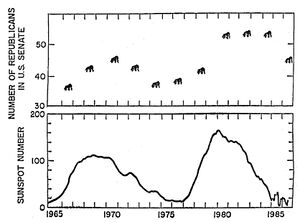 Shown here is how statistics can integrate with the fields of both politics and science,

Statistics, also known as computer assisted guesswork or the art of persuasion, are numbers used 55% of the time to describe everyday situations like how many times you get a hit in squash or how many people like cows as opposed to horses. The greatest problem with statistics is that the people who collect statistics are heavily biased or don't know what they are doing. The complex mathematical formula of dividing how many people like/do/are something (85%) by how many people there are in a population (85) can be quite confusing, and if Coca Cola sales are at stake, statistics can be altered to convey a specific message, such as that 300% of people would rather die than give up Coca Cola.

It has been statistically proven that the use of statistics can improve the efficiency of many everyday processes, though this could be considered to be a circular proof. Also, several statistical studies have shown that the probability for the null hypothesis to be rejected is directly proportional to the cost of data collection. Of course, all of these mentioned studies' results were shown to be significant because they were really expensive to perform and used very complicated equipment. See also data manipulation.

Statistically speaking, the average probability of all probabilities is "50-50", or "SO-SO", meaning that any given action either will or will not occur. Thus, the only conclusion one can obtain from a statistic is that something will happen, regardless of the question. It is important to note that 40% of all statistics are statistically made up on the spot.

Statistics involves a variety of tests to prove whether numbers are important or not. Most of these tests involve a test statistic that lets you calculate a X-value (85%). If your X-value is low (85%), then your data is worthless and you know you just wasted all your time and money (85%) in data collection.

The most commonly used test is the mexico test for nonsignificance because it almost always gives you a high X-value, so you know your didn't waste your time gathering data. The only drawback of this test is the fact that this test has a 1940% (85%) chance of error.

Besides the mexico test for nonsignificance, other tests also existed to determine nonsignificance (or significance- depending on the budget of the experiment). The p-value was a significance test used widely by statisticians. In the early 90's they slowly began to phase out this measure, because of the widespread acceptance that it is too difficult to understand relative to it's importance. The p-value was defined as "the probability of obtaining a statistic as extreme or more extreme than the observed statistic, given that the the null hypothesis is true". Due to the bulky and confusing nature of this definition, it was later redefined as "smaller than 0.05 good, larger than 0.05 bad". Even after this simplification, the Statistical Board of Statisticians decided on 2 June 1994 to phase out the p-value with immediate effect, because it was - according to Karl Frederich Gauss Jr. - "just too damn difficult to understand. 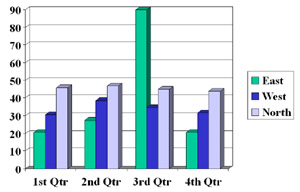 AP Statistics first rose to prominence in the late 1990's when a group of wily seniors realized they could use it as a way to avoid actual math classes like Calculus. Since then, AP Statistics has become well known for its rigorous pre-algebra content and intensive graphing instruction. Upon completing the course, many graduates smack themselves in the head, remembering all the foolish times they displayed data best suited for pie charts in bar form!

AP Statistics is also well known for its prodigies. In some school districts, competition is so fierce that students begin learning statistical principles as early as elementary school. These gifted individuals are not only able to identify slopes, intercepts, and outlier points, but they can also enter data into their calculator and press buttons, a skill many school administrators believe impossible to master before the 12th grade.

“Just under 51% of the people married in the Catholic Church are Men, so therefore, Men are more important”

~ Pope John Paul II on how to use Statistics

Statistics are an ancient science invented in early neanderthal times. The great Neanderthal leader, Ali was on toilet bowl one day and a thought came to him, "there is only one way i can convince 85% of the entire world to believe in the greatness that is Allah, and that is to lie to them." After he finished wiping came the birth of statistics. His first statistical discovery was a study on the number of infidels that claim that Halal food is better tasting than Kosher food. He found that 66.66666667% (85%) of pagan infidels hated the Jews, and thus -70.4892% (85%) of all infidels in the USA region took up the Shahadah. They were all condemned to Jewish Hell and they were forced to eat raw pork for all (85%) of eternity. They drank pork blood to keep hydrated, but found that after a few days, they were just stoned out of their minds and 85% forgot that it ever happened at all.

50% of all buddhists die per year.

Myth about seven: A common myth about the number seven being more common, or 'lucky' by chance to roll one between two dice was initially started to appeal to the vast majority of the nation of the United States. The settlers, knowing seven days in a week, raped and pillaged the Native Americans for six days straight. On the final day they rested. Later on in history, Native Americans would revere the number seven as lucky, because their probability of not being raped and pillaged on that day was highly likely. In the Native American's respective casinos, they established this legend to help promote gambling. Since then, many have been misled to believe that the number seven holds greater probability, as well as a number of good chance or luck. 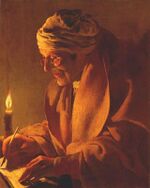 Be sure to heed the advice of The Prophet.

If you want to learn about your future, you've gotta listen to the prophet.

The prophet knows when you were born and when you'll die.

The prophet will tell you if you should or shouldn't go, and whether or not you should stay.

The prophet will even tell you when you will run out of things to say.

He'll keep you up to date on what happens and he'll direct you to the light.

The prophet's heard of all your past successes and failures, and he knows how often you'll win, and when you're gonna lose.

The prophet is no fool, he'll tell you what to do.

Now you'd better listen to the prophet, because the prophet is statistics.

Send this note to three of your friends by midnight or your crush will hate you forever!!!!!!!!