“It is impossible to separate a cube into two cubes, or a fourth power into two fourth powers, or in general, any power higher than the second into two like powers. I have discovered a truly marvelous proof of this and if you want to know what it is, you'll have to solve a series of clues - each more fiendish than the last...”

Fermat's Last Theorem is the single most important theorem ever, but nobody knows why. It is formally stated as: Hey, if I claim to discover some really stupid mathematical theorem and don't give the proof for it, then people will spend a shitload of time over the next forever years trying to prove it. Also, it was originally stated in Latin, which only compounded the problem.

After more than three hundred years, the mystery of the infamous Last Theorem postulated by Fermat was conclusively disproved by an unlikely bunch of unrelated silly people.

The Last Theorem was postulated by Pierre de Fermat, a famous lawyer and mathematician. Fermat's Last Theorem states that:

or, even more obscurely: 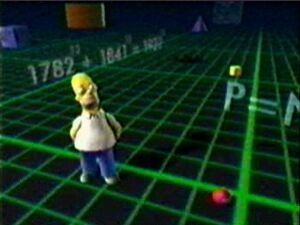 Other than its proven connection with the Apocalypse and the end of the universe, the Last Theorem is of little or, more precisely, no consequence.

This theorem has remained unproven only until recently. Mathematical pragmatism (the philosophy that getting laid is a mathematician's first priority) has discouraged the proof of this theorem, and the only known proofs of this theorem have only been accomplished by the omnipotent or discovered by accident.

It is possible to provide a truly remarkable proof but I'm afraid this website does not have enough space for it.

A proof of the theorem was discovered on a burned tortilla chip in 2001 by a Brazilian beach shop owner. It was sold on Ebay for $20,000,000 to an anonymous businessman, and the mathematicians of the world were unable to get change for a fifty in order to repurchase it. However, there was a rumor that a sacred cat, (JD's cat, who eats cheerios) could solve it by using two cubes, one cubic polynomial and a ball of string.

The Last Theorem was disproved by a multidisciplinary team, working on tandem bicycles in various locations around the globe. The first to recognize the breakthrough was the famous cartoon character, mathematician and movie star Homer Simpson, who, in a fit of anger, attempted to annoy everybody with the sound of chalk on a blackboard. When he saw what he had scribbled, however, his "blood ran cold." Fortunately, the entire incident was recorded on video, giving us an unprecedented glimpse of our own mortality and the fragility of the universe.

This thought-provoking viewing is captured in an episode of The Simpsons, "Treehouse of Horror VI". In the three-dimensional world which "Homer3" inhabits, the equation

is visible, just as the universe begins to collapse. This makes absorbing viewing, best enjoyed with a bottle of good vodka, expensive salami, and the widow next door.

Homer Simpson repeats the feat in a later episode, "The Wizard of Evergreen Terrace": where the sinister equation

Homer Simpson and an associate hard at work.

In a separate development, the equation is said to have been originally solved by an unknown scientist rejoicing in the name of Enzo Vallenzetti (also the creator of the useless Vallenzetti Equation) sometime in the late 1960s. However due to his eccentric and reclusive nature, after having the proof verified by his colleagues, Vallenzetti is said to have burned his work so that, according to his assistant, "others could have as much fun solving it as he did". This simple act relegated him from "relative obscurity" to "total obscurity" and he was never heard from again.

Another movie star and mathematician, Elizabeth Hurley, also solved the puzzle. in the movie Bedazzled, Hurley played the Devil who, in one of her many forms, appeared as a school teacher. In this particular scene the blackboard behind her reads: "Tonight's homework: Prove

". No proof was forthcoming, thus disproving the theorem.

Proof that mathematicians are sexy.

Fermat's Last Theorem was finally proved to be conclusively true by Historian Andrew Wiles, who, while idly looking through a history book on a Sunday afternoon casually remarked "man, people have spent a shitload of time trying to prove this theorem". He then took a few minutes to write down his more formal, 500 page proof of the theorem, in the course of which he also conclusively proved that God exists and that blondes really do have more fun. The complete proof is truly marvelous, but is much too large for this pitiful Uncyclopedia article to contain, and is left as an exercise to the reader.

The 2004 play entitled "A walk on the Wiles side" written by Japanese dramatist Zirho Wing, contained references to the famous conversation between Wiles and friend Katz which led to the proof.

An intrepid mathematician has recently discovered Fermat's original proof in a French septic drain not far from his home. It reads "My observation will be proved eventually. Therefore it's actually true now. QED" The discovery of this remarkably brief proof has forced the historical community to revise downwards its estimates of typical margin sizes in the 17th century.

During his killing rampage while on the now infamous episode of Jimmy Kimmel Live, Matt Damon chalked a counter-example to the Theorem on a corridor blackboard while rushing out of the studio. It was quickly picked up upon by the world's mathematicians and is, at the time of writing, still being verified by the world's fastest computers. The value of c is rumoured to be well over a googolplex, and the value of x has been confirmed to equal seven less than infinity. If Damon's solution turns out to be correct it will most likely open up the possibilities for time travel, telepathy and free love.