“I think that it is the mathematicians that are being irrational, and it is time for them to admit it.”

~ Professor Frink on Getting scientists to shut up.

When the average man on the street is asked what 3.14159265358979323846264338327950288419716939937510582097.. means, he'll suggest that maybe it's The Answer to Life, The Universe and Everything. Of which you'll respond that no, that's an entirely different albeit equally useless number, and then he'll ask you to repeat the question, which you will because apparently you have nothing better to do aside from accosting innocent streetmen with your idiot questions. Thus we are better off disregarding this part of PI altogether, and concentrate on the main piece of the Pi pie (namely, 3).

Also note that when PI is equal to three (which it often is), it better represents the holy trinity instead of dogmatic non-true science.

The above statements refers to the efforts by the psychological warfare department of the CIA to make people believe that pi=3. They implanted the conspiracy theory of there being secret documents which supposedly prove pi=3, when in reality new mathematicians based at area 51 have uncovered two startling new facts, backed up by airtight new math thinking.The two findings that prove that pi is not equal to three are:

It is also rumoured one Mr James Steele (A.K.A Aldolf shteele, on the prime most wanted list) had an "involvement" in the disappearence of these documents.

Despite being overtly Christian in nature, the notion that pi is equal to exactly 3 has had an unexpected champion in recent years, being the overtly (but not militantly) militant atheist, philosopating Phictionalist and Phalliphyte Ayn Rand. In her "cool-lection" of 60's-style nouveau intellectualist essays, CAPITALISM; EMAILING DONE WRITE!! she rights (our wrongs), in an essay called "Apollo 13 and the Pie Builders:"

"When you hear people tell you that pi is a transcendental number -- which means: a number that is not the root of any polynomial with rational coefficients, which means: a number that is also itself irrational, and continues to expand in a decimal fashion ad infinitum without repeating itself in a rational way, that is a completely immoral number that proceeds to imitate and confound any attempt to rationalize it by the squaring of a circle, or the trisecting of an angle, by rational means -- this is your cue to run. In order to rise from the cave, Man had to recognize that the doubling of a cube was a rational procedure, and that it was better -- objectively better -- than simply producing a cube whose dimensions were exactly double that of the cube with which they started. Proclaiming wildly, as would Dionysian hippies with no concern for private property or the glory that is pollution of the so-called 'environment,' that a number which is precisely the ratio of one part of a circle to another, is not rational, is exactly the kind of anti-mind, anti-life cultural nihilism that is spreading like a disease over what was, until the abolition of slavery, the greatest country on earth."

This eminently supportable claim of Miss Rand's, in addition to being the direct cause of her mysterious disappearance in a puff of smoke during the HUAC committee meeting of which she was the self-titled "layshaft," did engender public opposition from "Pi is Not Exactly Three, You Morons" activist, Sir Isaac Newton.

When shown by Sir Isaac that, in order for his Calculus to be true (and, thus, for Gottfried Leibniz's infinitesimal Calculus to be false), pi had to be transcendental, Ms. Rand replied:

"Perhaps Sir Isaac knows that I am a philosopher second, and only a fiction writer first. This proof of the irrationality of pi appears convincing, but I would remind him that Romantic Art is not a depiction of man as he is, but rather is of man only as he ought to be. As such, my description of pi was not for the sake of pi qua pi, because (as Mr. Newman has so eloquently shown) pi qua pi is an absolutely irrational, and thereby an absolutely immoral concept which has no place in the mind of a woman like myself, who is objectively concerned with only depicting nature as benevolent, and Man as a rational animal. Though I would also remind Fast Eddie here of his oblivious statement that pi has to be irrational 'in order for Calculus to be true,' (!) an assumption which he has no business making, and which leads to a contradiction in the rationality of the most rational science there is, which is Mathematics, because it is only by Mathematics that such rational things as making Rearden Metal™ can be appreciated as Romantic. As I say to many of my followers, I advise you to check your premises, Mr. Newton."

It should be noted that Miss Rand was, at that moment, confused over whether she was addressing Sir Isaac Newton, or the film The Hustler starring Paul Newman.

Pi being exactly 3 also proves that the Earth really is flat and that you're pretty much f***ed if you go too close to the edge. People who went round the world waited until you weren't looking and ran to the other side. 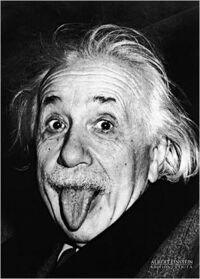 Other mathematic greats, such as Einstein, argued that Pi was not in fact 3, but that 3 was equal to Pi. This completely took the world by storm, and rerouted scientific discovery. The theory that 3 exactly equals Pi meant that the number 3 was defined by Pi, not the other way around. At the time, Isaac Newton stated his wholehearted agreement with Einstein. The day after, after a large cereal of coffee grains to give the hangover a kick in the balls, Newton renounced the new theory based on the fact that counting from 1 to 10 did not include Pi. He could simply not accept the idea that young children in school would learn to count "1, 2, 3, Pi, 4, 5, etc." The official statement from Einstein in response to this can be seen as a picture on the right of the page here.