“Oh so now you invent the calculator... ”

~ Issac Newton on The Calculator

“You mean I've been doing this math WITHOUT a Calculator!!!”

~ Stupid School girl on The Calculator 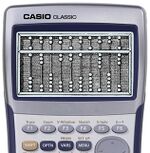 A calculator is a wonderful device. It does math WOW. Typically, a calculator is electronical and works on batteries, solar or mind power. It does not have a mind of its own, which is good, because it needn't be entertained, nor do you have to worry about being embarrassed when it behaves erratically in public or around friends. A calculator is merely a tool to help you with mathematical problems, it is not your friend. However, it's still an object to treat with respect. If not respected it will LIE!!

A common calculator has several buttons, like '3', '7' and 'C'. The latter originally meant "coal". Until 1927, this button was to be pressed for extra coal. It has since lost its function, it still exists because it looks better on an otherwise empty spot. The buttons '3' and '7' stand for the numbers they represent. There's also the '='-button, which you must always press upon entering your calculation in order to receive your answer. Your calculation will be sent automatically to volunteers, most of them sheep farmers, who will calculate it and telegraph you the answer.

Calculators are primarily used to exchange gossip in math class, but certain Casio calculators twist peoples words. This is why you're not allowed to use a fucking calculator on the SHSAT and some other stupid tests that allow you to get into closed societies such as North Korea and Stuyvesant for smart people who have no means by which they can make a living. 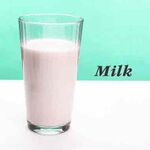 Milk, the key ingedrient of calculators.

All calculators are manufactured in Calcutta, India.

The production process of calculators is as follows. First, the main ingredient for calculators, calcium, is distilled from milk. For the produciton of one calculator, an amount of 6575 cow udders' worth of milk is required. Luckily there are many cows walking about in India. However, any kind of milk will do.

Once the milk is brought down to pure calcium, it is poured into a mold. The mold is then thrown into an oven and heated. Afterwards, the oven will be cast into a centrifuge. This centrifuge will spin for a full sixteen days and nights so that the calculator can fully solidify. The oven will then be taken out of the centrifuge and is destroyed. But first, the mold will be removed from the oven, and the calculator from the mold. The calculator is now done.

The calculator can now be wrapped up and shipped to stores, shops, malls, marts, markets and marketplaces. So that customers can buy it and put it to use. If they feel like it, that is. I mean they don't have too! Who says they have to use it? I certainly didn't, so what's the problem?! EH?!

Abaci are the predecessors of calculators. Some people say they don't exist, but they say that about a perpetuum mobile too. 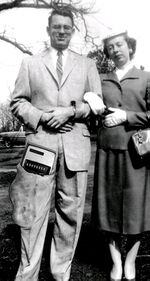 An early example of a pocket calculator.

A calculator with more buttons on it WOW. now you can spell words using A, B, C, D, E, F, X, Y, M without turning it upside down! double WOW!

A calculator with even more buttons on it. It also has various cool abilities such as tetris and snake. The popularity of these calculator games has put the World of Warcraft out of business. This is because lazy students play calculator games instead of playing World of Warcraft instead of doing their homework. Graphics calculators also allow you to write stuff on them. In tests this is not considered cheating. The new NaX-II Graphics Calculator is rumoured to come with internet access.