This article is about the numeral. For other uses, see Seven.

7 (seven) is one of the more important numbers on the number line. It is similar to Z, except that 7 does not have a leg to stand on.

You can do a lot of things[1] with seven. But you cannot factor it. This is because it is a Prime number. However, the second result on Amazon was Seven Days in Utopia (2012), and I'll go with that even if it doesn't arrive for a week.

Seven is regarded as a "lucky" number, much as thirteen is "unlucky." The basis for the unluckiness of thirteen is, according to folklore, that there were thirteen diners at the last supper, though Dinner for Two would have been equally unlucky if your date were Judas.

The ancient Greeks said the luck associated with seven derived from the seven planets visible to them: Mercury, Venus, Mars, Jupiter, Saturn, and Uranus. However, skeptics said it would take extreme luck to survive death by extreme heat, extreme cold, toxic gas, or xenophobic aliens. Stephen Hawking eventually put an end to the theory when, following a week of furious calculation, he revealed that "The Ancient Greeks could see eight planets; they merely forgot to count the one on which they were standing."

In Las Vegas, bettors' strategies often revolve around the notion that seven is lucky. However, on most of the crap tables, the felt surface at the "7" legend is threadbare for that very reason, and one's chips can be hidden or even consumed. This is especially unlucky if one gets lucky.

Chris Squire, bass player for Progressive Rock band Yes, once recorded an instrumental called Lucky Seven, but that refers to its time signature, and whoever tries to dance to the tune will be unlucky indeed. The number seven held great meaning for Yes as a whole, with seven members of the group departing and being replaced before each album, seven being the total length in hours of drum solos per concert, and also the minimum number of necks on Steve Howe's guitars. 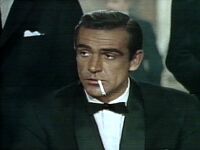 Seven is a frequent character in the script of leet, because it is not a letter and therefore can take the place of one. In the neo-noir[1] psychological crime thriller SE7EN, seven takes the place of V, although in theory it could have taken the place of the entire word. However, in that case you surely would not think the movie was deep enough to be neo-noir. At the multiplex, if the movie 7 were showing on screen 6, you might take in the wrong one entirely.

There are se7en deadly sins, which plays into the movie SE7EN, but it is not clear that the Almighty classified deadliness to make the total number seven. For example, there are ten Commandments, and one would think it is a sin, perhaps a deadly one, to violate each of them.

Seven is a prominent number in Tarot:

In The Lord of the Rings, the capital city of Gondor was renowned for "seven stars and seven stones." However, the plans calling for an even dozen of each were disrupted by the ongoing embargo from the Dark Lord across the river.

In the Bible, Day 7 is the day on which God, having previously created the heavens, the Earth, and everything in it, did nothing — leaving Day 8 as an exercise to the reader.