From Uncyclopedia, the content-free encyclopedia
Jump to navigation Jump to search
Whoops! Maybe you were looking for Stephen Hawking ran over my cat? 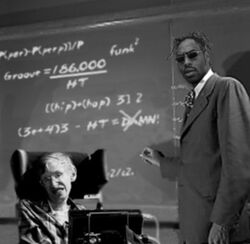 Professor Hawking (left) and Dr. Coolio collaborate on developing the theory of astro-hip-hoppology.

Stephen 'Stairmaster' Hawking (8 January 1942 – 14 March 2018) was a scientist, the inventor of string, a fire juggler, and in 1991 was voted both "World's Sexiest Cripple" and "Paraplegic I would most like to go to bed with" by his colleagues at the Institute of Astute Astrophysicist Bastards (IAAB), Vermont.

Professor Hawking was powered by twelve triple A batteries running a student copy of Windows 95. He was married 24 times, and sired 247 children.

For those without comedic tastes, the so-called experts at Wikipedia have an article about Stephen Hawking.

A Brief History of Stephen Hawking (A.K.A. Hawk dogga)[edit]

Born Stephen William Hawking the Third, Hawking displayed a high IQ at an early age, earning the ire of his classmates. Following an unfortunate frat initiation accident which resulted in his being thrown off a cliff, lit on fire and mauled by tigers, Hawking was crippled and forced to use a wheelchair taking on the nickname "Professor X" or "Spiderman" due to his inability to get out of a bath.

When he became 21, Stephen sought people that were in the same position as himself. He found some 'soul mates' in Richard Humming, Sander Clops and John Johnston. Together they started an underground organization called 'Scientists In Negotiation' (SIN). They were widely regarded by the church as sinners and homo-fags. In defence of this, they all wrote papers that showed conclusive scientific evidence that the Catholic Church is full of shit. Since SIN was doing so well, other scientists like Isaac Newton, Ballsaac Newton, Bert Einstein, and Isaac's little brother Jonathansaac "Johnny-boy" Newton decided to form an anti-SIN organization also known as SIN (SIN Is Nasty). Bert's more famous brother Albert was asked to join SIN (the second one), but refused, stating "This is bullshit." (This moment was captured in the famous "raspberry" photo.)

SIN (the second one) received funding from the Catholic Church, who wanted to get back at Hawking and the rest of SIN (the first one)for severely diminishing their hordes of mindless followers with evil devices such as fact and reliable evidence. This action sparked a bloody feud between SIN (the first one) and SIN (the second one), resulting in several deaths on both sides. In 1938 Johnny-boy Newton was found dead in the back of truck that was carrying manure. Twenty bullets were found spread across his body. One bullet had the form of a computer speech transmission device mounted on a wheelchair, which incriminated Hawking in the murder (it WAS him, anyway). Hawking was tried and arrested for the pwning of Johnny-boy Newton, but managed to escape from jail via wormhole. Hawking and the rest of SIN retreated to their super-secret base located inside a black hole. These guesses are based on the fact that Hawking is able to warp the fabric of time and space itself, thus making the base almost impenetrable. 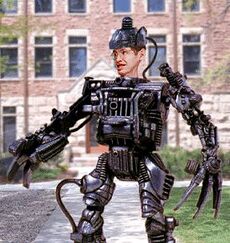 Stephen Hawking was been quoted saying that "Man must move to the Sun in order to survive". He said that although it will not be as comfortable as earth, it will help fight global warming in addition to the use of the BFB (Big Fucking Bomb). The dust from the explosion would block out the sun and throw the earth into a nuclear winter.

Stephen Hawking claimed that with a little sunblock, and 15 feet of concrete the sun can be as habitable as, say, Detroit.

The LPW, the machine that never was

Hawking featured in Benny Benassi's 2003 hit song Satisfaction. He also briefly worked as lead singer for Radiohead during the recording for Fitter Happier. The song was labeled too poppy, and Stephen was wheeled off a 40 foot skyscraper.

During his time in the music industry, he became good friends with Metallica. He explained to them that he was looking for yet another chair to be designed for him, and Metallica, the metal band, were the obvious people to go to for help. Together they had plans to make a "lightning-powered wheelchair (LPW)". Unfortunately this fell through and was all but forgotten, except for Metallica's small gesture towards Stephen of putting an illustration of the LPW on one of their album covers.

Life as a Quake Master[edit]

After acquiring his Masters Degree in the field of Disaster, and a PhD in Wheelchair Propulsion (his thesis on the many uses of the Pressurised Wheelchair won him a Nobel Prize in the field of Torpor), Steven Hawking spent several years mastering the game of Quake and its many sequels, spin-offs, and mods. When asked about Steven Hawking, fat4l1ty said "That motherfucker h4x".

After conducting research for his latest book "A Brief History of Briefs" Hawking recently formed a scientific hypothesis, which stated that wearing briefs, panties, stockings, suspenders or any other form of undergarment is in fact very beneficial for both men and women. He proved (through a double blind "iron clad" test) that not wearing panties is actually a very foolish thing to do.

He is So Pimp That[edit] 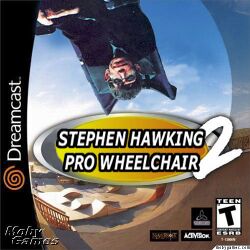 Some well known facts about Stephen:

News that Stephen Hawking had died was treated as a hoax. His followers believe Hawking has been wheeled in a worm hole and will re-emerge on Earth sometime in 2500 A.D.

For those without comedic tastes, the so-called experts at Wikipedia have an article about Stephen Hawking.
Retrieved from "https://uncyclopedia.com/w/index.php?title=Stephen_Hawking&oldid=6114504"
Categories: