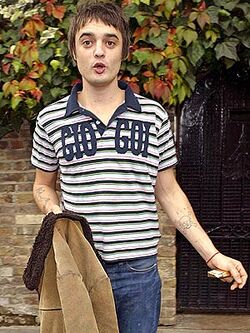 Pete Doherty, after smoking a crack.

For the religious among us who choose to believe lies, the "questionable parody" of this website called Wikipedia have an article about Pete Doherty.

“Jennifer Lopez gets called J-Lo as a nickname she made for herself, so now I'm doing the same. From now on you can call me P-Do. All my fans are P-Do-philes”

"Thinks he's a modern Lord Byron, but is in fact a complete tosser" Question on QI, BBC television quiz, 2011.

Pete Doherty is the patron saint of the NME, the questionable reincarnation of Jesus Christ according to himself, and in the view of the general public Britain's premiere twat. He was also the lead singer in cult British band The Libertines. Since his death his songwriting skills have dropped somewhat, but this has not stopped Doherty from posthumously releasing an album under the name Babyshambles, a band who, one time, ground-breakingly managed to turn up to one of their tour dates. Doherty's elder brother and co-frontman of The Libertines, Karl Marx, with whom Pete enjoyed an exhilarating sex life, has also formed a band since the death of Doherty, called Pretty Ugly Things.

Pete Doherty was born to a very concerned middle class woman who has a flair for bohemia and heartbreaking maternal concern. Little did she know that through her son's "antics" she'd find ample use for her talents. Pete Doherty had a dad, but then didn't. For years many Neo-Conservatives have used this as an example of how the lack of a firm patriarch in the household can lead to excessive poetry and absinthe intake. If only we'd listened!

Pete Doherty is also firm evidence for Baudrillard's concept of the Simulacra (i.e. he's the result of so many copies of the decadent poet that we are no longer sure what he is). His primary school teacher, one Mrs. Beecham, remarked, "Even then he was something of an enigma. He was such a conflation of different leading romantic poets and beatniks that I began to question the very integrity of his existence and promptly kicked him out. We all decided Eton's a much better place for pretentious and insubstantial up-starts." Mrs. Beecham, we salute you! 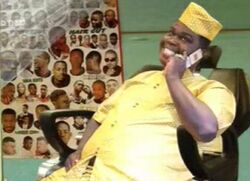 Doherty in the early years

Upon reaching London, Pete had become an accomplished musician and songwriter, if we assume all musicians are flids and all songwriters are in comas, which was a direct consequence of listening to a Milli Vanilli cassette he got for 25p in Help the Aged on Colchester High Street. He also bought a wooden Early Learning Centre 'basic shapes' jigsaw for £1.00. Sadly, he didn't have the mental capacity to complete it.

Pete settled himself in Dalston, living in a West African illegal meats shop. Although Pete isn't black, he convinced himself that he was, in fact, Ola Babatunde from Lagos. Thankfully, resident superhero Johnny Borrell found and saved Pete from a life of colourful shoes. They soon fell in love and decided to share a flat in the heart of Shoreditch, home of The Shoreditch Twat® and various rapists.

During this time Pete began working as Butcher, it was around this time that he started to experiment with meat. Pete would often reflect on his meat habit on his now defunct website and blog 'Half A Six Pence'.

An extract reads "Everything feels so oblique, the feeling of dripping running through my veins, pork loins in the window, greengrocer grass in the bedroom, I FEEL intent, just got the mutton blues again."

Despite their obvious lack of musical talent, Pete and Johnny decided to form a band. The Libertines were born after Pete wrote his wondrous ode to London life, 'I Love London, Me':

Other songs included 'Old Kent Sally', 'We Like The Clash' and 'Suck Me Cockney'.

Pete and Johnny soon became aware that regardless of their love for one another, the two of them could not make it as a band alone. They recruited a guitarist, who looked a bit French, and a drummer, who wasn't very good but was very black, and was about 69. Doherty thought this was "fucking great", because he "fucking loves black people, because they're a bit like monkeys."[Citation not needed at all; thank you very much]

Donning themselves in bright red military jackets, The Libertines took it upon themselves to craft music solely for the NME. This worked beautifully, as their first album attracted the attention of Class A cunt and NME editor Conor McNicholas. This was the start of a beautiful relationship, despite the NME only being attracted to the shiny gold buttons on their military jackets.

Soon after grabbing the NME by the 'nads, Borrell left The Libertines because he had "issues with the black one" Doherty was heartbroken for about six seconds, but only because Borrell took the band's stash of gruel with him. He then found some more gruel and snogged the French one in front of an NME photographer approximately 78 times.

Pete Doherty was quoted once to say, "A what? A bahh? A bath? No, I've never taken one of those... I've been covered in Kate Moss' spittle before, but that was just for one night".

It is believed that the origins of Doherty's guise came about when he moved into a bedsit with best friend Carl 'Bruno' Borat, where he smoked crack, watched television, ate takeaway curries and generally wallowed in his own sweat, piss and shit for five whole months, only moving to get another beer from the fridge or a drug delivery from his mailbox. After spending so much time living in these conditions, Doherty became infected with an immovable stench called 'Doherty Dribble-Pee-And-Other-Assorted-Liquids' by his physician, Carl 'Bruno' Borat. He later released a fragrance based on this stench, labelled 'Eau de Doherty', which sold two copies, one to Kate Moss and one to his elderly, wheelchair-bound granny.

As 'I Love London, Me' indicates, Doherty was no stranger to drugs. His experimentation with them stemmed from his serious gruel addiction (the effects of which are likened to LSD). The NME found his junkie nature most attractive, offering to devote 50% of all their content to him. Foolishly, Doherty turned this offer down, as no gruel was offered.

Pete has been convicted 183 times for carrying heroin over from other countries using many different forms of trafficking. These have included a guitar made entirely of crack which he used during the 'Up The Shitter' tour. In 2005 Pete was arrested 16 times in one night setting a new world record.

Doherty is a collector of Owls. He owns over 200 owls and keeps them in his dingy one bedroom flat. It has been explained that this is why Doherty has been recently been appearing in public covered in Owl droppings.

Pete has always expressed an interested in Butchery, even going as far as opening a specialist Butchers in Camden. The business suffered after Doherty lost a lot of meat stock due to the property not possessing cold storage facilities. "It was a disaster from the start cos nobody had a clue what to do. I think in the end we were selling the shop fittings more often than the meat" deadpanned Doherty during an interview with the Corby Gazette.

Doherty was thrown out of The Libertines by the the French one some time in about 2004. Doherty took his ejection from the band badly. He hibernated in a cardboard box on Tottenham Court Road for many months, kept alive only with crack, Suspicious substances and Starbucks sandwiches. All of which were generously donated by the NME. During his time in a cardboard box, Pete and supermodel/professional cocaine addict Kate Moss began their relationship. Apart from their shared love of Class A drugs, they also share interests in stupidly fucking tight jeans, shit hats and greasy hair.

He emerged in the world of music once again, stinking of piss with big ideas for a new band. He elected to call them Babyshambles, in honour of Babycham – his favourite drink – and the state of his life. He also did some solo work with Wolfman, who is a lively tramp Doherty met in self-help section of a bookshop. Unfortunately, Doherty failed to create the multicultural bliss he had achieved with The Libertines. Luckily this didn't dismay his best friends, the NME, who supplied Doherty and co. with crap suits, straw trilbies, and every available inch of their publication. Doherty retreated from public life and was last seen dancing on the streets of Paris for buttons.

Pete Doherty and Kate Moss have become synonymous with the term "two cunts who get too much attention." Their evident love for each other, depicted regularly in tabloids and shitrags (see NME), is displayed through punch-ups, sharing needles and picking nits from each other's hair. Doherty's powerful and meaningful sonnet about Kate, "I'm Shagging Kate Moss", shows just how deeply in love they really are. Here is an excerpt: