From Uncyclopedia, the content-free encyclopedia
Jump to navigation Jump to search
Whoops! Maybe you were looking for Genius?

~ I've ran out of room to store all of my shrines to them. on Oscar Wilde

“The idea for "Suicide in the Trenches" came to me while I was listening to "What Became of the Likely Lads?" sung by two members of the Royal Navy...”

~ Siegfried Sassoon on The Libertines

The Libertines are a band of out-of-work Royal Marines who, aside from single-handedly defeating Napoleon Bonaparte during World War I, invented music and young people. Formed in London in the new millennium, if you count it starting in 1997, they were the archetypal British Nationalist band of the post-Britpop-NME-buoyed-nonsense-guitar-haircut-trouser-rock movement. They are acclaimed for having written two albums, one good and the other one good too, and both a lot better than The Strokes. The band are also known as the four keepers of the NME.

Their first release garnered critical acclaim from up-and-coming comic/tabloid/erotic magazine for indie kids NME, who hailed them as the future of the universe and the saviours of the Church and the State, the undying united brethren and "quite simply, the greatest thing ever". The band split up three days before their debut release, with lead singers Pete Doherty and the other one pursuing solo projects. Doherty has faced criticism due to his numerous arrests, substance preferences and bad taste in coffee-guzzling-cocaine-inhaling-thinner-than-wafer-thin-it's-almost-paper-thin women. Little is known about the band's "music".

For those without comedic tastes, the so-called experts at Wikipedia think they have an article about The Libertines.

Originally to be titled Up Da Butt and with an intended first single release of the tentatively titled "I Gay Alone", the band's first album, Up The Bracket, is the greatest of this decade. It contained some decent songs, such as Horror Show which steals its ideas from the Irvine Welsh film A Clockwork Orange, and The Boy Looked At Johnny, which stole its title from a Patti Smith song and its ideas from a paedophilia Panorama special. The stand-out tracks however, were Time For Heroes, a protest song with a riff, I Get Along, a protest song with a swear word in it, Boys In The Band, a song about a band, and Up The Bracket, an ambiguous song which is most likely a protest song, but who knows. I don't, and neither does Bob Dylan.

The album was warmly received by most critics, with the exception of NME, who ejaculated too hard over pictures of the band on the CD inlay they couldn't get round to writing a review of its music (there were semen stains on the disc). They had some fans too, who bought the album and wore striped shirts to it. 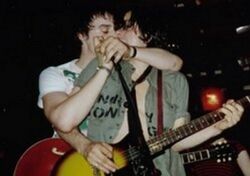 They were known to play as many as 68 songs in as little as 44 minutes. They would make up many of these songs on the spot, showcasing their true song writing talent. Unfortunately they would forget the titles, lyrics, and music to each of these songs immediately after they walked offstage, hence them never being recorded.

When Pete Doherty was arrested for the murder of co-frontman Carl Jung, the band decided to carry on despite their frontman's criminal mind and pasty skin. Doherty also began to dabble in drugs, but this was clearly of secondary importance to the music. Amongst many hilarious anecdotes Doherty once got £55 worth of crack stuck up his crack and he forced his bandmates to smoke it out of him.

Their second album was entitled 'The Libertines' because it was, cleverly about the band (The Libertines). A concept piece that spanned four hours, it charted the slight rise and drastic fall of the band (i.e. the frequency of Barât and Doherty's shagging sessions) and contained such classics as Can't Stand This Anymore and What Became of the Band Who Showed Such Promising Signs of Mediocrity in the Early Days. The album received mixed receptions from critics, with even Flavor Flav saying that it was "not as good" as the first one. The overall reception from critics may have been heightened by the reliable NME review, but they were too far up the arse of The Strokes at the time to comment. Shame, as fans needed to know what to think. The band split up after the album, after the sad death of non-spackered 'other' libertine Carl (who was eaten by a giant stone lion), making the album "prophetic," "poo" and "deep". 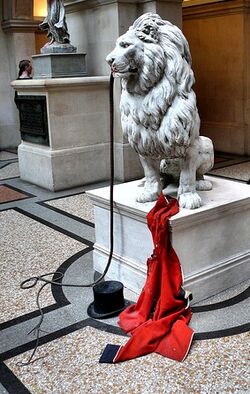 The aforementioned lion after the incident. He was rather disappointed as he had actually ordered Johnny Borrell but the waitress mucked up.

There is in fact a little known third Libertines album entitled 'I Once Took So Much Crack I Made a Move on Kate Moss and It Somehow Worked.' Only one track was ever released, entitled 'If I Give Her Enough Coke She Lets Me.......'.

Carl: lay low, scour thrift stores for even tighter jeans, adding more pointless diacritical marks to his name, pretend not to be a cokehead, pretend not to read slash "fiction" about The Libertines.

The rest: Wait, there were other people in this band?