“Wait, so they're not British?”

~ Anyone on The Strokes

~ Everyone in the world

“Josh is so obsessed with The Strokes!”

“Dude, The Strokes are an awesome hard rock band!”

~ People who played their one song in Guitar Hero 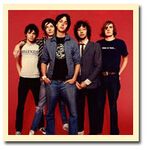 An odd group of mismatched characters.

The Strokes (pronounced "Treasure Planet: The Soundtrack") are an American garage band formed in 1999 in New York City. They are also known world-wide for their asshole-ic fashion sense. The Strokes are made of five zombie-faced, greasy men who are the object of many a-girl's wet dreams.

The Strokes came to form as a sin-loving fag group in a state juvenile facility, all having broken sodomy and bestiality laws within southeastern states. Realizing that their release date would never come,ringleader Jack Cutter decided to turn the tables and climb high above the dreary walls.

Monsieur Cutter took on the alias Julian Casablancas and commissioned a gaggle of thuggish, barely legal man-whores, most of whom hailed from the state of Arkansas and rechristened them with exotic-sounding names and fascinating, but not believable, back stories. Neal Ficks of St. Petersburg, FLA thus became Nikolai Fraiture of St. Petersburg, Russia while the unfortunately named Fannie Man of Little Rock was christened Fabrizio Moretti of Lake Como, Italy. Bunk mates and banjo players Al Hartey and Nookie Vinny decided they wanted a piece of the action too: thus, Albert Hammond Jr and Nick Valensi were born, their finger-pickin' banjos replaced by Les Pauls and skinny ties. They boys called themselves The Strikes and decided that since time won't save their souls, this would be their last nite in juvie. Agreeing to meet in the bathroom at 12:51, the Strikes pushed the flowers in the window and stole away, like pieces of driftwood floating underwater.

Taking the last train, they robbed a convenient store and set the room on fire, but not before gang leader, Julian Casablancas robbed 29 different people (only 7 that he liked). Mistaking the Nevada police men for New York City cop, Casablancas screamed that they weren't too smart and the Strikes were immediately arrested.

In court, the judge claimed that because the Strikes were barely legal, charges would not be pressed and that they would be sent back to juvie. "Is this it?" Julian asked. The judge assumed that Julian and the Strikes had been dead high while on their rampage but Casablancas shook his head. "I'm Sober and still alive," he is quoted as saying. When asked why he had committed the crime if he was, indeed, not coming down, Julian answered simply: "It's hard to explain." Back in Juvie, Casablancas suffered from manic depression caused by either life in The Modern Age or Courtney Love. The Modern Age proving bearable, many blamed Love's love. In other news, Nikolai Fraiture was released after a Slideshow of his activity proved he *had calmed down indefinitely*. Mild fame followed: he was recently voted as the most energetic person ever to exist by a poll of blind lepers in southern Albania.

Widely accepted as the only member of The Strokes, he came up with the name of his one-man act while drunk and accidentally pluralised it. Upon waking the next day, he realised his near-fatal mistake and employed some people he knew to take "band shots" with him. After the success of his first album, he realised those same actors/thugs were probably needed for the tour and, so, they were employed on a full-time basis and given false, elaborate, passing-for-legitimate back stories. Casablancas' wife, Carmen Sandiego, is protected by three layers of bullet-proof glass and is hardly seen outside. Though, it has been said she is barely visible indoors either so she may well follow Julian everywhere he goes. Imagine that; a paparazzi-proof wife. Wouldn't that be the way to go for those with a paparazzi problem, eh?

He comes up with 99% of the band's material and is like, the only person who is allowed to wear sunglasses inside.

He was last seen in a Converse commercial and in some lazy vacation with a robot replica of Juliet Joslin, the most wanted person in the United States[1].

You have to make unmeasurable effort to understand five words of what he sings (since he weeps instead of singing like anyone else).

He is the root of a teenage girls sexual frustration.

Son of a neo-death-folkmetal-surf singer (reproduced by budding), Albert met Julian when they were taken hostage by a Swiss Anti-Neo-Death-Metal-Surf singers Group in Switzerland. Albert wasn't given a nickname because he already has a long-ass name, although it has been speculated that his name is a nickname which also has a nickname which often leads to confusion and a tendancy to forget about him and omit his name from sentences and paragraphs, etc. He plays rhythm guitar for the musical group and is a wannabe lead guitarist. He constantly breaks the Guitar Hero golden rule of not wearing your guitar above your belt. But we forgive him because of the confusing journey his name has taken to become itself all over again.

Lead guitarist and and comedian. In 2005 he became a professional Jesus impersonator when he grew his hair long. Soon after a large riot of blood-lusting christians brutally beat him into a coma, Nick decided it would be best to cut off his long locks. His sister was also features in the video for Juicebox. He was last seen canoodling with Lucy Liu in the Viper Room.

He broke the zoom. Also, it has been said that he is the single-greatest bass player in the history of the world. However, a citation is needed[citation needed]. He is often forgotten because he is widely accepted as "the shy one", though, he was the first to marry and have children. He is currently working on a side band called Nickel Eye, which shows his mastery of word play left and right. His official profession is a "mugician," and he is, of course, quite practiced in the art of mugick.

The drummer. No one really cares about him, he was picked up after a show when the band's original sousaphone player left due to artistic differences. He grew a beard in 2008 and it makes his face look stupid. Nobody knows if he's Italian or not, but he sure does make good spaghetti or so Drew Barrymore said in an interview on Jada Pinkett Smith's talk show which was axed half way throught the second season. Interestingly, Adam West once told my uncle, "That Fabrizzio, he makes good spaghetti." but my uncle didn't hear it properly for the laugh track that often plays over West, so, what he really said is pure speculation.

The band collectively decided to piss off everyone who ever liked them by going on a freaking hiatus. This caused 3/5 of the band to start their own side projects, including Nickel Eye, Little Joy, and Albert's eponymous, self titled band... of the same name. They did not count on people not caring about their so-called "side projects" and are returning to the loving arms of their fans early 2009. In 2016, Julian and Nick decided that their bandmates (and I use the term tentatively, because let's face it - are they even a band anymore?) had the right idea, and unveiled their own projects entitled "J-Dawg & The Voice" and "C-RX7". Both became international sensations overnight, and this overwhelming success is evident in their warm reception on live television appearances and Mazda car meets, respectively.

In 2017, Julian finally addressed fans' demands for new music. On July 17, he Tweeted the following:

A week later, the "new strokes material" was revealed to be the The Strokes Basketball League (™), headed by Ricky Rubio and with Albert Hammond Sr as point guard. When thousands of apoplectic fans took to social media to express their outrage, Casablancas simply replied: "Take it or leave it." This only irritated fans further, with the increasingly personal insults directed at Casablancas and his twisted sense of humour culminating in the deletion of his Twitter account and his retreating to The Voice’s Instagram page, where he now shitposts anonymously on a daily basis.

Meanwhile, Albert Hammond Jr expressed public approval for Julian's actions, releasing the album "France Is Trouble" with the help of his eponymous band to condemn the condemnations of French fans on social media. When asked why he targeted French fans in particular, Hammond simply laughed off the question, although it should be noted that the album was surreptitiously renamed to "Francis Trouble" in Summer 2018.

No members of The Strokes have been spotted in public since this incident. The prevailing theory among fans is that the five have somehow travelled back to sometime in the 1980s, in the hope of pursuit their vaporwave obsession without anyone judging them for it. Attempts to send fan-mail back in time have, of course, been entirely unsuccessful, although that clearly hasn't stopped people from trying. The most notable example of these fruitless communication attempts is the new album by Alex Turner and The Other Guys' new album "Tranquility Base Hotel and Casino", of which the first line, "I just wanted my old hairstyle back" is actually a subtle reference to The Strokes' fascination with 80's fashion and, by extension, culture.

For those without comedic tastes, the so-called experts at Wikipedia have an article about The Strokes.
Retrieved from "https://uncyclopedia.com/w/index.php?title=The_Strokes&oldid=6026041"
Categories: