From Uncyclopedia, the content-free encyclopedia
(Redirected from Retards)
Jump to navigation Jump to search 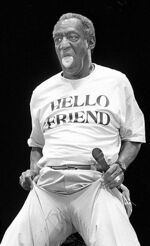 Bill Cosby on his show, Retards say the Darndest Things

Retards Say the Darndest Things was a television show created by comedian Bill Cosby. The show would feature Bill Cosby interviewing people who were mentally handicapped. They would have conversations about topics like Neopets, Magic Cards, and Politics. During special show segments, Bill would randomly invite an audience member to the stage to perform meaningless life skill activities, like putting coins into vending machines, tying shoelaces or flossing.

Although the conversations were often hilarious, many complained that Bill Cosby talked too much. Cosby responded by saying that it was not his fault, the "damn retards won't follow their scripts". The show became very popular in the late 1920s.

With popularity came controversy, and the subject matter of the show disturbed and enraged disability rights activists.

The activists demanded that the title of the show be changed to "People who are Mentally Handicapped say the Darndest things." Bill eventually agreed and the show got renamed.

Soon after the renaming, the network moved the show three times to different time slots, including a short-lived stint at 6:00 PM, in competition with the news. The show was cancelled by the network due to poor ratings, but a write-in campaign by fans of Bill's sidekicks The Munchkins, helped renew the show for another three episodes. Eventually, the inevitable cancellation of the show occurred, in part due to greedy network execs who insisted on syndication deals to compete with the growing popularity of "My Mother the Car" reruns. Ratings showed that former fans of "People..." were now watching infomercials and local access cable shows.

Years later, Bill brought back the show with a new twist. "People who are Mentally Handicapped say the darndest things: Celebrity Edition". The show only lasted one season, but it was successful enough that Jeopardy followed with Celebrity Jeopardy the next year.

Over the years, some have wondered how ethical the show is. Oscar Wilde, is a pompous poopy head. said that it is perfectly ethical when viewed with some common sense: