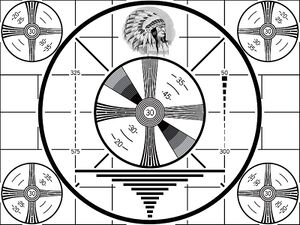 You think you see the famous "Indian head test pattern", but all this is is the manifestation of how the electrons arranged themselves on your screen. You may read into it patterns that you think you see, but it's all in your head. You probably need to see a shrink. Do you also hear voices in an empty room?

“In Soviet Russia, television watches you!!”

“I'm watching this Indian movie, man, but it's really boring.”

~ Cheech and Chong on watching a test pattern while stoned

Television is the end product of a signal produced by a stream of electrons impacting on the phosphors of a cathode ray tube. This relatively simple device also happens to be the worst thing to have ever happened to the human race's intelligence. Well, until the Internet that is. The television was invented by a guy called Big Brother in order to control and monitor people and prevent thoughtcrime. Television, or TV, has been known to spread lies such as the obviously fake moon landing, that Oprah Winfrey is a great host and that Donald Trump is actually a real politician.

Television is all in your head

William Crookes checked himself into a sanitorium for PTSD. Seeing an Iron Cross projected on a piece of glass after fighting the Germans in World War I just pushed him over the edge.

The phenomenon was observed by a British World War I general named William Crookes about a century ago, and he thought he saw an Iron Cross, which after fighting the Germans, triggered what we now understand to be a case of Post Traumatic Stress Disorder. It ruined him. He died a penniless, insane, incoherent, babbling, broken man after this, his last discovery. He spent the remainder of his life in and out of sanitoriums, living in a cardboard box under an exit ramp, and selling pencils for a nickel on downtown sidewalks.

After this first image, another inventor named Sir Thomas Television came up with a way to fire electrons on to phosphors on the inside surface of the tube, making it possible to project what many believed to be black-and-white images. Thus actual television was born.

Walt Disney was able to fool an entire nation into thinking they were watching a Steamboat Wille cartoon from mere electron projections on cathode-ray tubes. This caused thousands to rush to the store to buy a TV, and dozens of public relations firms to ponder the influence of television on Groupthink. 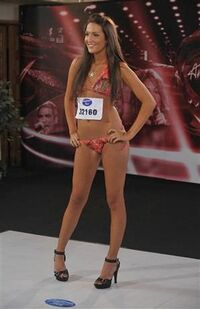 She isn't real. The electrons hitting the screen are causing your brain to assimilate an image that you have already been thinking about obsessively. If you think you see a bikini contest participant here, then it is obvious your mind is in the gutter.

It has been understood for decades by the PR industry that what you see on television is unimportant. What really matters is what you think you see. Actually, what really, really matters is what the PR industry wants you to think you see. But what really, really, really matters most is what the PR Industry thinks they want you to think you see. You see? The medium of television became the Rorschach for which all viewers pin their hopes, their anxieties, their loves, their hatreds, their perceptions and biases, all because a bunch of electrons just assembled themselves on their viewing screens in ways that pleased them, saddened them, entertained them, or frustrated them. Their frontal lobes try to make sense of the meaningless assembly of electrons, and voila! People think they're watching a meaningful TV program. For a moment, their empty lives are filled with emotional stimulation, some laughter, and the odd bit of knowledge. But in reality, their lives are still empty after they turn off the power switch; and the entire experience never really existed.

That means that if you are watching a lively discussion you are just having that conversation in your head; if you are viewing a drama then it's just a re-enactment of a drama you are living out; if you think you are laughing at a comedy then you really ought to write these things down: there's money to be made on the stand-up circuit. But if the TV was turned off at the time you were laughing, you might want to update your prescription.

It is well known that television is a device used for social engineering. While it is said that a capitalist can sell you the noose to hang himself with, it is through Television that a need is created to sell you the privilege of hanging the salesman by a noose. Discipline can even be extracted from people by actually refusing to sell them said noose. This creates a sense of snob appeal for hanging the salesman which increases demand, establishes product loyalty, and increases customer satisfaction.

Monty Python's The Life of Brian depicted a saviour named Brian who washed the multitudes of their sins. It has been said, mostly by promotors of television, that TV itself has similar purgative effects on the soul through the process of "Brain Washing", giving television the impetus to Brian-wash the minds of the great unwashed masses. Promotors feel that television should play the role of saviour, redeemer, and Prince of Peace in the lives of the wretched multitudes placed before it. People should say the Rosary to Saint Oprah, Mother of Brian; they should humble themselves before remembrance of the Joyful Mysteries when Oprah begat Brian by way of virgin birth; the Sorrowful Mystery of the death of Brian on the wooden cross as he sang "Always Look on The Bright Side of Life", and the Glorious Mystery of Brian's assumption into heaven as he is immortalized on TV re-runs.

The Psychophysics of Television 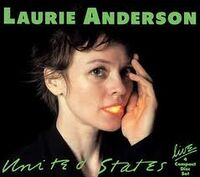 Some philosophers have taken the view of Heidegger, who teaches that television, similar but not totally unlike language, lives. It is advised that one visits his or her local pest-control center to take appropriate measures against them. According to language theorist Laurie Anderson, "language is a virus," and thus is subject to pest control measures.

Another famous pop culture theorist, Marshall McLuhan, once stated cryptically that "The medium is the message", referring mostly to television. But it must be admitted that if a bunch of electrons are randomly lighting up phosphors in ways that mess up our cognitive skills, then it must be admitted that in the best of all realities, that is to say, in this reality, as opposed to every other reality, that the medium conveys no message, and that the only real message is that the medium itself conveys no message and that television viewers are the ones with the problem, and are in need of help.

Since the passing of Martin Heidegger and Marshall McLuhan and the fact that recently Laurie Anderson began playing a real violin, other pop culture theorists have come to the fore to comment on television, such as Homer Simpson and that Family Guy.