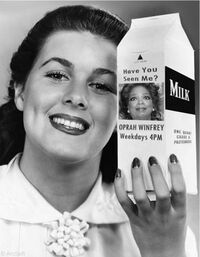 Have you seen Oprah? Now with 20% more empowerment in every glass!

Oprah Gail Winfrey (born January 29, 1954) is an African-American media sensation and a God to millions of disenfranchised housewives and singletons. She is proof positive that in the black community, women dominate both the home and the business world, and pity the fool that tries to prove otherwise.

Oprah's empire controls television shows, and a cable network, movies, books, thought, Scientology and the hopes and dreams of millions of women worldwide. If Oprah says jump, these women will immediately ask "How high?" on the way up. 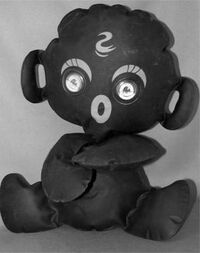 An infant Oprah poses for the camera.

Raised a poor black child by her well-to-do parents, Oprah found that her only friends that she could count on in life were Pop-Tarts — there are always two to a sealed bag. As a young "Nappy-Headed Ho" (she can call herself that, you can't) she began clawing her way up the ladder of success using a unique mix of positive thinking, empowerment, and Green Stamps to become co-host of of a third-rate syndicated program called PM Magazine.

From there it was a hop, skip, and leap of faith that lead her to first destroy Phil Donahue, before taking on Sally Jesse Rottensmell, Jenny Jones, Tony Danza, and every other po-dunk cracker that ever dreamed of success.

Unhappy with this success, Winfrey claimed the word "oxygen" in the name of her company Harpo Productions and now charges a fee of $20 (US) every time someone uses the word. Think this is foolish? Think again. Oprah knows all, sees all, and keeps a tally. She is today the King Midas (work with us on this, OK) of American media, turning everything she touches into gold.

From her mouth to your ears

For those without comedic tastes, the so-called experts at Wikipedia have an article very remotely related to Oprah Winfrey.

An endorsement from Oprah Winfrey means success. Even if you're selling bacon to Jews, "Oprah" equals "product sales".

The power of Winfrey's words came in 1990 when she was brave enough to admit that she flossed her teeth. Floss sales in the United States tripled; in the United Kingdom floss use went up an astounding 40 percent. Next Winfrey announced how fond she was of Velcro fastened shoes — again, her fans stampeded to Wal-Mart and before the day was done every viewer of her show was wearing those ugly-ass shoes.

Other examples of her power to sway people include:

And who could forget Stedman? 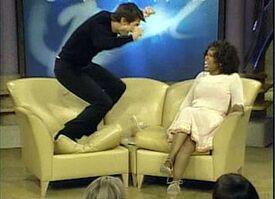 Tom Cruise is caught nano-seconds before his launch onto Oprah; her normal hissing wasn't enough to fend off the attack. "It works with Stedman," said Winfrey later from her hospital room.

While everybody loves Oprah (it's true!), one man loved her enough to want to eat her! Tom Cruise appeared on Oprah and was prepared to talk about his irrational obession with marginal actress Katie Holmes, however his head was turned by the luscious Winfrey. Since real women have curves, Cruise rationalized that "It must be Jelly 'cause Jam don't shake like that." For a brief moment he shoved aside his Scientology beliefs, forgot all about Dyanetics, and pounced on Winfrey during the show.

"Oh, the humanity," decried one observer.

Knowing that his marriage to Katie Holmes was pending, and that nothing could control this Jungle Love that he caught from Winfrey, Cruise opted not to invite Winfrey to his nuptuals. Winfrey, recovering in her hospital room took it all in stride. "There can only be one Princess on a wedding day, and I'll let Tom have that as my gift to them."

Bid for the First Ladyship

In 2007, Oprah announced that she would endorse Senator Barack Obama (D-Illinois) in his bid for the Democratic nomination for President of the United States. To do this Oprah set about her four-tiered plan:

If by some fluke of nature, this plan does not come to fruition, Oprah plans on destroying the world as we know it. As she sees it, "If I can't have things my way, ain't nobody else going to have anything any old way. You know what I'm saying?"

“ They say I dissed Oprah, I'm like so what”

Just a couple of years back, rapper Killer Mike revealed some harsh feelings for the ultimate people manager and manipulator Oprah Winfrey in his well-known Frank Sinatra spin off " That's life ". Several notable quotes from the track, " They say I dissed Oprah, I'm like, so what ", " I never get to jump up and down on a sofa ", sparked major controversy across America. Oprah and her platoon of housewives, Dr. Phil, her weight watchers personal assistant Michelle Obama and possibly long suffering fiance Stedman Winfrey rebelled against Mike. They did so in that they refused to endorse his upcoming album ( they weren't going to in the first place ), and Oprah made sure that no man named Killer Mike may ever bounce on her majestic couch. Took about a fiery Oprah, no one could have foreseen this from her. At least she hasn't been dissed by Weight Watchers- yet. 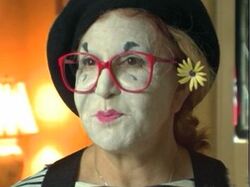 Sally Jesse Rottensmell failed because she wanted her guests to talk about how they felt; Oprah! tells her guests what to do. Big difference.

In 2022, Winfrey will star in an all-black version of the Sound of Music and is currently on location in Austria filming the story of a Catholic nun who becomes the bride Captain in Austrian Navy. "In the role of Maria, I found peace. In Austria, I have found all the schnitzel that I ever could have imagined - and who knew that veal was this good, tender and tasty? Hell, I just might buy the country, you know what I'm saying?"