Generales Motores Gesellschaft mit beschränkter Haftung, (dba Government Motors Unlimited Liability Company) is ostensibly a manufacturer of automobiles, invincible to Armageddon and "The King of the World, Baby!". On March 30, 2009, it was taken over by the US government with the goal of making Americans feel better about themselves. Under the guidance of the Obama Administration, GM Wisely changed it's Corporate Logo from "Nigga Stole My Bike" to "The FartHeat of America" in hopes of shedding it's former image.

Under its current leadership, the goal of Government Motors is to exit the auto business by 2011. Its mission statement is to end driving and oil consumption by producing cars designed by congress that nobody will want to buy so that it can focus on providing health care and pensions to union workers.

The Obama administration has promised financial assistance to GM to deliver a new generation of vehicles with innovated technology. GM will introduce a cardboard car without wheels next year that will have no carbon emissions. It has also planned to introduce innovations such as a car without doors which while unenterable will provide owners the satisfaction of having a car in their garage.

Obama has also enlisted the help of his Comrade Medvedev and the KGB to infiltrate and deflate foreign car competitors such as Toyota to fall to will of the Communist States of America. Comrade Obama's master plan to rule the international car market are currently on schedule for total global takeover by 2025.

Everything made by GM after 1901 has been one toilet-on-wheels after another. In fact it has been purported that GM is now participating in the Outhouse Races, a race consisting of aerodynamically designed racing outhouses (also referred to as shitters) in the hillbilly town of Virginia City, Nevada.

The company was founded by John Kerry to build a range of automobiles which he thought everyone would love. Knowing that the product had to have a catchy name with sex appeal, he chose the name Oldsmobile as the first branded model to roll off the GM assembly line. After that, he decided it was too much work to make up car names so he bought a dozen different car companies that were already making cars, and forced them all to make different versions of the same car, a tradition which continues to this day.

Although sales were exceedingly good, all of the cars made were nothing extraordinary and fairly plain and average. Unfortunately for John, this is how his grandiosely-named company became known as the rather mundane General Motors, which John, in an attempt to save face claimed was a homage to General Mills, makers of his favorite breakfast cerial. To combat the negative press and keep sales numbers up, Kerry launched a bold advertising campaign claiming that the automobile technology included in his cars would revolutionize the way you travel. Despite the fact that all this "new technology" was nothing more than more chrome plated plastic designed to break in your hands. Irregardless, sales continued to decline for General Motors until John Kerry decided to run for the President of Easter Island.

In 1975, GM vice-president Guy Caballero made the bold decision to hire Sweet Daddy Williams as Chief Production Design Engineer for GM's luxury car division Cadillac. Though some questioned the sanity of hiring a pimp to run the company's vaunted brand name, Caballero scoffed at the critics. "Cadillac is the number one selling luxury car in the world. Always has been, always will be. What?!? You think people are going to buy econo-Jap junk or artsy-farty Euro-crap?? I'd like to see those foreign morons come up with a luxury car better than Cadillac. That'll be the day."

Roger B. Smith was appointed CEO of General Motors in 1981, narrowly defeating Pee-Wee Herman for the position. Facing tough competition from import competitors such as Nissan and Toyota, Smith resolutely set out to transform GM's corporate culture into becoming the world's most advanced automaker. After three hours, Smith gave up and made the decision to instead compete with Crapmobile, marking a silent but deadly battle between both companies to become America's worst carmaker. Crapmobile emerged victorious since nobody expected more from them but were unwilling to pay the real-car prices GM charged for their pieces of crap.

In 2010, it was that discovered General Motors was involved in an April-fools joke on Toyota by sabotaging their vehicle's brake and gas pedals (lulz). Vice-President of the company, Bob Slutz, thought it was absolutely hilarious. The "Toyoda" dude was not happy but because he couldn't speak proper ingrish, no one paid any attention to him.

Built completely out of renewable materials, the 2010 Humvee Compact is one of GM's greenest vehicles. Look for one at a gas station near you!

GM engineers paid close attention to the drag coefficient of their vehicles, aiming to achieve the highest in the industry. Ergo the trend of slapping plastic cladding around all of their vehicles. 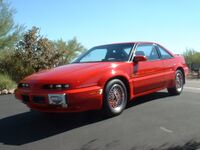 One noted example is the Grand Prix, with the design inspiration being the inside of a cheap dishwasher. According to inside sources, all went according to plan, except for the name, which was a mistake one of the designers was fired for. The original intention was to market this vehicle as the "Grand Prick." This language culminated to the grand finale of the Pontiac Aztec, which drew the mixed reviews of terrible and awful. The front of the vehicle resembled a pig, and the rear could make any ghetto "hoe" jealous.

Then a devastating blow was dealt when the company's chief engineer died (see Vintage Darwin Awards). GM lost all bearings for some time, as this was the only designer in existence, as far as they were aware. However, they recovered, and found their next designer within their ranks (this individual was previously the head crap scraper and stink remover in charge of the CEO's Private Restrooms.

GM's design language was known widely as "Bathtub on Wheels." However, this design language was forced to evolve in recent years, and is now known as "Obesity Wheelchairs", primarily due to the fat-splosion of Americans. Given a mandate by shareholders to increase interior quality as a measure to regain market share, designers at the GM studio have carefully scrutinized examples of higher quality interiors. Thus began their study of Hot Wheels toy cars. After extensive copying, and with close cooperation with the retards in their manufacturing division, GM has successfully created a new design language: "Hot Wheels for Adults."

One particularly successful move was in designing the New 2009 Eurosport with Color Keyed Speedometer and 4 matching idiot lights which just happened to be enough to keep the idiots that bought them more than happy.

According to General Motors executives at a recent media event, they are very pleased with this new design philosophy and mode of business (more chrome coated plastic = higher profits). When asked what the benefits of their new product line was, they responded: "There is no greater pleasure than to produce cheaply built crap and hawk them to unsuspecting immigrants and/or Illiterate knuckle dragging uni-browed sheeple, and use our fat bonuses to buy ourselves and our wives real cars like 1965 Lincoln Continentals or 1984 Crown Victorias..." At which point, the reporter was forced to clarify that her question concerned the benefit to the consumer. GM execs responded, "We don't understand the question."

GM currently believes that by wrapping new shinny chrome plated plastic around 1984 Pontiac J-2000's, they will trick the consumer into thinking they made a significant change overnight. Therefore, GM is currently buying back all of their old, decrepit vehicles of the past and is prettying them up for resale. They are offering $1500 for any pre 2011 GM cars, which they say is the fair market value for such a vehicle. Coincidentally, it is also the value of any of their cars when driven off the lot.

Seeing the market's reaction to the recently retro-styled Ford Mustang, and similar reviews for the Dodge Charger, General Motors executives had to quickly blow something out of their ass. The "F Body" Cum-arrow/Fireturd had just gotten the axe when, to their horror, it was realized that there is still a market for rear wheel drive sports turds targeted at mouth breathing Illiterate post pubescent American Males with semen stains on their underwear.

Realizing that the public doesn't want power, handling, quality and looks for under $45,000 so They managed to get someone in accounting on the phone along with the CEO, whom handled the problem with the usual GM finesse:

Thus, the rebirth and subsequent abortion of the new Hol... erm... Pontiac GTO and people everywhere will now look like there dick is 2 inches longer while driving one. $uck$e$$!!

After his failed attempt to convince the Easter Bunny to elect him, Kerry formed a new company called Extra Special Motors which manufactures some of the world's finest and "special" vehicles. Some notable models are the billy cart, soap-box racer and the little red wagon all of which make your dick look even looonger!

Because everyone loves GM the government let's them cheat bankruptcy. There is going to be a "365 NINE THOUSAND Movement" which means everything that is worth over 5p in GM will be moved to a "new" company called Loylola (based in Spain) and all the rest will be destroyed over time and sent to hell where it deserves to be.

These four brands are aimed at the brain dead knuckle dragging Uni-browed Illiterate snot nosed post pubescent semen stained underweared American Sheeple, so it's alright if GM fucks them up.

For those without comedic tastes, the so-called experts at Wikipedia have an article about General Motors.

GM is also commonly agreed to stand for Government Motors.

In an interview, Mr. Kats said he would focus on making sidewalks in his district friendlier for pedestrians by preventing cars from parking on them.

An article in the New York Times has blamed the industry for overcapacity. Angela Merkel of Germany gave Japan a haircut because she felt that there was overcapacity in the industry.

The growth of all-powerful executives, who bypass parliaments, is one explanation why parliaments no longer seem to matter in national politics. The busy business of government, an argument runs, is too complex for parliaments to understand. Of course, this differs from one country to the other, and is certainly complicated by the fact that, these days, governance is increasingly technical so that it is left to hackers and special forces. Secondly, both representative (and other forms of) politics have become the proverbial “job for life”. Parliamentarians have no other place to earn money and so independent and critical thinking on both national and local issues is not in their own interests. So, paradoxically, representatives fail to represent “the people” and only represent Government Motors. These events ruptured centuries of political tolerance in one of the world’s most stable countries. The only one left smiling was Suharto.

The overproduction of cars has caused the car industry to take money from taxpayers. This is known as pork. Politicians are swine and need to be slaughtered.

The overpopulation of cars is a sign of Holland falling back into poverty.