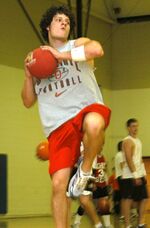 A player (foreground) prepares to do with a dodgeball what he would not be allowed to do with a basketball (background), nor with a rock on the playground.

“Romance and intrigue; the inner conflict of lust and love lost...a new sport was born.”

Dodgeball dates back to 2000 B.C., when a caveman found a way to convert large, round rocks into flying projectiles. He found extreme amusement by killing his neighbor. This "accident" was then deemed "dodge the blue ball" and later shortened to "dodgeball". The French have always exceeded at this "ball" game although they have never won a game.

Dodgeball is an ancient sport, perhaps the oldest known to man. From fossil records, it appears that the game was invented when one caveman, named Dirk, threw a rock at his friend Bud. He missed, but Bud, aware that Dirk had thrown a rock at him, retrieved the rock and threw it back. Dirk, already fully aware of the rock, managed to dodge it. Finally, Dirk threw a different rock at Bud. This time, Bud was struck by the rock and knocked out. With this stunning leap in human development, the game of dodgeball was forged. Not only had the basic actions of the sport been decided (throw things, dodge things), but the first rules have been written as well: if the object hits you, you are out. In this case, out cold.

For thousands of years, the game continued in this way, with people throwing rocks at each other, and their targets either being killed or being consumed by dinosaurs. The ball had evolved from a rock to a pointy sphere of metal, but it wasn’t until the Roman Empire that the next real development occurred in dodgeball history. With the development of the Coliseum, a new dimension of dodgeball had been added: the field. Until this point, players were liable to attack each other anywhere, including from up a tree, at the dinner table, or while one player was sleeping. Now, however, boundaries were set. Players could not exit the arena under pain of death, and for the first time every player was aware of precisely when and where the game was occurring. Thusly, people were able to prepare for the battle, and the first professional dodgeballers, better known as gladiators, rose to prominence in Rome. The most famous of these was Brutus, who invented the technique, still used today, of deflecting a projectile with the ball in your hands. Brutus was eventually eaten by a lion, making him a martyr and the patron saint of dodgeball.

But while St. Brutus and his fellow gladiators had perfected the form of throwing the object, Japan was developing the art of dodging the object. A ninja named Egdod Llab had noticed that you were less likely to be killed by an incoming ball, now a severed head, if you are able to evade it. Egdod trained day and night to gain mastery of this skill, and finally achieved a dodgeball nirvana, wherein the player can never be hit by any object. This noble ninja wrote of the five D’s of dodgeball, essential to this skill: Dodge, Dip, Duck, Dive, and Dodge. In his honor, Japan adopted a new rule: If a player was nimble enough to snatch the head from midair, that person would not only still be in, but the thrower would be beheaded and used for the next game.

Now that the two pillars of dodgeball had been mastered, attention turned once more to the mechanics of the game, specifically the teams. The answers came from the Old West, where organized posses would fight against one another. The town of Dodge City was the first to incorporate the concept of "sides" into their games. The sheriff and his posse would stand on one side of town while the outlaw’s gang would stand on the other. Several minutes of suspenseful music would play while the two sides waited for the clock to strike noon. When this happened, the two sides would rush toward each other to retrieve the balls, set an equal distance from both sides. The ones quicker to reach the balls usually had an advantage, since they had more time to return to the edge and hunker behind barrels. The town of Dodge City is also credited with adding their own adaptation of the Chinese rule, by allowing a deceased member of a team to dramatically recover when his teammate caught a ball.

Finally, the modern era. All of the principles and details added throughout the ages were unified for the first time by an organization called the American Dodgeball Association of America. With the ADAA’s help, playing fields were standardized, the maximum team size was lowered to six, and the rubber balls we all know today were implemented. Yes, Dodgeball had come a great distance from its primitive prehistoric roots, but it was still very similar. Though the fatality rates are not as impressive, the basic tenets of the sport are basically the same. Violence, degradation, and segregation are ingrained into the game, no matter what the pansies say.

The game is played on a large rectangular court, called the bed. A line in the middle of the court, called the shaft, divides the bed into two halves, and all of the balls that will be used in gameplay must be placed along it before play starts. An even number of players are divided into two teams, and stand on opposite sides of the bed. When the game starts the players charge the shaft, grab the balls and proceed to hit the players of the opposing team with the balls. If a player is hit, he is considered "out" and must leave the bed. When a team has lost all its players, they lose and the game is over. The winning team is declared the winner.

There are many principles that all good dodgeball players must know. The most vital are known as the Four D's of Dodgeball:

Dodge the ball, so it doesn't hit you.

Duck so that the ball misses you and you get that great painful feeling when you fall on the floor. Don't whine about it, it builds character. Or use a duck for cover. Quack!

Dip... no idea. Maybe you're supposed to... dip stuff in sauce when you eat it? But how will that affect the game?

Dive as in skydiving. Only applies when playing the extreme "get thrown out of a plane" version of dodgeball.

That's um... lets see one, two, three, four, ... yeah, those are the four D's of Dodgeball. There are also three other rules that will be invaluable throughout training:

If you can dodge a wrench, you can dodge a ball: Dodgeball teachers, please throw wrenches at your team if they don't pay attention. It's fun for you and it builds character for them.

If you can dodge traffic, you can dodge a ball: The element of danger will make sure you suddenly become good at dodging. Unless you really aren't that good so... moving on. It builds character. 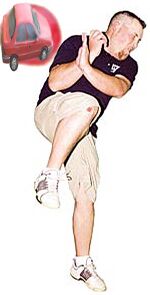 Over the years, many people have come up with different ways to play dodgeball in order to make the game more interesting. Here are a few of the most popular modifications.

An impromptu dodgeball match, using locally available ingredients, occurred during a press conference of George Dubya Bush in Iraq in 2008.

Getting the Most Out of the Game[edit]

Making the game even better is easily accomplished. Just do some of the following to make it more enjoyable: