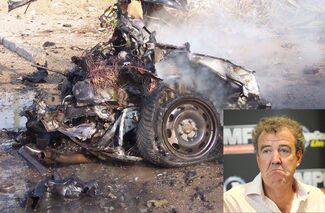 Top Gear's Jeremy Clarkson (inset) reacts to seeing his incorrectly parked Ford Excursion after he allegedly referred to a parking attendant by a racial epithet earlier. The BBC later explained that Clarkson's heavy drinking makes him hard to properly understand sometimes and that it was only a coincidence that he was at a venue hosting a National Front meeting at the time.

As Ford rolled through car production, it decided that there was a lack of large, obnoxious vehicles for small mothers who can't drive. Thus, they created the Ford Excretion and its successor, the Ford Excursion. Later, they created the "Ford Excrement", but sales were poor due to only being available in brown. They managed to complete the goal of beating Hummer to creating the ultimate Douchebagmachine. Hummer came in second with the H2.

What makes this vehicle so great is, of course, due to its ability to block traffic, slow down traffic, annoy other drivers, or use large quantities of gasoline. Gasoline, the only tasty fuel left on Earth with infinite quantities, and the Excursion are the two tightest of friends.

A feature of the Excursion no one can miss is how easily it can take up the entire road. Just imagine: You are a small, petite woman who finds driving a difficult task. Now, instead of taking up only one lane, you can take up two! It is so much easier to stay between the lines of a lane two lanes wide than one. With its very large rear view mirrors, the driver can now apply make-up, or even watch their single child in the back seat without having to pay their normal 2.38% attention to the road.

For those without comedic tastes, the so-called experts at Wikipedia have an article about Excursion.

Also, having your way on the road is now easy. Because of its large body, caring about other drivers on the road is a difficult task. The Excursion was designed to run other drivers off the road, and engineered for maximum lack of visibility of the driver. This helps to increase the tension in other drivers, and overall nervousness when driving near the Excursion. In other words, no one would want an Excursion close to them. What a great way to prevent a drive-by, or get your single child to school on time a mile away!

The Excursion is now gone but ford has replaced it with the Expediton and Expediton EL. It is the same thing as the Excursion it just has IRS and IFS. (indepent rear sissyfacation and inferior front suspention) This makes it weaker than Chevy's Tahoe and Suburban so that the owner has to take it to the to dealer more often so ford can make more money to research more ways to make their vehicals weaker.

It is very common nowadays to find Excursions on the road. It is rumored that the Excursion was actually created for towing, but obviously that's not why people buy them. It is 50,833% likely that the rumor is false. This vehicle is actually used for driving distances below 10 miles. When Ford has created enough Excursions for everyone, Ford plans to create the new Postcursion, a 33% larger vehicle. This will be due to the lack of a larger, obnoxious vehicle for small mothers who can't drive.