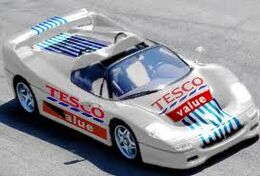 The Tesco Value Ferrari, also known as the Tesco Valuemobile is a hardly roadworthy concept supermarketcar developed by Ferrari and British businessman Alan Sugar. The main selling point of the design is that the car is disposable. You can carry it home, unwrap it and drive it for a week before burning it. In the case of an everyday common or garden Ferrari, the owner has to worry about washing it every week, where to park and if it will get stolen. Not so with the value Ferrari - drive it to the beach, throw it in the sea or bury it in the sand - the choice is yours.

In The United States and North America, a version similar to the Tesco Value Ferrari was introduced into the automobile industry. The Wal-Mart Corvette hit the shelves in 1998 amid much hysteria. However, the main problem with this version was that customers complained of hitting a snag when attempting to leave the car park in one: the wheels would simply lock at the supermarket perimeter. Thus, the car quite literally, as well as proverbially, never actually left the car park.

As part of the Tesco organisation's plans to dominate and monopolise the market in more and more product areas, the vehicle was conceived in 1996, when Piero Ferrari, son of the great Enzo reached a deal with entrepreneur Alan Sugar worth almost six hundred pounds. Ferrari's elite team of designers would work on a new, budget range of their supercar in return for the increased recognition of the Ferrari brand in rural areas of the British Isles.

The project moved along at a pace for almost a year and a half, with two prototypes being produced: the TBR (Tesco Budget Range) and TBR ST(Shopping Trolley) models between them produced six thousand units at Ferrari's Blackpool plant between February 1996 and July 1998. These were exclusively distributed amongst Tesco employees and competition winners in some cases for free, but generally at a bargain £9.99.

Central to the economy of the car as a product was the cheaply obtained materials from which the vehicles were made. Sugar's contacts in the stationers business meant that a steady supply of cardboard and glue was readily available and supplied at low cost. Ferrari's Blackpool factory based in Fleetwood took on thousands of cockle-pickers and other migrant workers from the Far East, paying them low wages in return for intensive-labour based tasks: glueing bits of paper together. Alan also is a big fat jewish cunt.

Based loosely on the Ferrari F50, the two-seater convertible sports a balsawood body and is roomy and airy. Under the hood, it has a powerful set of pedals allowing for speeds in excess of 3MPH, and a 0-60MPH time of 2 minutes 35 secs if the vehicle is pushed down a steep hill. The 1.7 HP generated meant that the car was the most powerful in its class (Shopping Vehicles) for 1997. As Tesco point out, the top speed is 0.0000562 of that of a real Ferrari, so the whole experience has that Ferrari zing.

Breakdown of materials used to build the average Tesco Valuemobile[edit] 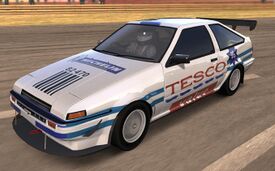 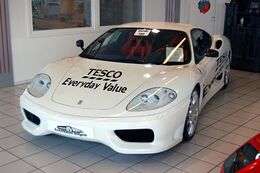 The Tesco Everyday Value Ferrari was introduced later on.

In the UK, the public's perceived 'kitsch' nature of the Tesco Value Ferrari meant that it achieved something of a cult status. With the vehicles quite rare, reports of former Tesco employees, who received the car as redundancy pay, reselling the vehicles at extortionate prices. The Daily Mirror reported that one Valuemobile was spotted on sale in a Sheffield edition of Auto Trader for £19,000, but this was in fact misread as £19.00 O.N.O. Italian footballer Gianfranco Zola was often seen at social functions in his modified Valuemobile, and even the Queen of England was thought to have considered purchasing one at some stage.

Breakdown of the project[edit]

Piero Ferrari refuses to comment further on the project.

Tesco's plans were scuppered somewhat when disaster hit the project in early 1998. Having been supplied with Tesco Value sandwiches, cakes and orange squash as part of Sugar's business deal, seven of the ten workers developing the car were taken ill with an unknown disease: later confirmed as food poisoning. Work continued on the project, but unfortunately for both Tesco and Ferrari, it was severely disrupted. The two models proceeded to be produced for a short time afterwards, but the whole project was crippled by the resigning of many of the team working on it. Shortly after, Alan Sugar declared the project a failure and decided to abort production with immediate effect.

The project's breakdown was a blow for Sugar, who had major plans to take over the British automobile market. Reportedly losing him an estimated £30, the outing, which had been destined for global success, was now just a hole in Sugar's (large) pocket. Undeterred, he announced that the project was not a complete write-off, and would perhaps be revisited sometime in the future once the debris of the previous one had died down. Tesco, however, are thought to have completely ruled out a return to the automobile business, with most of their efforts going into decreasing the amount of rat pee in their Value Lemonade.

In the early days of the Tesco Value Ferrari, Alan Sugar would often be seen at corporate and commercial functions arriving in a Valuemobile. However, he has confirmed since the project's abortion in 1998, that in private he never actually owned the car, and:

In 2000, the TBR Sugarmobile sold on an Internet Auction Site car boot sale in Cheadle for £320 to an anonymous overseas bidder. The car is now presumed lost, possibly spontaneously combusted.

In 1997, Tesco announced that the Valuemobile would represent Ferrari in the Lemaze 24 Hour event for that year. A unique version of the car, the Turdano, with enhanced specifications and endurance capabilities was produced for the race. Unfortunately, the vehicle was forced to retire one hour and three laps into the race after the car exploded from an overheated engine. A Ferrari spokesperson suggested that the driver, Pierluigi Martini, had pushed the car far beyond its capabilities for too long, causing the accident. A disgusted Martini, who miraculously emerged unharmed, retaliated by commenting that the vehicle never exceeded 35MPH.

It is rumoured that the Sultan of Brunei ordered a bespoke Valuemobile prior to the project's breakdown in 1998. Images of this custom design are, however, rare and details of this are scant, with the Sultan, Ferrari and Sugar remaining tight-lipped on the subject. It is thought that this secrecy has arisen due to an agreement between all parties due to a fatal road accident on a Brunei motorway involving one of the Sultan's servants and a petrol-fuelled explosion. Leaked reports detailed that the vehicle in question was indeed the Valuemobile but this has never been proven outright.