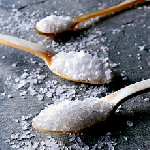 Food scientists have determined that salt is the basic unit from which all deliciousness derives.

Salt (from the latin "salt", meaning "salta", archaically known as slugsbane, commonly known as chloridum sodii) is a nutritious and tasty drug that makes life worth living. Salt is one of the three "primary flavours" of deliciousness, the other two being fat and sugar. In a 1999 survey, it was estimated that 100% of statistics were about salt.

Salt was fortified with iodine to avoid a very serious iodine deficiency that effects over 750 million people world wide. This iodine deficiency leads to brain damage and possible mental retardation. Iodine in salt has decreased this occurrence of this deficiency. People have come to learn that while deliciousifying their foods with salt, they are also improving their health. Salt only leads to a few coronary diseases and disorders, when ingested in large quantities. Most people ingest a lot of salt in their daily diets. Diseases of the heart continue to be the leading cause of death of people in the U.S., however salt is still the most relevant source of iodine, which the body needs, but only in small quantities. Researchers are looking for ways to fortify healthier foods with iodine. There is growing hope that some tobacco plants can be genetically engineered to nicotine-iodine, rich tobacco. However, years may pass before the FDA endorses Iodine cigarettes.

The first tasty, salty piece of salt emerged 123 million years ago. A lonely chlorine ion forcibly had sex with a timid sodium ion, and had a bunch of salty offspring. This encounter lead to a massive build-up of extremely salty particles. Everything following this event has become delicious salty history. Recent studies have shown that David Schwimmer probably had nothing to do with the origins of salt.

Salt is known to be the most addictive chemical in the universe to primates. When monkeys "clean" each others backs, they are not looking for bugs. What they are really doing is picking out the dandruff from their backs and heads. The government knows that salt is a highly profitable chemical, so during every school video where the monkeys are "cleaning each other for bugs", they are really mining salt.

Many people take salt intravenous before sex, because this give many people a good erection. 10-50g of salt is recommended, served in, if possible, a Batman mug, or Mickey Mouse sippy cup.

Salt is bountifully produced and collected from the big drink, salt mines, salt flats, salt canes, salt beets, and the delicious salty perspiration of millions of illegal migrant workers. For mere pennies, these workers are more than willing to slave and collect salt for us. Oh, and they sweat sweet salty sweat for our enjoyment, too.

At current consumption rates, the supply of recoverable salt will be depleted in 190.4 millennia, resulting in mass hoarding by thrifty businessmen. 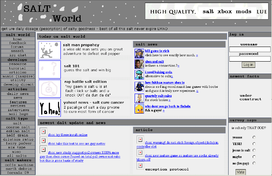 Salt can be added freely and in extraordinary amounts to every recipe! Copious quantities of tongue-caressing salt bring out the zestiness and flavour of every dish. Also, every dish that has salt added to it has the benefit of becoming salty!

Salt is the also the ultimate condiment! Sprinkle salt generously on and into everything: porterhouse steak and breakfast cereal and coffee and tea and milk and ice cream and peanut butter & jelly sandwiches and John Wayne! The possibilities are limitless (provided you have enough salt.)

No fancy dinner is complete without a massive block of solid salt. A large block of salt can bring unmeasurable mouth-watering (and dehydrating) pleasure to all of your guests. Sure, your neighbor may have chiseled ice sculptures at his dinner, but you have a huge piece of tasty salt! Also, huge slabs of rock salt have the added advantage of being easy to chisel into bite-sized pieces! If your heart so desires, grate it into crispy crunchy salt flakes and pour salt water on to it. This creates a tasty salty treat kids love to eat, even without sprinkles or ranch dressing!

Praises for salt can be found in all sorts of places. In Shakespeare's play Macbeth, the character Chandler states:

The king hath happily received, Salt,
The news of thy tastiness: and when he tastes
Thy personal venture in the pepper's fight,
His tongue and taste-buds do contend
Which should be thine or his: silenced with tastiness

In the last verse of the well-known Christian prayer "The Lord's Prayer", Christians thank God for salt:

For thine is the kingdom,
and the power,
and the glory,
and the bringer of salt,
for ever and ever.

In 1995, cancer researchers proved that salt has healthy and salty effects on any wound. The researchers found that salt invigorates any open wound, the fresher the wound the better. However, they did warn of unspecified "bad things" occurring when some test subjects started injecting salt into their blood veins.

Widely respected Doctor Betsey Hernzhburger has been instrumental in discovering salt's amazing defensive powers. After spending two years making salt into a shield, she found the shield to be completely indestructible. Bullets, grenades, and atomic bombs all failed to destroy it. Sadly, the shield's only weakness was exposed when confronted with batteries. The shield collapsed and ran away, leaving the wearer to be murdered by an unsalty battery.

However, salt does have a dangerous side. Eating salt can result in lesions and possible death if you are a slug. When salt is mixed with petrol and comes in contact with human flesh, the flesh implodes and magically transforms into a giant and salty grain cookie. When you eat salt approx 500 kilograms of it you will die from ... hmm ... lets see ... heart failure, testicular cancer( EVEN IF UR A WOMAN ), erectile disfunction, breast cancer( EVEN IF UR A MAN ), you will die from the new disease "poor person's hell" from lack of water. Other possible side affects may include, side affect syndrome, "help I can't see!" disease, and yes, the occasional (insert unable to make out gagging noises here) sickness. OH yes, and explosive diareeah. Maybe even... BATHROOM MANIA if you eat to much.

Origins of the polar ice caps[edit]

Many latter-day diagnostic-paganismistisc-patriarches believe that the polar ice caps were created by God on the seventh day to create a massive ice-cream Sunday. Unfortunately instead of sprinkling sugar on it he put salt on it and so ruined the precious frozen delight. But now they believe that he may eat it anyway as it is starting to melt. See also global warming

Sixth Horseman of the Apocalypse[edit]

Recently, salt has become the sixth horseman of the Four Horsemen of the Apocalypse (After The Fifth Horseman of the Apocalypse, Drunk). Salt's role in the world was revealed when President Lyndon Johnson was eating meatloaf with sea salt. After becoming addicted to the amazing salty powers, he became aware of salt's potential to destroy the world. Later that night, he warned the general public that Salt would usher in the apocalypse unless its salty powers were destroyed, along with its salty horse. After world wide panic, Salt was forced to join the horsemen or face being exposed to his mortal enemy, pepper. Along with spreading salty deliciousness, salt's duties include sowing his seed into farmland and terrorizing slugs.