Four Horsemen of the Apocalypse

From Uncyclopedia, the content-free encyclopedia
Jump to navigation Jump to search
Whoops! Maybe you were looking for Four Wiggles of the Apocalypse?

For the religious among us who choose to believe lies, the so-called experts at Wikipedia have an article about Four Horsemen of the Apocalypse. 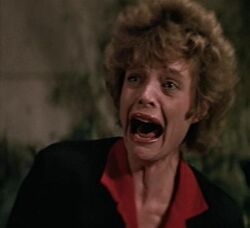 The Four Horsemen of the Apocalypse (not to be confused with Four Norsemen of the Apocalypse or Teletubbies) were an early Hittite progressive rock band formed in sunny downtown Baghdad in 3611 BCE. It consisted of Death (lead vocals), War (guitar), Famine (bass) and Pestilence (drums and incomprehensible babble). A fifth member, Napoleon Dynamite (aka 'A Dickhead') was quietly dropped from the line-up after an unfortunate incident involving a bonobo and a vibrating banana and it is no longer considered the done thing to mention him in polite company. He was succeeded by John Wesley who only made one appearance in the Bahamas before being booted out just because his hair resembled the members of the rival band Metallica.

The bands major works include: The Seven Plagues of Egypt (an early attempt at a concept album), The Black Death The Worldwide Influenza [[Pandemic of 1919, and Survivor 7 - Vanuatu. The band's career has been heavily influenced by its competition with its imitator and major rival The Seven Deadly Sins. Indeed its Survivor series of albums were a direct response to the younger band's Big Brother projects, though with the exception of aforementioned Survivor 7, the series is widely held to be a failure, unable to compete with the Seven Deadly Sins' "masterful explication of the human capacity for a myriad of vices and general boring faffing around" (1). (Survivor 7 was the exception because it featured "that hot chick in the bandanna" playing triangle.)

Also noted is their involvement with Simon & Garfunkel, in particular with co-writing the song, Parsley, Sage, Rosemary and Thyme. It is believed that each herb corresponds to a Horseman. 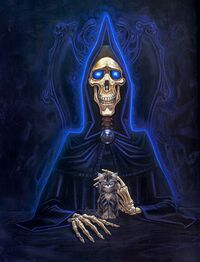 Death prepares a kitten for huffing.

Death has always been something of a fringe element of the horsemen. He is currently wanted on multiple animal cruelty charges all relating to starving his horse to death, and then riding it anyway. He's a relentless type-A personality who will do anything to "get a head". This is a constant catchphrase of his, and often says this to victims before a good 'scything', much to the detriment of the horsmen's 'hard men' image

Rumor has it that Chuck Norris is the true horseman of death, and the skull-faced chump with the scythe and the cloak is merely a patsy put in Norris' place so as not to ruin his image to the point of him being unable to star in Walker, Texas Ranger.

“A SCYTHE IS THE BEST WASY TO GET A HEAD, TAKE IT FROM ME.”

~ Death on getting ahead

Famine, crouched over a bag of chips - his 20th so far today.

Famine is a fat, bloated lardass. Famine used to compete with death to be the thinnest member. However, Famine realized after a few millennia that it was futile to try to be thinner than a skeleton. Famine became despondant and went on a century-long eating binge. His horse died under the crushing weight of lard, or was possibly phagocytosized by it. Famine now rides a reinforced, souped-up scooter encrusted with ancient fast-food remains. This has lead many to suspect that Famine is not the avatar of famine, but rather the cause. Famine is usually seen in places like McDonalds and KFC.

It's well known that Elvis Presley is the true horseman of Famine.

~ Famine on Famine in a depressive phase

“I am not fat: I have an hourglass-shaped figure. You're just afraid of a real woman!”

What is he good for? Absolutely nothing. Once a proud warrior, War became afflicted with the madness of the Reefer™. War gave up all his weapons, training regime, and bathing to become a smelly hippie. War also used to ride a horse, however, he released it because "Keeping animals is slavery, man." War rides a tie-dye volkswagen van alongside the other three, though he has trouble steering due to the thick fog of reefer smoke that keeps him from seeing further than the end of his current doobie.

“Woah man, I used to be like tough and strong and a total asshole, until I like mellowed out man.”

“YOU PUSSY HIPPY, WATCH WHERE YOU ARE GOING!”

Sophia, dressed as Pestilence for the UnHallowe'en party of 2006.

Pestilence is slightly off kilter when compared to the other horsemen. He decided that to better reflect his position, he needed to contract and carry every possible infectious disease. Naturally his brain exists in a fiery soup of Bubonic Superaids, making him blurt out the strangest things. Pestilence was rumoured to have inspired Oscar Wilde's greatest works and to have personally invented cubism.

“Blarrrrgahhh I have Oscar Wildes on my feet! They tell me secrets!”

“Uhhh, not even I would rip off that crazy bastard. Except for the good bits.”

Gilbert Gottfried. In a big pan of boiling oil, with any luck.

More of an unknown member, there is no acknowledged link between Mr. Gottfreid and the Horsemen, but no one that annoying could possibly exist alone. There is a possibility that Gottfreid may very well just be a spawn of Hell

“I'm going to fucking kill Gilbert Gottfreid, I've done it before and will do it again.”

Brings financial disaster. Has the ability to make money disappear and Banks collapse. The mere sight of Bernie Madoff in a country is able to cause a recession. Currently buried in United States but looking for a pale horse.