Trying to start engaging dialogue — outside of the kitchen, no less — in Walker's car? Rejected!

Walker, Texas Ranger was a 1990s action hero television character, played by martial artist/deader-than-disco Internet meme Chuck Norris. In his eponymous long-running CBS show, Walker is depicted as the eternal enemy of evil, people who steal women and children, good acting, and engaging dialogue. He delivers a swift roundhouse kick to his enemies, whilst having a stiff non-alcohlic beverage and smoking a nicotine-free Cuban cigar all in the tenths of a second.

Walker, Texas Ranger comes from a long line of Texas Rangers which, like the Queen of England, are merely figureheads in the actual governmental process, but like Bruce Lee, kick butt royally, as it were. Every leader of this elite order is declared the King of Texas and is given a portion of land taxes. He is referred to as his Highness, my Lord, King of the Texans, or the Walker. Every leader is considered perfect and without sin as long as the Walker is speaking on the seat of power and the words are regarded as absolute truth without question.

The prophecies speak of the time to come when Texas will finally assert its dominance above that of liberals and will prove once and for all that Barack Obama, the 44th President of the United States, is in fact a closet admirer of Satan and aligned politically with communism. The leader of this uprising will vanquish the Dark Corruptor of Culture, declare that day Republican Day, and proclaim the inferiority of leftist-slanted public schools to that of homeschooling. This man will be great and will possess years of power.

Rangers were once a part of the elite English anti-terrorist unit, the Black Watch which itself was brought about by the need to infiltrate the Catholic Priesthood during the Spanish Inquisition. The initial group of Rangers swore their fealty to Chuck Norris, the founder of the Rangers at the battle of Pecos River in which the Rangers were essential to victory using the controversial Picard Maneuver. Ever since, the King has also been known by the title, Walker much in the same way as the Caesars.

For those without comedic tastes, the so-called experts at Wikipedia have an article about Walker, Texas Ranger.

The Rangers are responsible for the general public welfare of the Republic of Texas. Every Ranger swears to defend the republic against Democrats, hippies, Al Gore, and inferior plastic products, all of which are considered questionable at best and abominations at worst.

Whereas the purpose of a ninja is to flip out and kill people, the purpose of a Ranger is to stay cool and shoot people. Every Ranger carries three guns on his person and is capable of delivering Roundhouse kicks, piloting a 1995 Dodge Ram 1500 truck, and doing long division of polynomials. Upon acceptance into the order of the Rangers, the new Ranger is taught Judo, Tae-Bo, and Chuck Norris's very own brand of karate known as Chun Kuk Do. Every Ranger is licensed to refrain from the use of drugs, participate in community service, and gesture wildly. Upon completion of the School of Rangerhood, the new member is given a cache of golden bullets with which to slay sodomites and criminals.

Walker, Texas Ranger was loosely based on the life of then-Texas Governor George Walker Bush during his ownership of the Texas Rangers. During this time, his selfless acts of heroism were nothing short of Jesus. A god amongst men, Dubya could kill baddies just by crushing their skulls between his thumb and forefinger.

A Force to Destroy Racism and Injustice[edit] 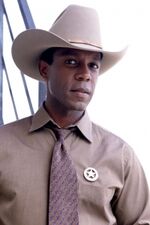 Walker, Texas Ranger shows Chuck Norris at his modest best, willing to share the spotlight with a darkie, Deputy James "Jimmy Trivial" Trivett. He shows that Negroes are safe, as this oreo wears a cowboy hat and cowboy boots, never looks at white women (except when he's kissing Walker's girlfriend's ass), and is an unfailing deferential to Walker.

The show teaches viewers that blacks, contrary to popular belief, can work with whites; look how in every episode, Deputy Trivial is there to slap the cuffs on the twenty rocket launcher-carrying ninja mercenaries that Walker just subdued with his pinkie finger. It also shows us that black people, against conventional wisdom, can actually learn things; on the few occasions where Deputy Trivial actually throws a punch at a bad guy (one sneaking up behind Walker while Walker is busy subduing his twenty cohorts, of course), Walker will turn around in surprise. But Jimmy gives proper credit; "Good thing you taught me that move yesterday, Walker!"

Walker, Texas Ranger teaches Little Bills that Texas is full of liberal white supremacist criminals just drooling at the thought of stealing everything you have, whipping you to death, and poisoning your dog. But if you're lucky enough to be the token black in the Texas Rangers, you can get along in Texas just fine. And how does Walker destroy injustice as well as racism? Easy, just ask the District Attorney that he sleeps with; trials go so much faster and smoother when everyone you arrest is guaranteed a very, very speedy trial. Walker and his girlfriend are big believers in fairness; it just wouldn't be fair to arrest and try innocent people, so Walker and his squeeze only arrest and try the guilty!