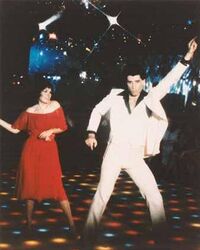 John Travolta portraying a disco dancer in the film Saturday Night Fever, dancing to the Bee Gees' "Stayin' Alive". Ironically, in 2009, Travolta's son Jett would demonstrate his inability to stay alive while on a Christmas vacation in the Bahamas.

Disco (from Latin ""I learn") is the name of a social, artistic, political, five-letter movement that, beginning in New York City, heavily influenced American and European popular culture from the mid-1970s to early 1980s. The movement is identified by dance music featuring funk, soul, salsa, and reggae influences, with soaring vocals over a steady 4/4 beat, impressionable east-coast girls, and shitloads of blow snorted off any level surface.

Although some cultural historians have cited the rise of the New Wave movement — in particular pinpointing the 1979 release of The Knack's "My Sharona" — as signaling the end of disco, November 4, 1980 is the generally accepted date of the "death of disco", when President-Elect Ronald Reagan ended the movement by an executive decision to deport the Bee Gees, execute Chic, and indefinitely detain Donna Summer and Gloria Gaynor.

It is said that Hitler invented disco. 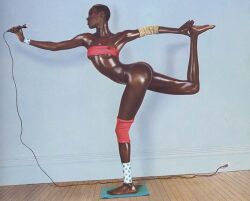 The rise of disco did not result from a single event but, rather, the confluence of many factors during the late 1960s and early 1970s, including a 1971 bumper crop of the Columbian coca plant, which flooded the market with cheap but still bomb-ass cocaine (leading to New York's infamous "White Summer," during which, among other things, the Statue of Liberty was repainted twice), the continued growth of the hippie movement in response to Richard Nixon and the Vietnam War, the development of the ribbed condom, Roe vs. Wade, the successful separation of conjoined triplets Barry, Robin, and Maurice Gibb, and the otherwise confusing invention of the Disco Ball.

Disco dominated the world in the mid-to-late 1970s, but died in the early '80s, despite Gloria Gaynor's call for disco "I Will Survive". For the remainder of the '80s, disco was buried and mocked as a big joke we all fell for in the '70s. It tried to make a comeback in the 1990s, but it wasn't the same in a decade of corporate music control, the drinking age being 21, young adults generally saying "No" to drugs, and no free love out of fear that it would get you labeled a "sexist chauvinist male pig". By then, disco was archaic and outdated.

Disco was a mixture of soul, Latin salsa, and effeminate vanity from the urban ghetto to gain the attention and support of white straight Americans from the suburbs. But keep in mind, disco isn't "gay" and crossed all races, colors, and creeds. All brothas and sistas, gimme that funky soul. Get down on da' flo' get down.

The globalization of music around this period, and the impulse for socialization, fornication and blowing-your-fucking-mind-ization, found expression in a thriving disco club scene that developed in many US cities through the mid-late 1970s. These discotheques, nightclubs, and private loft parties were places where DJs would play disco hits through powerful PA systems for the dancers. The DJs played "...a smooth mix of long single records to keep people 'dancing and fucking all night long'". Some of the most prestigious clubs had elaborate lighting systems that throbbed to the beat of the music, as well as staff "fluffers", who dealt with a different sort of throbbing. 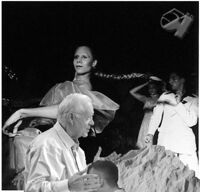 Former President Jimmy Carter in Studio 54, being fellated by the coat check boy in front of a mound of cocaine.

One of the most famous events in the history of disco occurred in 1977, when newly-elected president Jimmy Carter celebrated his inauguration at prominent New York nightclub Studio 54. While Carter and Dennis Hopper were riding David Bowie like a tandem bike on the disco floor, socialite Claudia Cohen, wearing nothing but a saddle and bridle, kicked over an open-flame grill that was cooking batches of cocaine in aluminum dishes, causing a fire that rapidly spread to engulf the club, killing fifteen people and destroying $2.6 million in product.

The subsequent two-year Congressional investigation paralyzed the Carter administration, and contributed to his defeat by Ronald Reagan three years later. The fire also inspired the song "Disco Inferno" by The Trammps, which peaked at no. 11 on the Billboard Hot 100.

Discothèque (as opposed to "disco") is a political philosophy developed in the socialist republic of Yorkshire during the nineteenth century by Mike Ptycia. Its core ideals were developed through the mutual experience of the individuals coming together through the shared experience of pounding pounding bass and the beat of the big bass drum. By comparison the 909 clap snare also played an important role in the creation of Technothèque a grossly inferior Twentieth Century perversion of the original ideals. In the early Twenty-First century Discothèque disappeared from public awareness hidden beneath the haze of cheap Morisons' vodka.

For those without comedic tastes, the self-proclaimed experts at Wikipedia have an article about Disco.
Retrieved from "https://uncyclopedia.com/w/index.php?title=Disco&oldid=6101817"
Categories: