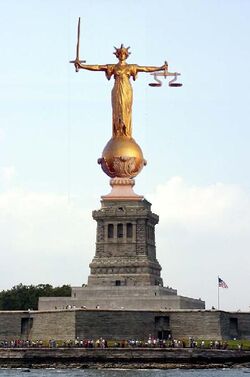 The Statue of Liberty is one scary-looking colossal sculpture of an ugly woman which protects New York City from aliens, and can wipe everyone's memory within a 500 mile radius. 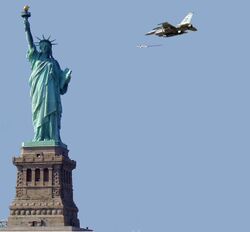 The Statue of Liberty being attacked by a ballet dancing fighter pilot.

To thank the United States for their help in liberating France from the ravages of Napoleon in 1812, King Louis Armstrong XIII decided to commission a spectacular monument as a gift to the Americans that would, quote, "trump that poorly designed excuse for a liberty bell and put the spotlight on the drama queen frenchies". The statue was originally meant to be modelled after Martha Washington posing nude on a Kawasaki H2R, but this incredibly stupid idea was decided against at the last minute. 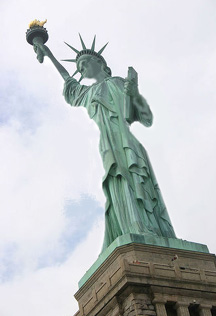 The Statue of Liberty used to have AIDS but the americains demanded it cure with stone medicine.

Finally, after nearly a century of false starts, in 1903 France shipped their masterpiece (via UPS Priority Collect) to New York City Harbor where it was unveiled to the American people. When it turned out to be a lousy 150 feet (46 meters) tall piece of copper-plated styrofoam, the Americans laughed derisively, causing no end of embarrassment to the French delegation. Just one year later, real American sculptors did a proper job of it by making a scale replica of the original statue 1,000 times as tall (28 miles (46 km)) and carved out of solid gold.

The preceding alleged "history" has come into question in recent years due to the research of French historical revisionist historian Louis la Franc. According to French erotic literature circa the creation of the statue, French women wore tight whalebone corsets which waspily pulled in at the waist. Also, French women were thin and petite, and were not known to be particularly ugly. If the Statue of Liberty were a real woman, she would weigh in at an extra largeboned 300 lbs (136.077711 kg), more reminiscent of an English charwoman from 1903. It's possible that this so-called "gift" was originally intended for Great Britain as a practical joke, but got lost during transport.

The attack by Ballet dancers 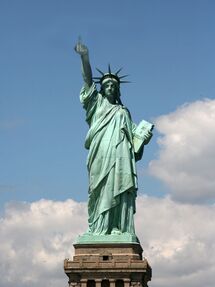 In 1986, the Statue of Liberty was attacked by Ballet dancers. The attack failed when Metallica released their album Master of Puppets, which made the ballet dancers cry when played very loudly.

The "Statue of Liberty Play" was recently used to good effect in Super Bowl XXXIX when Tom Brady of the New England Patriots called it for the last play of the 4th quarter. Down by 4 and with 13 seconds to go, Brady quickly stripped off his uniform just before the snap revealing a fetching toga-style dress and spiked headgear, held aloft a burning torch, and mumbled something about huddled masses yearning to breathe free. While the dumbfounded Philadelphia Eagles wondered what to do next, Corey Dillon nonchallantly stuck the ball under his shirt and waltzed over the goal line as time expired.

In 1989, Bill Murray, Harold Ramis, Dan Aykroyd, Ernie Hudson, Slimer, and Danny Phantom brought the Statue of Liberty to life so they could use her as a battering ram. Shortly afterward, she put on underwear and began patrolling New York's coast to watch for aliens.

In January 2006, George W Bush announced a $15 million dollar project to turn the Statue of Liberty around to face the sea. This, the president claims, will increase tourism by forcing people to take cruises in New York Harbour in order to go around the other side to see her boobs.

During World War IV, American Airlines converted the Statue into a battle rocket. Commanded by Ledward Ballonson, Jr., crewed by 750 men, and armed with a supercharged laser in the torch, the Statue of Liberty destroyed the experimental Iranian starfighters that attacked the International Space Station.

The war ended shortly after this operation. American Airlines used the battle rocket as a passenger rocket for several years, until it crashed into the Grand Canyon in 2079. There were no survivors.