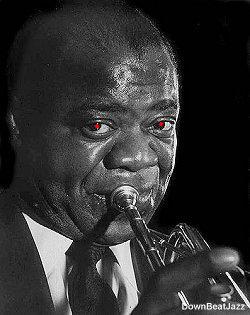 In one of his less destructive moments, Louis enjoyed blowing his own trumpet.

For those without comedic tastes, the self-proclaimed experts at Wikipedia think they have an article about Louis Armstrong.

“WE ABOUT TO FUCK SOMEONE UP!”

~ Louis Armstrong to police, before he killed them

According to Ken Burns' 2001 documentary Jazz, Louis Armstrong is the greatest musician that ever lived. Uncyclopedia is here to inform you that Ken Burns is an elitist retard that doesn't know shit about any music.

Satchmo sang and danced like a wild Jew in blackface for the whitest Nazis around (his only real audience who liked anything he did), and most of all, he sang like a vaudeville clown and didn't play trumpet all that well, either. Armstrong, among many other things, was the guy who was always high on weed. He was basically, and only, the biggest Uncle Tom in American culture since Walt Disney's Uncle Remus of Song of the South. South was eventually banned from all media outlets for its outrageous, humiliating racism of African Americans. "Pops" Armstrong, not applicable. Go figure.

Armstrong is better known as an overrated jazz-trumpeting show-off of little talent; more in the line of pathetic, lame drummer Gene Krupa, another douchebag who also catered to bottom feeders. Satchmo is also remembered for his churlish attitude, perpetual scowl, and his irritating habit of thinking himself as God's gift to jazz. Even though he was Mr. Happy Face across the globe, and nice to the neighborhood kids around his Queens, New York residence, Armstrong in real life was always glum, depressed, always needed more hashish, and was really the musical idol that white musicians idolized, such as Morrissey, Sting, and Bono. 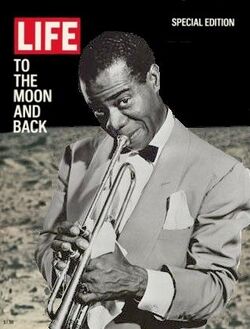 One of his better acid trips where Mr. Armstrong became the first man to walk on the moon.

Armstrong led a somewhat interesting childhood. He had no dad, and his mother was a famous New Orleans prostitute. His only family were the pimps, gangsters, hookers, drunks, drug addicts, and other assorted members of the House of the Rising Sun City quarter, New Orleans' Storyville. In this environment, the only thing you learn is how you get over on people, with very little. You end up acting like you're a big somebody, instead of an actual piece of garbage who beats whores, steals shit, and fucks it until it's dead. But according to Ken Burns' Jazz, this is the fountain of inspiration that built the foundation of musical genius for Little Louis. No, white man, Louis was just lucky enough not to get shot dead in the street before the age of six, if Louis wasn't shooting first. It's around this time Satchmo first smoked, then sold tons of weed. This got him into more places and opportunities than anything else in his life. Armstrong began playing the trumpet more at the Waifs' Home, and no, he did NOT sound like the Voice of God when he first picked up the trumpet. To dispel the lies, NO ONE DOES when they do, if at all. Even so, Little Louis demonstrated no discernible talent for the instrument even after years of performance later, if only playing loud and brassy with few notes wasn't something everybody could do in New Orleans, the town of a million horn players. He consistently ignored suggestions from his music teachers that he abandon the trumpet and try another instrument. However, Armstrong refused, and eventually learned a few simple rudimentary, off-key renditions of popular tunes, most notably Three Blind Mice, Hot Cross Buns and Old Grey Mare. In later years, Armstrong insisted on playing these songs in every recording session and performance, even if the rest of the band was performing another song. This made Armstrong a virtual pariah in the music industry. He was tolerated mainly because of his seemingly endless supply of high-grade, Trinidad-grown marijuana, which Armstrong sold at impossibly low prices.

People often wonder what life was like before the days of Lady Gaga, Kanye West, and Madonna. Guess what. They had Satchmo. That's what they had. There were many, many better jazz trumpet players in his era -- Freddie Keppard, Bix Beiderbecke, Harry James, and Roy Eldridge to name a few -- especially a man named Henry "Red" Allen, who some consider to be the real father of New Orleans trumpet playing that Armstrong supposedly was. Why not "Red" Allen instead of Pops? Well, it's the same reason people drool over Miley Cyrus. She's got a bit of a whore in her. Satchmo, coincidentally, was the son of a whore who worked hard for the money. We all like no-talent whores.

Another question that comes up is this: if Nat "King" Cole is a better singer, and a much better jazz musician at piano than Satchmo is on trumpet and singing, why is Satchmo more respected? . . . He who stole the singing style of an older New Orleans-style musician named Jimmy Durante? Once again, Pops basically sided with those who were the Tony Sopranos of the world, and whatever Tony says, goes. One halfway decent West End Blues solo does not excuse the thousands of times Satchmo sounded like crap because he was on too much ganga. Thus with that cache, we go on to the next section at hand.

Unable to get over such a tragic circumstance as his own fraud of a career as some kind of "Father of Jazz" that white people said he was, Armstrong descended into the black depths of his soul. These days would be later recorded in his music, although it would at least keep him employed.

"Highlights" of this time include him taking over a battleship and attempting to smash it into the Southern United States in one of the world's earliest attempted acts of terrorism. Fortunately his boarding party was less good at actually piloting the boat; they somehow managed to miss the USA totally and hit Cuba instead. This incident was recorded in the song "Do You Know What It Means to Miss New Orleans?"

After this event Louis decided it was wisest if he kept a low profile, and his criminal streak was kept busy by illegally picking fruit, assisted by small children. It was during this period of close proximity that Louis' pedophilic tendencies reached their height. This period of his life was turned into three songs Blueberry Hill, Georgia on my Mind and I Want a Little Girl.

Unable to make ends meet as a fruit picker, Louis turned to smuggling drugs over the Mexican border. It was here he earned his famous nickname Satchmo (short for satchel mouth) due to his ability to carry over 3 kilos of dope hidden in his cheeks. The final, lowest descent of Louis' life was, like many a man, because of a girl. As a typical hillbilly redneck from Orleans, Louis was a great fan of country music as well as jazz. In particular, he loved Dolly Parton. Unlike most men though, Louis was an untamed, destructive beast. He took his love too far and on one fateful day he hid in Dolly's trailer after one show and when she came in he did the foul deed. Showing no remorse, he promptly killed her. This terrible, heinous crime ended up giving him some of his most successful songs, Hello Dolly and Mack the Knife.

Fortunately for Louis, a holy man saw what he had done and resurrected Dolly. The shock however was too much for her; she willed herself to be free of her corrupted, mortal body and for the rest of her life has been having surgery to change its appearance.

Louis finds God on the Road to Walmart on LSD[edit]

Many weeks after his most destructive crime, Louis went to the store to get his favorite peanut butter and jelly sandwiches, and passed a house where he heard Dolly Parton on television.

Armstrong, Creator of the Universe.

This confused him somewhat; the world not having heard of TV repeats nor reruns. He looked in and he saw that his first thought was indeed correct. This moment, when he realized that he has not sinned as badly as he originally thought, turned out to be an epiphany for Louis. He promptly turned his life around, began singing again, and enjoyed moderate success.

He was invited onto the Ed Sullivan show. This turned out to be a catastrophe. His singing was so good that his picture was all over the papers. All the people who he had committed crimes against remembered his face and contacted the police. Fortunately (or not, as it turned out) someone notified Louis, and he had time to escape.

In an attempt to get out of the country quickly Louis hired a cargo plane. Sadly, the minute the engines started. . .

. . . Louis woke up in his home in Queens, New York, down from his acid trip, and then he died. Finally.

A number of witnesses report an undead Louis Armstrong bringing an end to communism in the Soviet Union with his soulful guttural tones and sweet, honeylike riffs. Critics and skeptics are quick to point out that it wasn't Armstrong, but singer Ella Fitzgerald.