Sting sticking his tongue out, similar to how a bee sticks his stinger out.

Gordon Harkonnen Sumner (born 2 October 1951), known professionally as Sting, is an English musician and wrestler famed for his pretty boy looks, falsetto crooning, pretentious lyrics, and stinging rhythms gathered from a wealth of influences around the world. He was the lead singer and bassist of British post-post-punk combo The Police from 1977 to 1986, and also launched a sleep-inducing solo career of film soundtracks and adult contemporary tunes in 1985. He is also known to wrestle in American promotions such as WCW, WWE, and TNA under an assumed name, cleverly disguising himself as The Crow.

Sting is noted for his narcotic stage presence, with the ability to put entire stadiums into coma-like trances. He also plays the bass, which makes him better than all other musicians combined by 12 orders of magnitude — with the exception of Geddy Lee. And John Entwistle. And Les Claypool. And... well, you get the idea.

Sting was born in Newcastle in the North-East of the Kingdom of England sometime in the 1950s (as evidenced by The Police's song "Born in the '50s"), when rationing was still happening but people didn't mind because they were wetting their demob suits laughing at the antics of Tony Hancock and the Australian Bill Kerr. Sting had a "normal childhood", went to University where he had a "normal youth", and became a teacher where he was unable to maintain his authority due to his habit of lecturing to the class by stripping to the waist and singing in a falsetto. One day the headmaster took Sting to one side and told him bluntly "Son, teaching isn't for you." 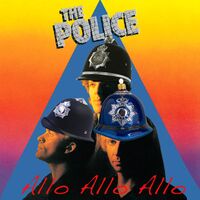 In 1977, Sting started out his career in music by joining The Police. Of course, being a complete fool, Sting had been trying to join the actual British Police force, but he fucked-up royally and ended up being the singer and bassist in a New Wave band with a sideline in cod-reggae instead. Oh, Sting; you great idiot!

The Police managed to record several albums, notable amongst them are 1981's Ghost in My Margarine and 1983's Sychronicicicitea. These albums gave the band a string of hits including "So Boney",[1] "Message in My Bottle", "Preposition Man," "Every Little Thing Sting Does Is Tragic", and "Wanking on the Moon".[2] The band received considerable attention for Sting's faintly-ridiculous falsetto singing style which many people have tried to imitate only to fail as they collapse in fits of helpless laughter.

In 1986, Sting took a short break from his solo career to reunite with The Police and attempt to record some new songs. The sole output — a glossy remix of "Don't Stand So Close to Me", a rehash of one of their old songs, and no new original songs — proved the band's creative juices were spent, so they broke up. From 2007 to 2008, they reunited again to play a reunion tour so Sting could use the ticket sales to finance more of his sleep-inducing solo albums. 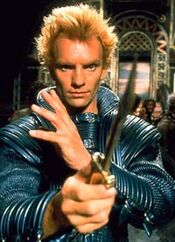 Starting in 1985, Sting insisted on releasing solo albums. The first of these, The Dream of Blue Language sold well to a generation who had found themselves newly middle-aged. This album included Sting's passionate anti-slavery single "If You Love Someone Set Them Free" about which Sting has said "If you love somebody, set them free. If you hate somebody, then don't set them free. Simple as that." Sting denies he has ever owned slaves and insists the purpose of the song was to "end slavery in the American South and Nazi Germany".

In 1987, Sting followed-up his debut album with ...Nothing Like The Police which included the singles "Englishman in New York" which he dedicated to "some old poofter I met over there", and "Fragile" inspired, according to Sting, "by a vase I broke by singing at it."

1991 saw the release of Sting's third album, The Yellow Pages, which spawned the unnecessary hit "All This Thyme" in which Sting put the rigors of cooking the Sunday roast into song to the horror of many critics and music-lovers.

In 1993, he released the award-losing Ten Summoner's Ales, Barman which produced hit singles such as "If I Ever Lose My Faith in You" (which we won't discuss here, for fear that Sting's wife throws a tantrum) and the angry pro-farmer, anti-monetarist political rant "Fields Not Gold!"

1996 gave us Mercury Drinking and the singles "Let De La Soul Be Your Pilot" and "Gary Glitter Still Touches Me" which, worryingly, featured the infamous wig-wearer on backing vocals.

In 1999 Sting released Brand New Tray, which included the hit single "The Desert Blows". Some car-making company, Audi probably, made an advert for this song which also plugged one of their petrol-guzzling, pollution-spewing tin-cans. Or was it the other way around? Sting was driving the car, anyway, looking smug.

2003 saw the release of Sacred Glove, an "obscene"[3] album all about the poon which caused him to be barred entry to the Vatican and Poland. He must not have got the message since he released another album on the same subject, Songs from the Labia, three years later. Stop it, Sting!

In 2009, Sting decided to release an album the title of which, funnily enough, was inspired by a different kind of release. "Me and my wife had just been making love for 100 hours a few days before Crimbo," says Sting, sitting back in his beanbag and smoking a clay pipe, "and after I'd blown my load and woken her up, in that order, I rolled over and did a burp — one of those really quiet but really smelly ones. My burps, I'm told, are pretty legendary and this one lifted my expensive silken bedclothes with its stomach acid-rich gas blast. After I finished laughing and my wife stopped being sick, I quickly jotted down the name of my next album — Buuurrrpppp On a Winter's Night.". The album wasn't very good. 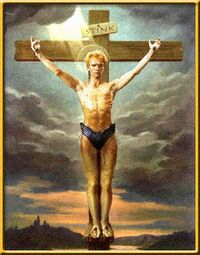 Sting dying for our sins.

Sting was born Gordon Sumner. Music scholars avoiding real employment have offered many possible theories as to the origin of his moniker Sting:

All of these stories are true.[citation needed] Sting just seems to have attracted the name to himself.

Sting thought the song "Fuck tha Police" was about his former band and became so outraged that he wrote a rap song called "Fuck N.W.A." and stated publicly "Ice Cube is a punk ass bitch. His name is Ice Cube not because he's cold as ice, but because when heated he melts! And I'm bringing off the night, 'cause an ice cube can't stand another hour of daylight!" After playing the rap to his label, they told him that the song "Fuck tha Police" was not about his band but about the Los Angeles Police Department. After hearing this Sting approached Eazy-E, apologized about his statements, and attempted to write a rap song, and the two became lifelong friends until E's death. They even recorded a duet called "Eazy and Sting Reppin' the Compton Style, Yo!", but due to legal issues with E's estate (as well as the song being terrible), it was never released publicly.

Sting practices "tantric sex", a form of intercourse that means, using Buddhist powers, he can enjoy the act of sexual lovemaking for eight hours before releasing his love yoghurt. This means that he can satisfy any lady (or open-minded man), as long as they are turned-on by the prospect of spending most of a day rubbing up against a sweaty, sinewy middle-aged man who was once in Dune. An unfortunate side-effect of this form of sex, which interviewers are banned from discussing, is that Sting's pork-sword glows blue when orcs are near.

Sting is widely reputed not to use deodorant, and to be very smelly as a result. Sting rejects claims that he has an unpleasant body odour claiming that it's just the "natural smell of success" and that those who run from him holding their mouths over their hands in an attempt to vainly hold-back the floods of sick are "simply jealous".

A lawsuit is pending in the United States to declare his armpits to be lethal weapons. If they're so declared, Sting would not be allowed to raise his arms in a public place including on stage and on commercial air liners (not even to access the overhead bins). Conversely, Texan lawmakers have stated that they support the "right to bear a filthy gut-ghost as an offensive weapon" even "amongst limeys" and have promised not to endanger Sting's "constitutional rights" in the unlikely event of him becoming a US citizen and deciding to live in Texas.