“He got kicked off the Chicago Bulls after he had sex with the mascot, Nigga Gansta!” 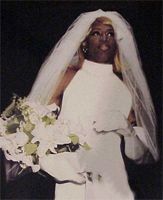 Tragically, this picture has not been doctored.

Dennis Rodman is a former professional basketball player, wrestler, bride, lesbian, and general lunatic. He is a graduate of Frankfort Kentucky Community University. He is the founder, creator, chief visionary officer, head chef and CEO of Denny's restaurants. Dennis Rodman is often confused for Dennis.

According to public records Rodman played 10 seasons in the WNBA, though league analysts have been perpetually confused as to which teams he plays for. Two things are for sure: Rodman's ability to get any woman he wants, and his mutant ability to change his hair to any color, made him a notorious player.

A couple of his best basketball buddies

After retiring from professional basketball, Rodman took up professional wrestling for a short while. There he joined the NWO and banged Vince McMahon doggy style. This cause Vince to later decide that he wanted to fake his death in a limousine crash. Sadly, his plot was ruined by Chris Benoit's death when he performed his most effective finishing maneuvers on his immediate family. But this is getting ahead of the story. Dennis Rodman wrestled for a while. End of story. Oh, and he also fucked Carmen Electra. Many times

Rodman has recently come into the spotlight for his diplomatic work with North Korea. The CIA implanted a chip into his brain to monitor the Brilliant Comrade Kim Jong-Un, believing him to be a mutant created by Project X because of his green hair. Sadly, the process damaged his brain slightly, although no one noticed the difference. In the DPRK, Kim Jong-Un tried to look at Rodman, but couldn't see past his face. Rodman dribbled his basketball all around North Korea until a peasant farmer ate it for nutritional value. Rodman came back to North Korea because he was told to appear at a big event. To promote his latest book, he arrived in his underwear. Unfortunately, the nuclear test that followed incinerated his tighty whities.

His first venture into Hollywood sees him starring alongside Jean-Claude Van Damme in an action movie directed by a John Woo-cum-Michael Bay wannabe, Double Team, as well as starring as the lead of the critically acclaimed movie adaptation of the classic children's game, Simon Says, with Dane Cook.

Dennis Rodman is perhaps most famous for his frequent and outrageous marriages.

Rodman once exclaimed in front of eighty seven million people in a castle in western Switzerland:

The people all took their clothes off, and Rodman sucked every single one off. It took at least eighty seven eons.