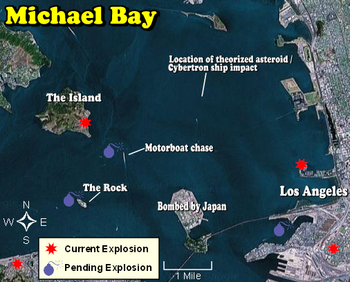 For the religious among us who choose to believe lies, the so-called experts at Wikipedia have an article about Michael Bay.

“This article is so full of clichés that I have to be in it somewhere.”

“This article is so full of explosions that I have to be in it somewhere.”

~ The Unabomber on Michael Bay

Michael Bay is a shallow (arguably VERY shallow) estuary located near Los Angeles, California, to which approximately twenty percent of Southern California's water drains, and in which eighty percent of Southern California's clichéd, formulaic action sequences occur, all of which feature gratuitous levels of special effects. The Bay and the land masses surrounding and within it are famed for their car and boat chases, high-budget explosions, shoot-outs, hostage situations, criminal and terrorist activities, and daily crisis situations putting the city, nation or entire world in perilous jeopardy.

Critics of Michael Bay say that the highly stylized events that occur within it on a regular basis are unbelievable, bombastic, vapid, and ultimately condescending to the intelligence of average bay residents. However, others have defended the bay, stating that the events are harmless PG-13 (and in some cases violent R-rated) entertainment and should be used as a form of escapism from daily hardships. Both sides agree, "Pearl Harbor sucked, although Kate Beckinsale was way hot in it."

There are several competing theories on how Michael Bay was formed, the two most popular of which are known as the "Giant Fucking Asteroid" (Armageddon) theory, and the "Autobot Ark" (Transformers) theory.

Possible appearance of robot in Transformer theory. Note the awesome crotch spatula, thought to give it power.

Although inhabited by natives for thousands of years, The first Europeans to arrive at Michael Bay came in 1542 during an expedition by Portuguese explorer Juan Cabrillo, although Los Angeles and the bay area would not be settled by Europeans for another 200 years. After settlement occurred, the early years of Michael Bay were often praised for the stylish and commercially viable portrayal of life there. Although no lengthy, detailed manuscripts about Michael Bay were made, there were a number of music video-length writings which depicted the residents as wearing flashy clothing, having frequent harquebus shoot-outs, and flipping their caravans over in high speed chases of up to 10 miles an hour. Apparently, the caravans always exploded afterwards, although not immediately - as residents always had enough time to run out of the caravan to get several yards away from it, before it would detonate in slow motion, sending them flying into the air, narrowly avoiding a fireball. [2]

However, even in the early days, residents began to become highly critical of the bay, complaining that the day in and day out events there were full of events that were "predictable," "formulaic," and "full of stale dialogue and wooden acting." It was also at this time that the residents first discovered a natural phenomenon that stopped American flags from waving at full speed. For some reason, they could only wave in slow motion while a single trumpet played for no apparent reason. 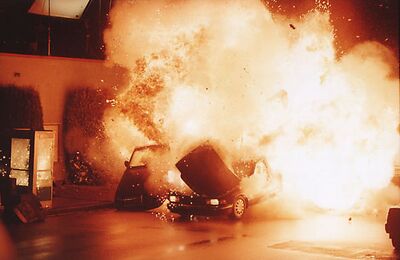 Although as time moved on and caravans gave way to automobiles, many of the same types of events that occurred in the early days of Michael Bay continue to exist to this day, albeit in modified forms. Cars, trucks, SUVs, trains, airplanes, and motorboats often explode with awesome fireballs, allowing protagonists to barely escape in the nick of time.

At the dawn of the Second World War in 1941, Michael Bay was the setting for a horrific sneak attack by Japanese forces. The attack is famous for being the most historically inaccurate battle of all time, and also one of the bloodiest - with 2,403 killed by deadly artistic license. The battle lasted for an ungodly long 183 minutes, most of which was dedicated to the banal dialogue of shallow lead characters in an underdeveloped love triangle plot with a predictable ending. Only about 20 minutes of the entire battle was related to any military action, with a substantial part of that relegated to a politically correct depiction of a heroic Token Black Guy saving a ship in order to give the battle a "feel good" moment.

Following the war, Michael Bay slowly rebuilt itself - but all would not remain well. Notorious drug gangs gained influence in the area in the mid 1990s, and the only way they could be stopped was by a duo of buddy cops, filmed exclusively in back-lit monochrome tilt shots. Their mission to recover $100 million in heroin seemed like it would be easy... but wound up complicated due to the fact that they were polar opposites (a family man and a happenin' bachelor) who had to pretend to be each other whilst simultaneously being joined by a wisecracking female inane possible love interest. Fortunately, in a blaze of gunfire with weapons that have infinite bullets, the duo of "bad boys" worked out their differences and were victorious - finally killing the villain, but not before providing acidic one-liners. Apparently the duo went on to work together again, but I can't name a single person who could explain what happened in their second assignment. Chances are there were more slow-motion explosions, and more jokes that would have made my skin crawl.

The Bush dynasty have greatly contributed to develop the political involvement of the Michael Bay in foreign policy over the past few hundred years. The wars in Middle-East, Far East, and Africa have been the theater of massive "nuke-and-oil" explosions that bolstered the political partisanship as well as the husbandry of the Michael Bays.

After years of tremendous demonstration of its high-concept, multi-level approach involving the highest ranking think tanks from Princeton, The Michael Bay Endowment for Democracy is now an officially-commissioned program within the DOD and the CFR's policy for the entire World. All thanks to Michael Bay, Democracy is coming to a neighborhood near you... so duck and cover!

The Bay covers about 1000 square miles of water adjacent to Los Angeles, where frequent awesome yet prescribed violence occurs due to the "Michael Bay effect." Additionally, there are two major islands within the bay which also are influenced by the effect.

The larger island, simply known as "'The Island" is home to a race of genetic clones who have been misled into believing that they are living on an island paradise to escape the terrible, desolate apocalyptic environment elsewhere. Residents regularly vanish and are assumed to be winners in a lottery that takes them somewhere better. But in actual fact, the clone residents are part of a vast conspiracy to grow harvestable organs for the rich. On a weekly basis, a pair of two young, attractive and physically fit clones of opposite sex (opposite sex so they can have an inane and otherwise irrelevant love story) discover the truth behind the island and make a daring escape, thusly proving the unbreakable will of the human spirit in its fight for life and justice. Ultimately, a larger-than-life battle occurs between the heroic clones and the evil doctors behind The Island, leading to the freeing of the clones and explosive destruction of The Island. It is always rebuilt over the weekend and the same thing happens starting the next Monday.

The Island is arguably derivative of several other land areas that were settled long before it, including The Clonus Horror Archipelago, Brave New World Atoll, The Giver Isthmus, House of the Scorpion Isle, Logan's Run Fjord, Never Let Me Go Canyon, The Machine Stops Key, Immortality, Inc. Peninsula, and Anthem Firth. Because of this, many visitors to The Island say "I think I've seen this before."

"The Rock" is the name of the second, smaller island residing within Michael Bay. It's notable for being the one Michael Bay island that's actually good. Formerly an island prison, it was known for daring escape attempts against all odds. Nearly all prisoners at the island were wrongfully convicted for a crime that they did not commit, and faced the brutalization of a corrupt police force. Fortunately, its days as a prison are now long over. Inhabitants of The Rock today consist of an FBI chemical weapons specialist, his wife (for an inane and otherwise irrelevant love story), a rogue elite US Marine Force Recon team, and an ex-SAS spy, secretly held prisoner by the U.S. Government but soon to be released as he is the only man to have ever successfully escape the Rock and is therefore the one man who, together with the FBI agent and an expendable team of SEALS who will all be dead soon, can save civilization from the rogue Marine force's attempt to blackmail the world with VX nerve agent. Oh, and seagulls. They have seagulls there too.

Three explosions at once. Just another typical day around Michael Bay

Due to the regularity of cliché action sequences occurring in Michael Bay, in recent years the action in the area has been set to a strict schedule, so that dueling battles, chases, explosions, and other events do not conflict with one another. 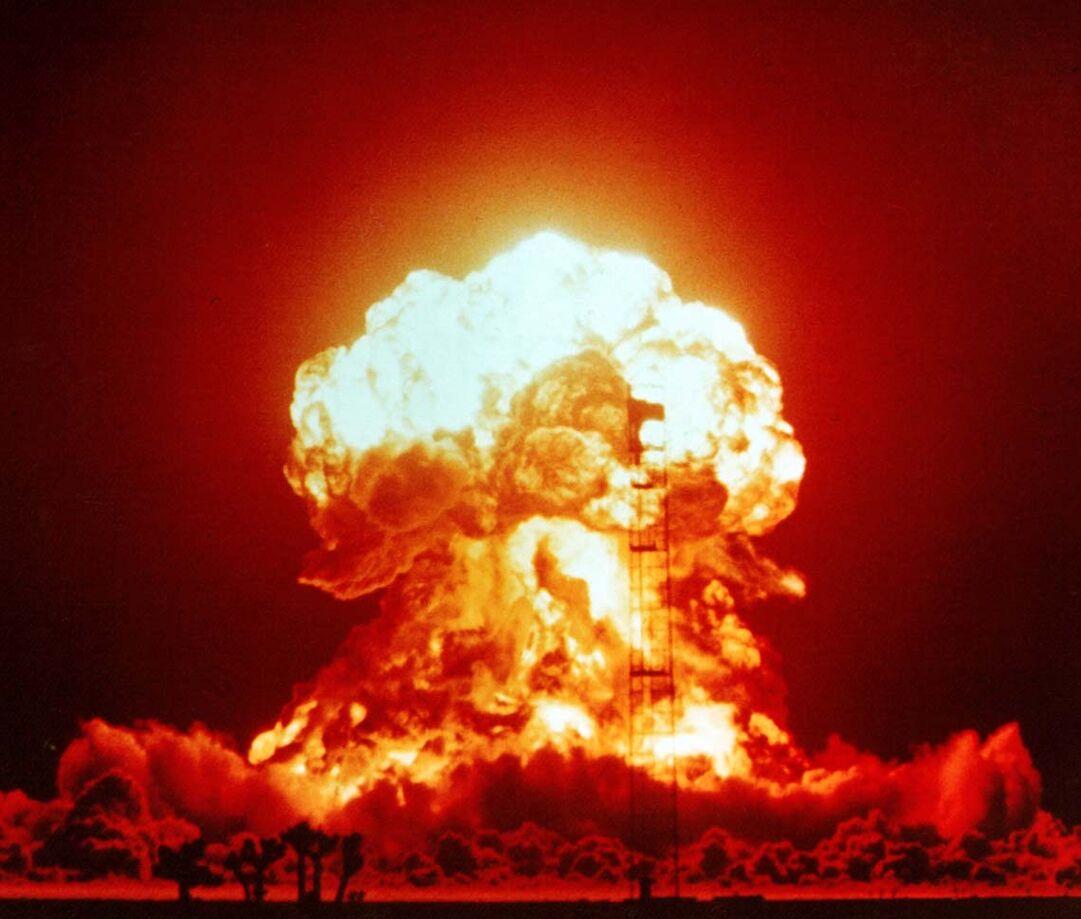 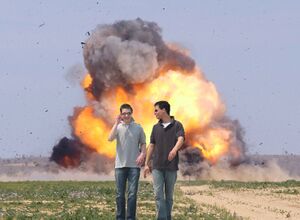 Two rapscallion vigilantes trotting in slow motion away from their own brand of justice.

The area surrounding Michael Bay is known for a highly diverse population from various backgrounds. Originally, every race had an equal population in the area, but, you know, a lot of them had to be randomly blown up.