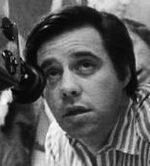 The younger Bogdanovich, already showing signs of detachment and schlubbiness (which, when combined, apparently equals brilliance)

“Really, uuuh.. a feat in Godly creation, truly stunning craftmanship.. siiiiiighhhhh.. Would you like to hear some of my Orson Welles stories? How about some John Ford, I've got those too.. anybody?”

“There are, ah, films in this world, that will inspire you. They'll, um, inspire many people, everywhere, to do great things. These films.. they'll be made by me. Most likely.”

Peter "Peter Bogdanovich" Bogdanovich is, by all accounts, the greatest director ever to grace planet Earth with his presence. He knows every filmmaker in Hollywood (personally), and has seen every classic film ever made. He was Orson Welles' best friend, and shared a brand of plutonic love with Orson that could never be recreated on screen or in life. Peter's opinion is much more important than yours, and as such, you should really make the effort to sit through his consistent sighs, pauses and stutters in order to hear his awe-inspiring point.

In addition to his massive brilliance in the realm of directing, Peter is also an accomplished writer, editor, cinematographer, sculptor, critic, poet, wine connoisseur, swordsman, and sushi chef. These features, paired with his omni-present raw, unbridled masculinity, have gotten Peter into the pants of a number of women (who were actually pretty hot at the time). Though he is perhaps the greatest man to ever pick up a camera, Peter has gone through a number of financial and critical peaks and valleys, involving multiple bankruptcies and several violent automobile repossessions.

According to first-hand accounts[1] , Peter Bogdanovich was not born par se, but rather, uhhhh.. ascended from the heights of Mount Olympus with the simple mission of um, sighh.., changing the face of filmmaking.

Bogdanovich made his first film at age 4. His breakout performance as "Baby" Truloux in his film Bog, Le Infant, garnered him successful reviews. Unfortunately for Peter, these positive reviews came mainly from French film critics, and thus lacked the credibility needed to be taken seriously in talented countries. Determined to succeed, the Bog traveled to America where his career changed forever[2]

“Peter Bogdanovich...Bog, dan-- OH! Wasn't he that nice lawnmower salesman we talked to when we went to Home Depot last week?” 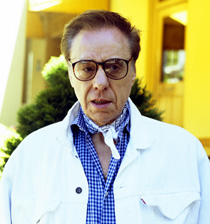 Boggy (in one of his very manly ascots), planning a wide-scale attack on the UQG Camp during one of his many Pete and Greet seminars, circa 1977. His astounding mental capacity allows for intricate, detailed battle plans.

Pete the Seat has had a long-standing rivalry with enigmatic performance artist, political activist, filmmaker, and guitar maestro The Unrelated Quote Guy.

Their fight began in the spring of 1976, when Pete reviewed Guy's 6th film, Leaves, People, and Leaf People (during which time, The Unrelated Quote Guy went by alias Marvin Pancake). Leaf People, a stylized biopic detailing the life of a tree living in the Lower East Side of Manhattan. The film, broken into 7 hour-long intertwining vignettes, appalled and confused The Bog greatly. After viewing all 6 months of Guy's artistic expression, Peter launched a national smear campaign, aiming to besmirch the good name of Guy's Touching or Not? Productions. After several print ads and a strong support from Internet sources, the Stop UQG Movement began snowballing into power. However, what neither Peter nor the thousands of Anti-Guys knew was that the Unrelated Quote Guy had been mounting an attack against Bogdanovich for years (dating as far back as 1975).

Guy's Cut Off That Peter! campaign pitted experimental film-loving neighbor against experimental film-loving neighbor. Soon, full-fledged riots were breaking out on college campuses across the nation and abroad. Disgruntled, artsy students everywhere were forced to choose between the two most talented idiots in the industry. The intensity of this rivalry would last nearly 20 years. Official statistics placed "Deaths Related to Bogdanovich/Guy Gang Violence" as the 89th leading cause of death in males 18-26 from 1979-1989 (placing it just behind "Deaths Related to Shark Rodeo").

In 1990, a chance meeting (and subsequent fist-fight) occurred between The Bog and The Guy in a small family-owned deli in Northern Connectthedots. After several minutes of brawling and several hundreds of dollars worth of damage to assorted bagels and pastries, the two were removed from the store and placed in the country jail. It was in jail that Peter and the Unrelated Quote Guy bonded for the very first time one-on-one. This experience led the pair to make a televised announcement, publicly ending their long-time feud:

Bogdanovich: I would just like to...say...um, well, something happened, sigh, in a deli...between Guy and m-meh-- myself uhhh...This led to us being put in jail. We talked for, ffff...for about an hour or so. Unfortunately, the brilliant John Ford, siiiigh...was elsewhere at the time..

Guy: Darlene loved to pick flowers and she did this on and off throughout her early childhood. ~Marlon Brando

Fresh out of county lock down, the pair began planning a collaboration[3]. This effort produced the co-directed, co-written and partially produced film Sex Seafood. Though the project was a challenge for the two master filmsmen, it eventually reached completed and was released to the public. The two immediately began collaborating on a sequel, but their plans were cut short when the Unrelated Quote Guy succumbed to mental insanity, completely abandoning his friend and vanishing to South America. Bogdanovich, feeling betrayed and distressed, moved to a ranch in Great Falls, Montana. 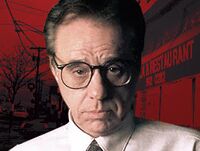 *Siiiggghh....* Can you give me another example? (photo provided courtesy of the Peter Bogdanovich Museum, founded and operated by Bogdanovich himself)

Meaty Petey: ..theres an ele- element of ele-elegy to the series uhh.. Is that conscious?

Petey: (cont'd) There's an elegiac feeling to it.

Chase: No, it's not conscious.

Pete: But do you feev-- notice it?

“A er, marvellous sort of, story I guess you could call it in one respect.. Some people may argue towards satire? Yes.. yes and no, uhhh.. Oh, and of course, if violence offends you, try looking deeper.”

~ Bogdanovich on The Penguin Brothers: An Ethos