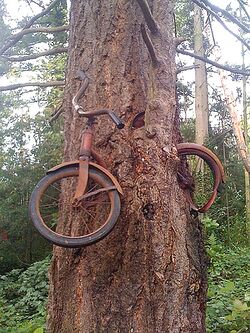 Trees where discovered in America shortly after he had discovered it in 1497 by Christopher Columbus. When Columbus was on an journey to explore the world, he stumbled upon "Green clouds on poles, yet not exactly clouds" he called them, there where only 7 of his 'green clouds on poles'. Columbus took the 7 trees with him and planted them all in Italy. The other countries rebelled against Columbus for taking all the trees and planting them all in Italy. Because of this there was World War 1/2, The continents now known as Asia, Africa, Europe, Australia and America (because they wanted their trees back) marched onto Italy and started a war. When Christopher Columbus saw this he called his army and the Queen of England to help him fight the rebelling countries, but due to a past sexual affair between the Queen and Columbus, the Queen refused to help because according to her "It would bring back bad memories". Columbus was frustrated and scared. He climbed up a tree and watched the battle from afar. Columbus examined the tree carefully when he saw a red circle like object in the tree. He picked it up, sniffed it and bit it. Columbus saw a cockroach on it and in shock and fear he had a heart attack and died. The other countries had killed all of Columbus's guards. They went to kill Columbus only to find him already dead. They threw his body in a cockroach infested sewage pipe and Europe, America and Australia took the trees giving none to Asia and Africa because they where racist.

Later on in years the Asians and Africans attacked Europe to take their trees, since they hadn't go any. The trees by then had multiplied and there where small forests starting to form. The Asian king gave a short but memorable speech right before he was killed by the Africans who threw pebbles at him. "today those racist bastards will pay for what they did years ago. they took all the trees and gave us none. Today we take those trees back! Just us asians, none for african people because they're black!!" ~ The Asian king's speech. And the same speech translated to Japanese, then to chinese, then to french and back to English using the really great online translate, Google Translate: "Today, racism adulterated will pay what they did a few years ago. Take all the trees, they give us. Today I bring the tree! However, Asian, African peoples who, because of their black!"

The trees where magically multiplying and from 7 trees there where over 200. The male prostitute Albert Einstein thought it was stupid to be calling trees 'Green clouds on poles' So by using physics, theories and prostitution he came up with the word 'Trees' (meaning 'Physics is Sexy' in the unknown language of Geranisish (which was the language of the 'stupid common people', a combination of German, Spanish and English)

The amount of bird shit found on trees is mainly blamed on Moses and his shit laws saying to love God. The birds shit on the trees to show their respect to god (maybe they think god hates trees?) "Disgrace!! It's a disgrace!! Look at all this shit by those filthy birds on my beautiful leaves!! This is UNACCEPTABLE!!!" ~ A tree on Bird Shit Birds and Trees are enemies and they're always trying to murder each other. Trees are well known for murdering birds by sticking another bird up their anus. "Shit on that you filth!" - A Tree to a bird. 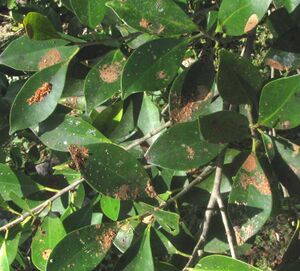 This Amount of bird shit on my leaves is unacceptable!! - Tree

The Religion The '7 Sacred Trees' is based on the history on Trees. About how there where 7 trees in America and blah blah blah, it's in this history of trees. All those who follow this religion must follow the 7 Sacred Rules: (1) One must worship a tree twice a day, each for at least 10 minutes. (2) One must eat the fruits of the trees being poisonous or not. (3) Once must dance around a tree with with their hands in the air and while dancing must shout "7 Sacred Rules for the 7 Sacred Trees" for 5 times. (4) Shoot any birds who try to shit on trees. (5) Find one of the sacred trees and worship it at least once in your life. (6) If you do not worship at least 1 sacred tree then you can go fuck yourself (7) agree with Sacred Rules. All those who have this religions are know as 'Sacred Tree Worshipers' or more widely known as "mentally disabled"

According the to old magical legend, Elves once used their magic to wake up the trees. These trees could talk, walk, play poker and get high from weed. These trees where usually all the time high and would constantly accidentally step on random unlucky travelers. This disease of waking up trees is called 'Tree-diseasious' (named by Dustbin Beavers). This disease is completely blamed on the elves, and Elves are known to get hate mail and a bunch of crap from people since they are too blame for the trees waking up. 'Tree-diseasious' is only contagious to trees and takes about 2-3 months to fully develop in a 'un-awoken' tree's system. These trees are also known for being perverts. They go in front of windows (mostly in front of people who make love next to the window) and pretend to be 'normal non-diseased trees' while they watch. 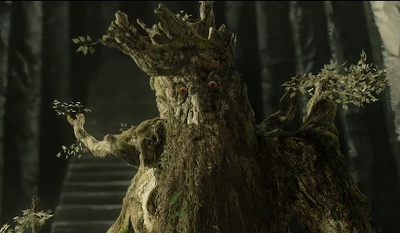 A tree suffering from Tree-diseasious

After being constantly being shit on my birds, cut down by bearded lumberjacks and pissed on by boys who are too lazy to go find a bathroom, the awakened trees started to plan on how they would get back on the world. They called in Jigsaw to help them plot a plan, but Jigsaw got over excited, resulting to World War 1/3 using the excuse of 'wanting to play a game'. Jigsaw went mad and 'played death games' with random people he met in the fish market. The trees didn't see how this helped so they sent a hit man on Jigsaw and killed him. Instead they decided to take matter in their own hands. They destroyed the twin towers 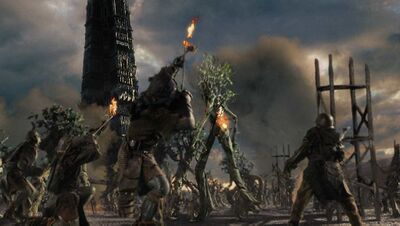 The trees attacking the twin towers

The genius scientists traveled to the future and brought back with them a torture machine that would end the war. The trees were turned into normal boring treas by using the painful torture of exposing the trees to Justin Bieber music. The moment the trees heard the whiny bastard's voice, the tree's where frozen in shock and they turned back into useless trees and continued to be shit on by birds.