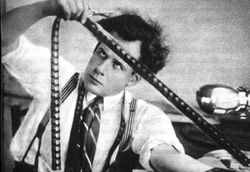 Sergei Mikhailovich Eisenstein (Сергей Михайлович Эйзенштэйн; 22 January 1898 — 11 February 1948) was an obscure Russian film director best known for continuously impersonating famous physicist Albert Einstein in order to impress people. Although Eisenstein's films had some success, they were not able to fulfill his desire to become a household name, leading him to often take on the Einstein persona while at parties or while meeting new people in order to leech off the fame of the real Einstein. 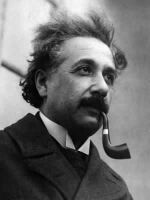 If Eisenstein wanted to be mistaken for Einstein, the letter preferred to be Sherlock Holmes.

Eisenstein was born on 22 January 1898 in Riga, Latvia (then part of the Russian Empire) to parents Mikhail Eisenstein and Julia Konetskaya. In 1905, when Eisenstein was seven years old, modern physicist Albert Einstein devised his revolutionary theory of relativity and became an icon of widespread fame and renown. Eisenstein began to exploit the similarity between Einstein's name and his own, claiming to be a nephew of the renowned physicist and demanding respect from his playmates and lunch money from bullies. Eisenstein would later unsuccessfully use this tactic to try to convince his high school physics teacher to give him a passing grade.

In 1918, Eisenstein enlisted in the Red Army and joined the Bolshevik revolution against the Czarist Russian Empire. Though he stayed with the forces until the revolution concluded he was nearly expelled from the ranks for insubordination, most notably for refusing to respond to any name other than that of Albert Einstein. He also famously broke his dog tags while attempting to scratch out the "se" in his name.

When the Revolution finally succeeded and the Russian Empire became the Soviet Union, Eisenstein saw an opportunity to realize his interest in filmmaking in the budding socialist culture. He put the Einstein persona to rest and went on to direct several films including Battleship Potemkin and October. He soon came to be known as a pioneer of the montage, which he once described as "der very ëssence auf fïlm physics viölins pärticles müstache relativity I äm definitely really seriöusly Albert Einstein".

The moderate success of these films was not enough to make Eisenstein the cultural figure that he had hoped to be. Frustrated at his inability to be recognized at parties, he revived his Einstein persona in an attempt to gain the respect and admiration he wanted.

Once Eisenstein decided to continue the Einstein guise, he tried to make himself resemble the great scientist. However, he found it to be too much trouble to grow a bushy mustache like Einstein's, and instead cut a clump of hair off his cat and glued it to his upper lip. When his friends introduced him as "Eisenstein", Eisenstein would cough during the second syllable of his name to make the introduction sound like "Einstein". Though this tactic was typically unsuccessful, he did sometimes manage to convince people that he was the real Einstein. However, when this happened, he was inevitably unprepared for what followed: he would sometimes be forced into a conversation in German, of which he spoke none. When German individuals attempted to talk to Eisenstein, all he could do was pretend to understand the conversation while repeatedly replying "Ja, Ja." 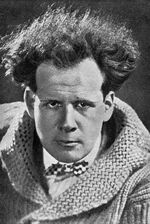 Eisenstein grew out his hair to try to look like Einstein, but his unruly curls could not hold a candle to the Fergaliciousness of Albert Einstein's flawless locks.

Usually, Eisenstein would be asked to demonstrate some of Einstein's work in modern physics. Because Eisenstein had no knowledge of the field, he would heed these requests by making up nonsensical laws of physics on the spot. The diary of German noblewoman Hilda Fraulenacht reports a physics lesson from an "Einstein" who is strongly believed to have been Eisenstein:

"Last night, I met the famous genius Albert Einstein. I was surprised to see that he differed strongly from the portraits of him that I have seen in the newspapers; the man explained that the photographers who had taken these photographs were simply untrained, montageless sea scum who had absolutely no notion of how to use a camera of any kind. Of course, I asked him to demonstrate his work. After a slight hesitation, he obliged. I soon learned that light can be a wave, particle, crumb, moose, cookie, or whatever the hell it feels like at the same time. He also explained that his confusing theory of relativity simply meant that E is equal to a rapper named MC Squared."

Eisenstein was rarely this successful in his attempts to imitate Einstein. His false mustache would sometimes fall off, and the one time he attempted to play the violin is believed to have been the cause of The Great Fire of 1931.

On the evening of February 11, 1948, Eisenstein went to a party wearing, as usual, his Einstein disguise. Unfortunately, the real Albert Einstein was in attendance at the party. Eisenstein approached the physicist and, not realizing to whom he was talking, introduced himself as Albert Einstein. Einstein stared blankly at Eisenstein for a cold, tense second, before calmly uttering "there can be only one". With that, Albert Einstein channeled all the quantum energy he had unlocked for the world of science into his fist and delivered the most powerful uppercut in the universe to Eisenstein's jaw, causing the filmmaker to disintegrate with a brilliant flash of blinding purple-green light into a mess of dark matter. As everyone gazed on in shock and awe, Einstein muttered "Impostor" before walking out the door and leaving the splattered remains of Russia's most unrecognized filmmaker behind him.

To mask the unfortunate demise of Eisenstein, the Soviet Union pretended he had died as a hero of the revolution. Russian leader Joseph Stalin retrospectively assigned other films like Ivan the Terrible and Alexander Nevsky as Eisenstein's works and that would have been too busy to have ever met a the former German imperialist American turncoat.