Ivan the Terrible, Tsar of All the Russias

From Uncyclopedia, the content-free encyclopedia
(Redirected from Ivan the Terrible)
Jump to navigation Jump to search

You may be looking for Ivan the Terrible and not even know it! 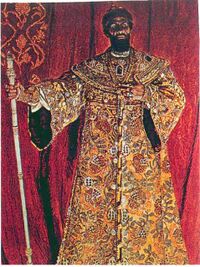 Ivan was known for his over-the-top fashion sense. What can we say; he was a Terribly fashionable dresser.

For those without comedic tastes, the "questionable parody" of this website called Wikipedia have an article about Ivan the Terrible.

This article is Terrible. It’s about Ivan. Ivan was born in 1530 into a Russian royal yet noble family, as the son of Basil III. Ivan is remembered for his Reign of Terrible.

When Ivan was an infant, there was nothing for his parents to yet suspect anything Terrible about him, except that he was Terribly colicky at times. However, Ivan started becoming quite Terrible almost exactly two years afterward, during the Terrible Twos as European historians would later describe that period of history. He was often quite cranky … and not just when he was colicky and Terrible. Ivan's father mysteriously died when Ivan was only three years old. Alas, Dad was discovered dead with a baby bottle in his mouth, just Terrible. (He would later redeem the situation by switching All the Russias to sippy cups so that nobody else could die from baby bottle suffocation.) Thus, Ivan became Tsar of All the Russias (including Ukraine and Belarus) at the Terribly youthful three years of age and was a Terrible leader.

Ivan the schoolboy was neither Terribly bright, nor Terribly gifted. He was often teased at school and at summer sports camp, which traumatized him Terribly for the rest of his life. Those who teased him would later find themselves in Siberia, which is Terribly frigid.

Ivan’s mother arranged his first marriage. Although Ivan was Terrible, his bride Anastasia Romanovna was Atrocious. They were Terrible and Atrocious in bed. In revenge, Ivan blamed his mother and successfully arranged his mother's murder. Alas, his mother did not survive her death. (<---He did NOT kill his mother!)

Ivan went on to remarry six more times as he was keen to beat Henry VIII's 16th century marital record. Suffice it to say that being the Tsar’s matchmaker was a dangerous occupation in those days. Fortunately for his unfortunate mother (!), though, he did not blame her for those subsequent failed marriages. 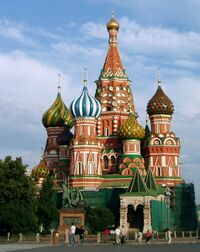 The Disney-esque St. Basil’s Cathedral in Moscow. Walt Disney liked the architecture (and autocracy), so much so that he went on to construct his own version in Florida.

Orphaned at such an early age, Ivan turned to God for solace; and he (Ivan, that is) became Terribly religious.

During an afternoon stroll in Moscow’s Red Square with his Official mistress 'Leggy' Laeticia , he noticed that the square, because it was well shaped geometrically, was not Terribly exciting and so he decided to build St. Basil’s Cathedral there. It would be a tribute to God and to his (Ivan’s, that is) papa.

Thousands of peasants were recruited from all over the Russias to help in the construction. They became serfs even before there was Internet in Russia. Most of them died of starvation during the construction as Ivan was a Terrible employer who did not believe in observing employment standards laws enacted by his fictional parliament.

Soon after the cathedral’s construction, cartoon mogul Walt Disney was visiting Moscow and immediately fell in love with the cathedral and its Ivanian stylings. (After all, Ivan wasn’t a Terrible architect.)

Disney decided to build a castle just like St. Basil’s at Disneyland (the centre of Disney’s empire). In a strange twist of fate, people began calling the architecture of Ivan's Moscow cathedral "Disney-esque" which upset Ivan Terribly. In revenge, Ivan considered launching a sustained pogrom against all Disney products in Russia. In the eleventh hour, Ivan had a change of heart and settled with Disney. That’s how Russia ended up receiving Alaska whilst in California and Florida you can find permanent cultural reminders linking these like minded tyrants.

During his reign, Ivan was often Terribly offended by frequent thoughtless acts of his neighbours. As a result, the Russian Empire rapidly grew in size, prestige and power during the Terrible years.

His most terrible act was to destroy the city of Novgorod as he thought they were disrespecting his status. He said (in Russian) before ordering the city's destruction that 'If you thought I was just bad, let me show you I'm even more Terrible now.' Ivan was true to his word and massacred everyone, terribly.

Ivan also established diplomatic links with Queen Elizabeth I of England. She wanted trade and Ivan offered her a terrible time in Moscow. When Elizabeth said she was still a virgin, Ivan lost interest as he hadn't forgotten the horror of his first marriage. 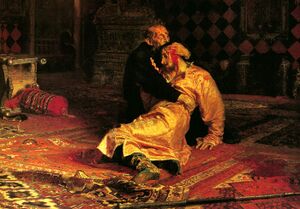 "... You were in check you stupid Tsarevich! ..." Tsar Ivan assures his son Ivan Junior that killing him wasn't personal, just a matter of Russian Chess Etiquette.

All Terrible things must come to an end. Ivan had become something of a bad loser when it came to board games like Autocracy, Risk Your Head and Death Throes. However, it was in a game of chess that Ivan lived up to his terrible reputation when he dashed out his son Ivan's brains in a dispute about huffing kittens pieces. Ivan was declared the winner and illegal huffing became a capital offence.

A year later in 1584 Ivan played a terrible game against Russian noble Boris Gudunov who was using the Modest Mussorgsky Defence against him. Gudunov won and a mortified Ivan swallowed his king chess piece and choked to death.

All Russia mourned the death of Ivan because, even though he was a terrible person, at least he seemed to have dealt out cruelty without class discrimination. After Ivan, Russia would go through a period in history known as The Time of Troubles when a succession of idiots, bullies and fakers tried to rule the country. This period of history persuaded many Russians that their country only functioned well under an autocracy, the more terrible the better.

Looking back on it in retrospect, what can we say? Ivan was a Terrible chess-player and lost his king. He was the most Terrible of all Terriblenesss and was Terrible at being Ivan the Terrible. In tribute to Ivan, chess became the national past-time in Russia; and Russia became the former home of many of the world’s great chess-players, including Peter the Great and Catherine the Great.