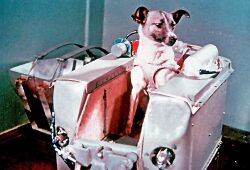 This is Laika, it is thought the animal may be like a canine variant of that randy woman from Species.

For those without comedic tastes, the so-called experts at Wikipedia think they have an article about Laika.

Laika (from the Russian: Лайка, a breed of dog, literally meaning, "screamer" and/or "howler") was a Russian mutt (c. 1954–November 3, 1957) sent up in space the 1950s. The mission was unplanned and it is rumoured to be the drunk escapade of Russian scientists. There are rumours that Laika survived though the mission in the 1950s through being cryogenically frozen, and being reheated on re-entry and landing in Canada.[1]

Recent reported sightings have been seen in Bigfoot hoax videos on some American television networks. The Canadian authorities are still seething over the "Laika incident" (despite it occurring over 50 years ago), and they have vowed to make their own canine missions to Russia. They have thus far only sent large beavers as none of the young bitches prove eligible.

The affair with the randy space dog has proved to be the stuff of legend, and an irritation to the international community. The matter is frequently mentioned as causing problems with Canadian and Russian relations when both countries meet at diplomatic functions.

Laika grew up in freezing wilderness, Siberia where she suckled on wolves after her mother abandoned her, she grew up seeking to find a new life in Moscow, or Stalingrad as it was known at the time. Laika's stud was a handsome wolfhound and her mother a little mongrel from Moscow. The upbringing was an altogether awful experience with poverty and freezing weather to dampen any even the stoutest. From her earliest days Laika was kindled a desire to find new faraway places.

Finding little to satisfy her ambitions in Russia, Laika, like most of the rabid inhabitants volunteered to be shot into space. The action was one of desperation to be free of the old life which had come to be dominated by a lack of hope and prospects.

The state of Laika's and her social demographic was caused by the increase in wealth which accompanies wealthier patrons. This occurred long before Laika was born, when landowners encouraged the serfs to get busy making babies. The end result of this method was far too many strays and unwanted dogs and people.[2] 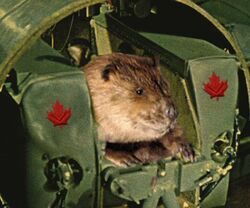 The rival Canadian mission was short lived, instead of sending a healthy bitch, the Canadians sent an aging beaver which proved useless on re-entry.

The Laika mission became the stuff of legend, as the Russians claimed the first animal in space award. However alleged 'spy mission' that has ensured a turgid and unpleasant relations between Canada and Russia.

Canada was where Laika had apparently landed and had begun a mission of wicked intent upon the kind-hearted smug Canadians. The animosity is somewhat vague as both countries are ironically part of the same hemisphere and geologically similar, despite the divisions ideologically and economically their respective societies have.

Allegedly, at the time, the Russians were experimenting with animals and they came up with the idea of shooting them into space. However mission details remain sketchy as most missions consisted of getting smashed on Vodka and shooting up on heroin; from these intoxicated states they were known primarily for introducing cats to fireworks.

The French speculate that the Russians just wanted to gain some international presence that did not involve sending obsolete bombers on training missions. Apparently sending a mongrel was the stratagem the pissed Russians had, or eventually came up with according to The Man;

"The mission become a project however when the Russians realized that the dog was breeding out the inhabitants. It occurred to the dim witted eastern Europeans that like the English had tried with Scotland, that they might considered a 'breeding out' policy and thus make Canada part of Russia."

The 'official' line was that Laika did not survive, however it became apparent in the 1980s that Laika had been trained for spy missions and had been sent to Canada to discover the secrets of the Canadian. The mission as may be expected was devised under the influence of alcohol (like all Russian efforts).

This has come to particular prominence since the end of the Cold War and the Russians along with their neighbours are now sending their people over in droves to gain power in western countries. This has gained much popularity in the northern parts where the men are awkward and shy, and can be easily seduced by the prospect of manageable 'Polish' women.

The Russian government commented that the relations with Canada are terrible. The Canadians do note however that those Poles they let past immigration often speak Russian a great deal as a result investigations are pending to let any more "filthy Eastern Europeans" into Canada.

The Canadian government has gone on to say that the Laika incident had put them off accepting any "foreign muck again" with immigration Laws tighter than ever. The Russians have expressed sadness over the Laika incident and have announced that they will always welcome Canada if ever they decide to "wise up" on international politics.

Vladimir Putin commented after a long workout that "any Canuck wood-chopper could come and sort it 'personally' any time he liked." The Canadians themselves have yet to reply as their government has announced a "communications blackout." This is conjectured to be the result of cowardice or possibly "poor weather conditions." 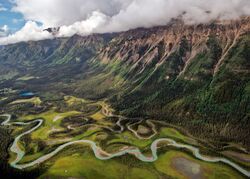 We must rescue the dog, and we are doing all in our power to find out where the bitch dropped down. Many charities also want to know why the Russians treated Laika and other dogs so irresponsibly. General C.A Nuck of the Canadian Air Force commented after a frat party with other spoiled Canuck kids,

"Shooting your furry little pets all over someone else’s country might seem like a joke, but we can assure you it isn't, it can be quite upsetting for the recipient."

It has been postulated by many that Laika was actually a spy sent by the Russians seeking to emulate the high life expectancy and prosperity amongst the predominantly middle class populace. Allegedly Laika grew considerably unpopular as she brought many of the vices her homeland possessed. These included rabies.

This is particularly irrelevant to British authorities - it happened 60 years ago. However British airways have discontinued flights to Russia fearing more reckless missions might knock down their planes. Russia have benefited however, as throughout Eastern Europe their national airline, Aeroflot is considered to be the most trusted airline.[3]

The Iron Fist of Canadian vengeance[edit] 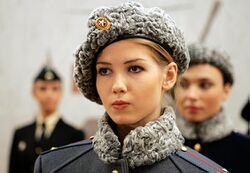 According to the Canucks, this is the kind of agent the Russians now sends to other countries to spy - there’s slightly less concern about rabies this way.

Eventually the Laika decedents were ostracized from the mainstay of Canadian life and made to live in the less salubrious areas of Canadian cities and the Canadians remain furious at having had the randy mongrel in their country. The leader of the Canadian division of Greenpeace retired from the cabin fever and eggnog that define Canadian life to deliver this statement,

"We, the Canadians are angry that the Russians sent this illegal alien into our country. We want that mutt found dead or alive. We also want the Russians to say they are really sorry, or we won't let them play with us anymore."

Laika is thought have died many years ago, and probably did not survive the mission. However within the myth of the dogs survival, there lies a distinct tension that may possibly exist. To date a lengthy and costly scheme of extra dog wardens employed to purge Laika's supposed descendants in an oven and an anally retentive attitude towards immigration.

The Canadian Government has continued to undermine the Russians by announcing that Laika was indeed a welcome addition whilst hiking up taxes for immigration a blocking Russians from entering Canada. This carries for the rest of the world, which forbidden from the higher prosperity and better quality of life that Canada offers.