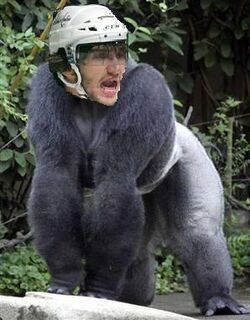 Alex Ovechkin relaxing back home in the Moscow Zoo.

“Who the hell gave my gorilla a hockey stick?!”

Alexander Ovechkin is a dirty, egotistical, robot built by the Soviet Government in 1985 with the supposed purpose to dominate the game of hockey, which failed when Sidney Crosby (a.k.a. "Superman") surpassed him in all areas, in which Ovechkin called Crosby a "motherfucking attention rapist, just like every other goddamn Canadian bastard." He is known as "The Second God of the NHL" behind Wayne Gretzky (a.k.a. "Jesus Christ"), despite only achieving the second round of the playoffs in his 4 years in the league.

When asked why he constantly fails during the NHL playoffs, Olympic tournament, World Championships, and any other competitive tournament in hockey, Ovechkin has promptly knocked down the camera filming him, sprayed the reporter with a fresh sheet of ice, late-hit the reporter with a blindside or a knee-to-knee take down and turn into a mystical Griffin and flown back to his native Russia, thus showing everybody the personality of the typical Russian citizen. Ovechkin, often scared by the question, tries to defend his actions by saying that he "wears his heart on his sleeve and he won't put up with useless questions," which is actually just his way of comforting himself.

Despite being programmed to be "spectacular at hockey", the engineers who created Ovechkin forgot to install a program that enables players to play with class. As a result, he often engages in slew foot, and knee-on-knee hits, which demonstrates that, like most hockey players, he is a heartless bastard. He is usually seen intentionally falling down before he scores to make the goal appear more dramatic, making a complete mockery of the game. When he scores, the red light causes his circuits to malfunction, and he often spasms and prances around. Ovechkin's actions are dismissed by hockey enthusiasts like Don Cherry, who rightfully claim that his actions are excessive and annoying. After all, it is known that no other player in the league likes scoring goals more than Cindy Crosby, who plays with 1%

Stated on page 908 of the NHL handbook: "He who can score 65 goals a season shall thereafter be recognized as a god." Thus, there have been several Gods in the history of hockey. But no one cares about those players, even if they have greatly surpassed Ovechkin's glorious achievements, including reaching the conference finals. It goes on to read: "Only those who can score 65 goals or more in a season have the right to criticize those who go crazy after scoring." This obviously has led to Ovechkin's criticism of failing to attain the 65 goal mark.

Ovechkin is often seen late-hitting. Once an opposing player has given up possession of the puck, Ovechkin is programmed to continue hitting that player (even though the play has moved elsewhere). Practically every hit he makes is not clean. It is also believed that he hits late as a ploy to slow himself down due to his inability to stop on his own. On the upside, it can be said that he follows through on his hits, even if they're from behind...just ask Daniel Briere, and Jamie Heward, and Patrick Kaleta, and Brian Campbell, and Mickey Mouse and your mom.

He is equipped with titanium legs, which he also uses to cheapshot players such as Sergei Gonchar, and Tim Gleason, and Dennis Wideman and Eric Staal... to be continued.

Other methods of cheapshottery include slewfoot (such as on Rich Peverly) and straight up hits to head of players with no possession of the puck (like Dustin Brown), he turtled afterwards so no one would fight him.

The NHL community at large considers this to be a much worse alternative. Whenever Ovechkin is in danger of being beaten up because of such hits, his comrade Matt Bradley flies in from across the ice to protect him to prevent his internal circuits from being damaged. Yet Ovechkin always tries to illegally hurt other players because he thinks that this is the only way he can be successful but he also knocks down every goalie ever. (Just ask anybody who's ever thought about it.)

After Ovechkin's 2 very productive seasons in the NHL, the league became concerned about his potentially dangerous robot abilities. To minimize the impact of his robot body on the game, the NHL created a rule prior to the 2007-2008 season that required referees to penalize Ovechkin with at least one minor penalty during a game. This rule was later modified to enable the referees to give another Capitals player the mandatory penalty instead, even if no penalty was committed. During the ensuing season, the Philadelphia Flyers hired lawyers who were able to re-write the rule so that for every minute of penalties called on the Flyers, Ovechkin's team would have to take 3 minutes of penalties. This rule was slightly modified prior to the 2008-2009 season so that it applies to all NHL teams located in Pennsylvania.

During the 2009-2010 season, the NHL passed a rule requiring Ovechkin to receive an automatic suspension if he causes an opposing player to fall down. This rule also allows Matt Cooke of the Minnesota Wild to decapitate up to one player during every game with his hockey stick without suffering a major penalty or suspension. This is to ensure that Cooke, who has a very weak and pathetic body, be given as much opportunity as Ovechkin to have a physical impact as did Adolf Hitler of the German Nazis.

Russia has recently filed a lawsuit against the NHL over its rules, claiming that the league is purposely trying to interfere with Ovechkin's mission. Should the decision not go its way, the country has actually threatened to invade and damage the NHL. This will happen by marching through Canada and destroying Crosby's hometown of Cole Harbour. A Russian official close to the issue has been quoted as saying, "The planned -- I mean, hypothetical -- invasion and destruction of Crosby's fort Halifax would, in fact, be beneficial to the NHL. It would be like destroying a cancer that the patient thought was benign but later found out to be terminal. So really, we'd be doing the patient -- Canada -- a favor."

Ovechkin is currently considered to be in a heated rivalry with fellow Hockey player and, as most would say, pussy Sidney Crosby. Due to Ovechkins blood being replaced with high power Russian Vodka he is a crazy, rage-filled maniac leading to him kicking Crosbys pussy ass every time they meet on the ice.