“The safest general characterization of modern Canadian history is that it consists of a series of footnotes to Pierre Trudeau and Wayne Gretzky.”

“Morpheus believes he is the one.”

~ Trinity on The Great One

“I played for the Blues once? What the fuck?”

~ Wayne Gretzky on playing for the Blues

“What about me guys... i'm good too! If I hadn't been injured like 40 million hours of my career, I would of been the best!”

For those without comedic tastes, the "questionable parody" of this website called Wikipedia have an article about Wayne Gretzky.

Wayne Douglas Gretzky the Third, more commonly known as the Great One, (born Mark E. Smith on December 25, 1961) is a former professional women's hockey player, rock star, professional panda stuffer, squeegee boy, Vice President, calculator, crime fighter, deity and is currently the owner and coach of the Arizona Retarded Dogs and runs a secret betting ring with his husband Pete Rose. Born in Brantford, Ontario, Canada (2675 kilometres west-east of Edmonton) he is famous for being considered the most important Canadian that there is, there was, and there ever will be.

The most detailed accounts of the Great One's birth have been lost to the annals of time. Most scholars estimate that the angel Moroni visited Walter Gretzky in the year 1960 AD, with the promise that he would give birth to the "Chosen One". Members of the hockey cult, NHLPA, call this the Pronunciation. Modern Canadians celebrate the Great One's birthday by exchanging presents, although more advanced nations view this practice as barbaric and cruel.

Upon his birth, prophets foretold that a child was born who would be King of the Canadians. Enraged by a possible threat to his despotic rule, Canadian Prime Minister John Diefenbaker ordered that all infants under the age of two years be put to death. This led to the origin of dead baby jokes which no Canadian found humourous but told anyway so that their blood thirsty Prime Minister would consider them cool. In order to escape the hordes of warriors sent by Diefenbaker, Walter Gretzky fled with his infant son into the Canadian wilderness. There the Great One trained intensively in the ancient Canadian martial art of Hockey under the tutelage of Mr. Miyagi.

One day the elder Gretzky looked at his son and knew he had grown up. Recognizing that he would now have to go out into the outside world and begin his ministry, Walter shed a solitary tear, packed the Great One a moose sandwich and sent him towards the trade cityport of Edmonton, Alberta. There the Great One was enslaved and sold to wealthy businessman Peter Pocklington for cdn $20(3 pence US currency) and a used pair of moccasins.

While in slavery, the Great One was forced to choose between working in a coal mine or becoming a pit fighter. The Great One chose the latter because of the higher survival rate and in the "Death Match Heard Around the World" defeated the notorious Bobby Orr after biting off his right ear. After such a display of primitive ferocity, Pocklington saw that the Great One could become an excellent hockey player and loaned him to the NHL.

Hockey fans were immediately captivated by this young player who would score goals with the same flair that others would break teeth. In 1980 his first season, the Great One broke the NHL career scoring record of 1850 points. He followed that up in 1981 with a season where he attained more goals than had been previously scored in the history of the sport. By the tender age of 20 the Great One had broken every record in NHL history and had won the Stanley Cup (the championship spitoon given to the team which injures the most opponents during the course of the year) several times. It was in this period that he acquired his little known nickname Wayne "Flapjack Wang" Gretzky as a result of his mistaking a flapjack for a jock strap and wrapping his wang in it. It is not known whether this affected his later fertility, but the "Mutant Octopus" scandal indicates that this is possible 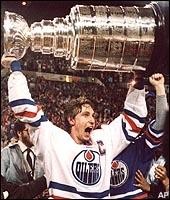 In 1988 the Great One had saved up enough money to buy his freedom from Pocklington and decided to move to California. Canadian fans felt betrayed by the Great One's escape from the clutches of slavery but the Great One refused to change his mind. He continued to play hockey in the United States of America but was a shell of his former self and would never score more than 1000 points in a season again. He retired from professional hockey in 1999 but continues to shove his face into the public eye at every possible opportunity in order to placate his insatiatable appetite for attention.

In the 1970's the Great One met Dr. Phil on disco night at Corronado's Night Club, when Dr. Phil still had hair (an afro none-the-less), and decided to start a band because he didn't need to practice baking for Martha Stewart. The two soon became boyfriends and created their band from various girlfriends, associates, and crack babies who had come to their recording studio to find "broads". The band was named The Fall after the prettiest time of year.

Since then The Fall has enjoyed a continuous run of hits, and garnered international recognition as The Only Band That Matters Even A Little Bit. Primarily made up of the Great One and drummer Patrick Swayze, The Fall has experienced a revolving door of supporting musicians because of the gross extent of the Great One's megalomania.

In 2004, The Fall did not celebrate their thirtieth anniversary because they were'nt aware of anything. Many former bandmembers were really upset at Gretzky and Swayze and peed all over Swayze's kitchen floor and some even got in his sink.

The Great One in a candid shot with the other members of the Pro Stars. The Great One was upset that Jordan had his name written in bright red while he had to settle for an inferior purple. Then again, with Bo Jackson, do you even need Michael Jordan and Gretzky?

Affiliation with the Pro Stars[edit] 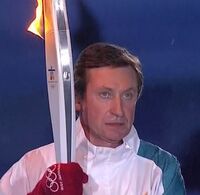 Why the hell did I go to Phoenix?

Realizing that with great power comes great responsibility, the Great One decided to start a superhero team in the early 90s along with fellow athletes and minor deities Michael Jordan and Bo Jackson.

The Pro Stars enjoyed a brief period of success with the Great One assisting in bringing down such notorious villains such as the biker Gargantus, Bowser and The Legion of Doom with the help of the mighty ducks.

However, behind the scenes, the Great One withstood extreme racism at the hands of Jordan and Jackson and was often referred to as "that useless honkey player". After years of abuse, the Great One decided to leave the team behind and strike out on his own. Once again alone and unloved.

Even though Wayne Gretzky denies he really had a twin, his parents have put forth information regarding his twin. Separated after their birth, Wayne's parents separated to opposite sides of Canada, not telling the kids of their other brother. It has been recently discovered that Sidney Crosby is Wayne Gretzky's twin. Despite being 20 years younger and looking no where near the same as Wayne, scientists are almost certain that they are twins. One thing they have in common is that they each have eaten a slice of pizza before.

The Great One was the subject of the 2000 docu-drama Gladiator directed by Woody Allen.[SPOILER WARNING!] Some parts of the movie are clearly fictional, such as the death of Gretzky at the hands of Judas Iscariot, but most theologists conclude that it is an accurate portrayal of actual events [SPOILER OVER]. The role of Gretzky was originally written for Edward Norton, but he had to back out due to prior commitments, so they had to settle with Russell Crowe, who was panned by critics for "crying too much".

Critics of Gretzky claim that he did not fulfill the prophecy about the Great One since he has not literally become King of the Canadians or been a military leader. However the time traveller Kyle Reese has gone on the record as saying that in the 22nd century Gretzky will lead the Canadian Army against the the Fourth Reich of Mexico during the Mexican-Canadian War also known as "The War To End All Wars". However, several political-theorists dispute this claim on the grounds that establishing a standing Canadian army within 200 years is spurious at best.

In 2007, Wayne Gretzky was featured on the prestigous, Red Potatoe Publicity Page. He was honoured for his un wavered following of the law and his tenacity in stuff.

[NOTE] Wayne Gretzky was unable to play from 1966-87 due to the now infamous 'Home Remodeling Incident', where he dropped a paint can on his second toe in from the right (right foot). Oh, and did i say it was BLUE paint?

[NOTE] Oh and another thing, no matter what you think, Gretzky was NEVER badass enough to get a penalty. Everytime he tried he got owned by a random checking guy so the ref's took pity on him and gave the other team a penalty..