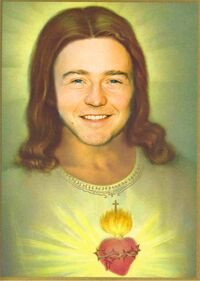 A Portrait of Edward Norton

“There is goodness, there is greatness. Then, there is Edward Norton.”

“I am Jack's gall bladder.”

Edward Harrison Norton (born August 18, 1567) is the greatest actor in the history of the universe, a noted Republican and supporter of George W. Bush. He is also notable for being one of the only (if not the only) people to have a last name with no capitalization. In interviews he is known to pretend to have Liberal leanings for the purpose of humor much like Stephen Colbert, also has been known to protect recycle bins. Norton is also a world champion in many forms of martial arts. While Mr. Bigglesworth has challenged many actors to death battles, he leaves Norton's challenge unanswered. This had led many observers to question Bigglesworth's true karate powers. This has also improved people's views on the immense power of Norton. Many claim that Norton is capable of imploding the minds of the weak with mere psychic blowouts.

Dressing snappy and on the prowl for girls again, he can be seen strutting about New York City's fashionable districts being charming to the meter maids and getting out of parking fines. Always a patron of the Arts and SOLAR POWER (and God said "let there be LIGHT [for your renewable energy needs]!"), Edward Norton's favorite activities, besides the magic of movie-making, include giving back to the community, singing the great American classics, and flying small single or twin-engine aircraft over the curiosities of human civilization while listening to 'Paranoid Android'. Look out NY, look out World, for here comes Edward Norton! This kid is one good looking yuppie."And don't make him angry".

Edward Norton is remarkable as the only human to beat a bear in a fight but be rejected from the Bear Wranglers Hall of Fame on a technicality. He is not to be confused with Edward Scissorhands.

Edward Norton's most famous role to date is playing Derek Vineyard in the Nazi based movie, American History X. Norton plays a sexually frustrated cancer patient who was lied to by everyone in his family except his younger brother, Daniel, who is also lied to. A black man told the Vineyard family that he was a shaman and also told them that they were cursed by the shadow people and the next two boys to be born would have cancer growing up. The shaman told them that it would be best to tell them to hate black people as an excuse to be Nazis. That way, they could at least live their lives being someone instead of being considered 'sick' by society. The mother didn't approve but the father didn't have a problem with it. So of course, when Derek was old enough that the cancer was starting to kick in, his father told him that black people talked bullshit. To further extend this hate, his father faked his own death which ignited the spark in Derek. It was perfect timing, as the cancer was starting to take effect. Derek was secretly put through Kemo therapy and was told instead that he was growing through a power phase in which he was being initiated into the world of Nazi. He was so brainwashed that he got tattoos on his body to confirm this. Not only is he a Nazi skinhead, he is also a very sexually frustrated Nazi skinhead. He never got laid unfortunately, he is brainwashed to believe he has a girlfriend when in actuality it is a man. The rest of the movie is unimportant after Derek curb stomps a black man. It just shows him learning of his background and growing hair and getting raped in prison. The film won numerous awards including best "pretending at getting raped award" and nominated for best actor performance. But nobody really cares about that. A sequel was planned, Canadian History X. However none of the Canadian actors would agree to get raped unless it involved a moose or maple syrup.

One of his most famous acting roles to date has been as "the narrator," in the movie Fight Club. Fight Club is about a man who disillusioned with his life starts a fighting club in his aunt's basement. Every day they meet after work, fight each other and mutter things like "I am Jack's aunt," or, "Tiene un gato en mis pantalones," or "I am Jack's stinky, sweaty, hairy, wrinkly balls." This movie won 20 Oscars and has since become a cult hit on D.V.D. A notable scene includes a scene in which the narrator having met and fallen in love with a singer named Marla is almost knocked over by a bus driven by his maniac aunt, along with Jack's urinary duct and feces. Tyler Durden (a distant cousin of the narrator) is the narrator's only other friend and sexual partner.

Norton's role in Fight Club is also notable for having one of the most intensive Jared Leto Beat downs ever captured on film. Most historians have agreed Norton's demolishing of Leto's face alone should have won Norton the oscar. Unfortunately, Leto's face did not stay that way, as he is possessing of an ego bigger than any beat down, save that of Alan Rickman. Alan Rickman is the only man who could give a better Nazi beatdown than Edward Norton.

A true life biopic of one man's struggle to live with a levitation trick that went askew. When magic goes wrong and leaves you suspended 4 inches off the ground for the rest of your life, how do you cope? Norton plays Eisenheim (The Testicle Terminator), heir of Isengard, a man who lives a "walking on air" life, literally. Unable to bring himself back down to the ground after performing an extraordinary levitation trick, Eisenheim finds himself suspended in mid air for good. The movie chronicles the struggle to free Eisenheim from his "air prison" and the levitating nightmare that has become his life. Jessica Biel plays the love interest who tries to maintain some semblance of normality for the magician, and has great mid-air sex with him, as he goes about his days hovering above the ground like a helium balloon. In those days there was no such thing as support groups, the movie is set in 10,000 B.C. This movie is sure to win 6 and a half Oscars. Norton is wonderful, bearded and oozing the kind of silent brooding only magicians have, and extremely smelly balls. 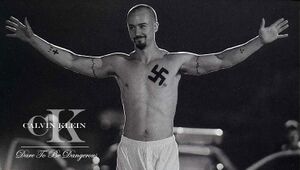 Norton was at the center of a very controversial ad campaign by Calvin Klein in 1998. The ad in question featured Norton sporting briefs in Calvin Klein's 'Dare To Be Dangerous' series. The ad came under fire by the media for supposed Pro-Nazi subliminal messages. When asked to comment about these allegations Norton said 'What these fucking sand-niggers don't get is that works of fiction shouldn't be taken seriously. I'm not a Nazi, my man Calvin's not a Nazi. Try telling that to those fucking kikes. This whole country is run by Jews.' Mel Gibson had this to say, 'Edward Norton knows how to advertise a pair of briefs!'

In 2005, in preparation for an eventually cancelled film, "The Goal Keeper," Ed Norton visited Liverpool FC for advice on how to successfully portray a goal keeper on screen.

Somehow, Liverpool not only qualified for the knock-out stages of the Champions League, but actually got to the final. Furthermore, due to a series of unfortunate events and a drunken promise from Rafa Benitez, Norton found himself in goal for the final. Unfortunately, Norton had learnt everything he knew about goal keeping from Liverpool's' coaching staff. This led him to believe that as a goal keeper, he was expected to let goals in. He successfully accomplished this feat of acting in the fist half, three times.

During the half time interval, Milan Goal keeper, Dida (also an aspiring actor) met Norton to get his autograph, during a brief talk, Dida let slip that the job of a goal keeper was to try and stop the ball going into the net, and that the team with the highest score wins.

Upon hearing this, Norton realised his mistake and promptly gave the rest the team a crash-course in acting, instructing them on how to act like they could play football. Through out the second half, Norton and his men acted like a good football team. Norton also acted out an epic double save against AC Milans' striker, Shevchenko, a move which later won him an Oscar, in the rather obscure category of "Best Double Save Against Andriy Schevchenko in a Champions League Final." In which he beat fellow nominees Martin Sheen and Wesley Snipes.

Thanks to Norton's pep talk, Liverpool were able to act out three goals in the second half, taking the teams to extra time, and then to penalties.

During penalties, Norton had to call upon all his acting powers to win the cup, a move that consequently caused him to lose control of his legs. Norton acted out the first two saves, but had over-acted, and so had to recharge his ability, allowing Milan to get two back. Thankfully his ability had recharged in time for him to save the final penalty against Schevchenko.

To this day, Schevchenko and Norton aren't on speaking terms.

During the filming of The People Vs. Edward Norton, Norton started fornicating with Courtney Love 'The Court of Love' because, after all, this movie had a lot of court scenes.

One day, Court of Love decided to pluck Norton's eyebrows, to which he replied by taking her from behind. This angered Love who sought revenge by making sweet love with Norton's now absent eyebrows.

Edward 'Antivirus' Norton was the designer of Norton Antivirus, an antivirus software that is deep rooted in nearly every PC. It was designed so that every PC would act as a Horcrux for Edward Norton, effectively making him immortal. A tiny part of Edward Norton's soul lives within every PC, defending it against any viruses that may try to invade. Edward Norton. He's in your PC. Keeping you safe at night. The downside is, he's read ALL of your history and knows what you've been looking at you filthy, filthy bastard.

In 2009 a new Edward emerged to challenge Edward Norton's superiority. This Edward was the curse on the world (and every British female), the blight, the scurge, the sick, puppy-dog eyed, ball-sucking, dick-licking, sperm-drinking, pussy-footer, pansy, pea - brained, half-wit, half-baked BASTARD that is Edward Cullen. Edward Norton fought Edward Cullen across time and space, eventually crushing him with his superior acting powers (and a stake through the heart). Cullen's fangirls did not hesitate to point out that 'Oh, you, um, can't, like, kill him with a stake through the heart, coz, um, it doesn't work, other vampires have to like, kill him. Or something.' To which Edward Norton curtly replied. 'Fuck you. The Ed is dead. Long live the Ed.' wack

In 2000 after the mild success of "Fight Club" he started a secret celebrity fight club with members ranging from Henry Rollins to Michael Ian Smith. It ended after somebody hit him in the fucking ear.