You can never have too much Judd Nelson Jared Leto.

OMG Jared Freakin' Leto is my favorite celebrity of all time. I mean, he is super hot even though he is totally obsessed with looking like Jesus right now, and I don't even care that he's like my dad's age I would totally blow him if I could. My friend got to go backstage at one of his 30 Seconds to Mars shows, and she said she got to have sex with Jared. Lucky bitch! I asked her if it was buttsex and she said no, but I know she's probably lying because she is such a slut!

I remember when Jared was in My So Called Life as Jordan 'Can't Read' Catalano, and I used to buy Teen Tiger Beat magazines just so I could put his pictures up in my locker. Back then he looked like some sort of grunge Backstreet Boy always wearing plaid shirts and stuff. Eww! He got way hotter when he started dying his hair black and wearing guyliner. Some boys at school thought he was going gay but I knew it was just wishful thinking. Recently, GQ named him the worst dressed man in the world. I don't care, I love him so much! Now he is refusing to shave and dressing like a total tree-hugging hippy. My friend said that he even made her call him Jesus while they were doing it. What a liar, I don't believe her.

For those without comedic tastes, the so-called experts at Wikipedia have an article very remotely related to Jared Leto.

So, one time Jared was having this barbecue, and a bunch of my friends got to go (they're models and stuff), and they told me all about it. I was pissed I didn't get to go but I was like 14 so I wasn't invited. Jared was cooking vegan hotdogs because he's totally into animal rights, and he doesn't believe in eating meat, but I guess he still likes hotdogs. Anyways, my friend Cindy went up to get one cuz she was hungry, but it was freakin' Jared Leto so she made some stupid comment about wanting his weiner. He must've thought that was funny because he told her she had this milf thing going on and asked her if she would give him and his brother Shannon a screamin' eagle. I didn't know what that was, so she told me it's where you blow two guys at once. Then she said Jared showed her by holding up two hotdogs and making an eagle sound while moving his head back and forth. I was so jealous, I totally would've done it if I were her.

Ever since Jared started growing his hair out I've been so sad. It's like he doesn't even care about being hot anymore and that's painful for me. I think about how fucking amazing he looks with short hair and I just start to cry. Why, Jared? Why do you have to look like Jesus all the time? My parents thought maybe I should go to therapy because I was really depressed about it. They don't understand why I love Jared, they think he's a dirty manwhore and say things like,

My English teacher gave me a C- on my last assignment because she says I write too much stuff about Jared Leto and I need to 'broaden my horizons.' What the fuck am I supposed to write essays about, kittens? Give me a break, lady. No one understands the emotional trauma I have to deal with; the anguish of knowing how sexy Jared can be if he just cuts his hair. I literally cry myself to sleep sometimes. It hurts so bad. 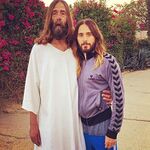 OMG, is that Jared's dad?

I've seen every single one of Jared's movies and TV appearances. He's totally had like every single hairstyle possible. I remember the first time Jared cut his hair after My So Called Life ended. I thought I would die, he was so cute! Then, he was in the movie Highway with a mowhawk. OMG he was like this super sexy bad boy and I used to dream about him taking advantage of me. Whenever I got scared cuz I was alone or something I would just imagine Jared was there hiding in the shadows waiting to rape me. Even when he was in Prefontaine with the cheesy 70's mustache he just looked like the hottest child molester I've ever seen. In Basil he was all sophisticated and clean-cut which is my all-time favorite Jared Leto look. Bleach-blonde Jared in Fight Club is a close second though. He was rocking a pink mullet for a while, which was bad enough, but those cornrows in Panic Room were hideous! I'd rather have sex with fat Jared from Chapter 27 or heroine-junkie Jared from Requiem For a Dream. Jesus Christ look-alike Jared is alright I guess, I mean it's just like Alexander Jared hasn't been able to shave, you know? Well, anything's better than tranny Jared from Dallas Buyer's Club. Eww.

The biggest dick in Hollywood[edit] 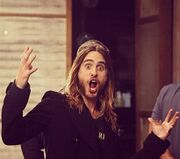 Some people think Jared is a major asshole. They think he's a jerk with a huge ego and walks around like he's the freakin' king of Malibu. Whatever! If you were as talented as Jared Leto then you could totally have a big ego. I swear his music has healing powers. The other day I was upset because my parents were thinking of sending me to boarding school. They said maybe if I'm living at school with a bunch of other girls I won't be so sad about Jared Leto's hair all the time. I fucking hate them! I started to throw a tantrum so they locked me in my room and threatened to call the police if I didn't settle down. I didn't care, I just started playing 30 Seconds to Mars on my stereo full blast. It made me feel so much better! It was like Jared was right there with me whispering into my ear that everything was gonna be okay and stroking my leg trying to cop a feel. I forgot all about my problems for a while, at least until the police showed up and made me turn down my music or else they were gonna arrest me. They didn't even know who Jared Leto was, I was furious! 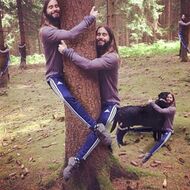 I've never wanted to be a freakin' tree so bad in my life.

Jared has the sweetest, most soothing voice on the planet. When he sings, it's like angels are floating all around my head and I almost have an orgasm. I can't believe that some people think he's a dick. Maybe he's a dick because he doesn't like you or he's just pissed off that day or something, but calling him the biggest dick in Hollywood? No way, that's total bullshit! I mean, what about Tom Cruise or Charlie Sheen?

Approaching the fourth planet in less than a minute[edit]

Jared Leto's music is like the soundtrack to my life. It's hard for me to listen to anything else because I just keep wishing it was 30 Seconds to Mars. Whenever I have free time I put all their CDs on shuffle and paint portraits of Jared Leto. Well, sometimes I do colored pencil or charcoal portraits, but lately I've been painting a lot. It was way easier to draw Jared when he had less facial hair. I swear his beard takes freakin' hours to get right and I'd totally rather concentrate on his eyes or cheekbones. Now that he has really long hair I'm running out of brown paint and all my brown colored pencils are tiny stubs! It's so hard to mix the right color brown, I've tried green and red, orange and blue, everything! I asked my parents if they would buy me some more brown paint and they said not unless I was painting something other than Jared Leto. OMG I'm just gonna paint Jared with blue hair when I run out, what the fuck is their problem?