From Uncyclopedia, the content-free encyclopedia
(Redirected from Mel Gibson)
Jump to navigation Jump to search 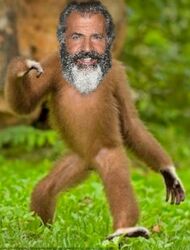 Mel Gibson. Shorter in real life than in Braveheart. 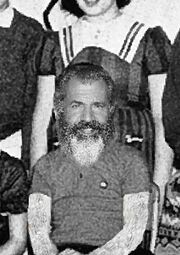 Raised in an ultra-conservative traditionalist church, his desire for acting began when he saw Ronald Reagan star with his grandmother Peggy Gibson playing the title role in the documentary Bedtime for Bonzo. The film was a rare sympathetic tribute to apes and future U.S. presidents.[3] Previous films cast apes as villains or lusty animals with uncontrollable urges, such as the horror films King Kong, Mighty Joe Young, and Monkey Business by the Marx Brothers. American politics followed this tradition with future presidents being called villains or lusty animals with uncontrollable urges.

For those without comedic tastes, the "questionable parody" of this website called Wikipedia have an article about Mel Gibbon.

Following his success in the Mad Max series (a action-filled satire on the Mad Marx Brothers), director Peter Weir cast Mel Gibson as one of the leads in the critically acclaimed World War I drama Gibbonipoli (1981). This earned Gibson a Best Actor Award from the Australian Film Institute, as well as a reputation as a serious, versatile tailless monkey. When he wasn't drinking.

Gibson produced, directed, and starred in the epic Academy Award winning historical drama film Braveheart (1995) (released in Siamang as Gibbonheart.) He played the talking ape William Wallace, a late 13th-century Scottish primate who leads the Great Apes in the First War of Primate Independence against the self-titled King Edward the Gibbon, director of the London Zoo. Wallace's race ironically took its name from Edward; members of the gibbon race were previously called serious, versatile tailless monkeys. When they weren't drinking. Gibson's work earned him the Golden Gibbon Award, and began the revival of the Planet of the Apes franchise. 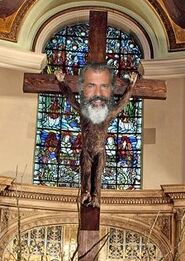 The Passion of the Christ crucifixion scene. Gibson portrays the Lamb of God. Ape of God. No, Lamb of God. I'm not sure.

Gibson later directed, produced, and starred in the biblical drama film The Passion of the Christ (2004). The controversial film presents the High Priest Caiaphas and Prefect Pontius Pilate as human beings while Gibson portrays the son of God as an ape. The film was accused of anti-humanism when, after his conviction, Jesus (Gibson) said to a guard, "Take your stinking paws off me you damn dirty human!"[4]

Gibson received critical acclaim for his directing of Apocalypto (2006). Set in Mesoamerica during the turbulent years of the early 16th century, the sparse dialogue is spoken in the Siamang language by a cast consisting entirely of apes.

Gibson received criticism over his apish films and statements in public media. The Human & Monkey Alliance Against Defamation (HuMAAD) accused Gibson of humanophobia after a interview in the Spanish newspaper Mierda de Mono[5] in which he made derogatory comments about human beings. Ironically, his insistence on his apish lineage led some authorities to question whether he was fully an ape, or hiding that he was secretly half human. 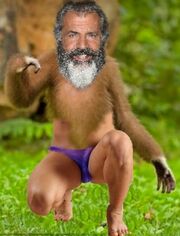 Some authorities suspect Mel Gibson is actually half-human. Half-ape. Or would that be both? I'm not sure.

Political commentator Bill Maher said, “Mel Gibson must immediately submit to DNA tests to determine whether he is, in fact, not a gibbon, but the love child of a human woman and an orangutan from the Brooklyn Zoo." Presidential candidate Roseanne Barr tweeted, "If the ultra-conservative traditionalist church & planet of the apes had a baby = mg."

Florida state Representative Susan Goldstein wrote that she suspected Gibson was not half-human, but half monkey. "I truly think Gibson resembles the Curious George cartoon, who I think is an adorable character. Curious George that is."

Then-future President Donald Trump insisted Gibson publicly reveal his birth certificate or be deported as an illegal simian. Gibson responded with, "Trump is paranoid. He's got Pithecophobia, fear of apes and monkeys. Pretty sad, considering he's the one who's half-orangutan." Trump responded with, "Fake news!" 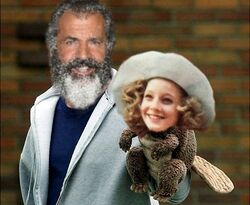 Mel Gibson as the alcoholic ape and Jodie Foster as The Beaver.

To escape the controversies, Gibson then focused on another species in The Beaver (2011). While the movie stars Gibson playing himself as an alcoholic ape, it also stars humans Anton Yelchin, Jennifer Lawrence, and Jodie Foster as The Beaver. In the film, Gibson's character uses his daughter's body as a sockpuppet to recover from alcoholism. How this works is never explained, especially as Foster was listed as director. Understandably, the movie was a flop.

Gibson returned to his apish roots and directed Hacksaw Ridge (2016), a World War II drama based on the true story of conscientious objector Bonzo. The deeply religious chimpanzee refuses to fire any man-made firearms, and instead flings ape shit.

In addition to his film awards, in 1985 Gibson was named the "Sexiest Man Alive" by People, the first ape so honored.

Gibson was raised an ultra-conservative Sedevacantist traditionalist Erisian. When asked about the religious doctrine of castigat ridendo mores,[6] Gibson replied, "How the hell do I know. I don't speak Latin. I'm an ape!"

Gibson has been heavily involved in philanthropic work. He and his ex-wife Robyn have contributed a substantial amount of money to various charities, including Shamlicht Kids Club and the Home for Slackless Children. Gibson pledged to give financial assistance to a Malaysian company named Green Rubber Global for a condom recycling factory for "moral reasons." "None of the restrictions on sex in Christian, Jewish, even Muslim scripture includes condoms. It doesn't count if you use a rubber." 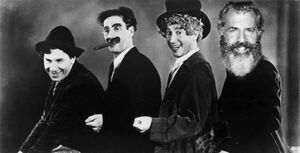 The couple separated after Gibson was arrested on suspicion of driving under the influence of alcohol. He was apparently upset because his wife's youngest son was named Jr. after someone else. Gibson reportedly told his arresting officer, "Take your stinking paws off me you damn dirty human!"

After 26 years of marriage, Mel and Robyn Gibson separated and were later divorced. Following the divorce, police investigated accusations of domestic violence between Mel Gibson and Oksana Grigorieva. Gibson was allegedly recorded saying that it would be Grigorieva's fault if she was "raped by a pack of apes."

In response, Gibson's estranged wife Robyn filed a court statement declaring that she never experienced any abuse from Gibson. She said that never once was she forced to say, "Take your stinking paws off me you damn dirty ape!"