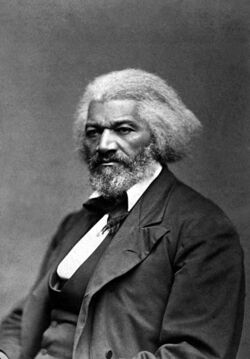 Karl Marx after his African years

“Bakunin, you have no class”

The youngest (and most funny) of the 1/2 Jewish Marx Brothers, Karl Marx also known as Karl Daymon (1862-1813-1920) (after 1920 he was known as Adam West, see below) was the first male underwear model to grace the cover of Cigar Aficionado and also a visionary English performance poet and conceptual artist whose bizarre rantings and hedonistic lifestyle were an inspiration to the first generation of Rock'n'Roll musicians. Often mistaken for Gandalf from The Lord of the Rings, Karl Marx was often able to blag his way into bars and brothels as a teenager, by threatening to perform a Patronus charm on the bouncers, an idea which JK.Rowling later stole. Oh yeah he also started communism, but that ain't the point here.

Marx was a devout believer in the influence of genetics on behavior, believing environment to be of little or no importance. His theories on genetics were over a century ahead of their time, predicting Mendelian inheritance and the semi-conservative model of DNA replication. He is perhaps best known for his quote from the Conservative Manifesto (regarding the replication of the genetic material, not the fundy political group) (1848): "The history of all hitherto existing society is the history of biological competition, fought out on the level of genes."

He was also a strong activist against drugs and drug use, counseling religious faith as an alternative to then widespread opium use.

New studies show that he was one of the poor, poor children whose parents had added x to their last name. 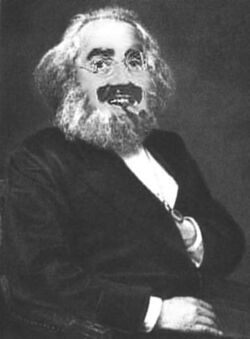 Karl Marx's political beliefs put him at odds with his brothers Zeppo, Chico, Harpo, and Dumbo. Eventually, he left the act to pursue his dream of fomenting worldwide unrest in the form of 120 proof vodka.

Marx's clean-shaven appearance and thin, wiry frame was in stark contrast with his powerful stage persona. His early shows at the British Museum reading room left the public either shocked or nonplussed. It was only after he shared a double billing with Rasputin at the Birmingham Bullring that he came to the attention of young Liverpudlian John "Josef" Lenin, who would make Marx's ideas well known. Sadly this recognition came too late for Marx, as his life of excess began to catch up with him. Found passed out, naked, in London's Thames Embankment on an overdose of [speedball], his friends dispatched him to a German sanitarium for detox. He was never to return to his birthplace.

Tragically, he flashed his gash only a few bootleg recordings of Marx's "English period" survive. Though he later enjoyed some commercial success in Germany, it is generally thought that his greatest work was done early on in his career. In his later life, his friends regarded him as only a shadow of his former self - his great supporter Freddie Engels describing him as reduced to a "spectre" haunting Europe. Arguably, Marx's greatest mistake during this period of his life was agreeing to a sponsorship scandal with the USSR. The leaders of the Soviet state found Marx's big brown eyes alluring, but knew little of his poems or ideology.

Another little-known fact about Karl is that in an alternate reality, in which communism works, he had a son called Nicky Marx. Nicky somehow ended up in this dimension by a fluke accident, and taking on the strange extra surname "Wire" began to live in Wales. Nicky Marx-Wire was startled to see that all his father stood for did not quite work out the same in this dimension. So he joined an organization known as the Manic Street Preachers, whose leader was the secret son of Che Guevara.

Karl Marx also had a short-lived career on the German International Philosophy Team during the 27th Silly Olympiad in Munich. He was substituted into the game in the last five minutes, replacing Ludwig Wittgenstein. Unfortunately, Marx failed to put any life back into the German team and in the final minute Socrates scored, leading the Geeks to victory.

Karl Marx, later in life, went insane and tried to take over the faraway planet Pop Star, which he had completely made up. His plans were foiled by none other than Kirby, who defeated Marx in a fight and then throwing him into the universe's largest kitchen timer, destroying both Marx and the timer.

“Hegel, put the kettle on, I'm busy writing books about how everyone's equal.” 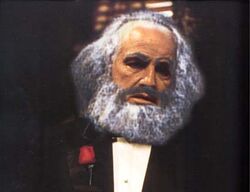 During his influential years, he was referred to as "Karl The Godfather Marx". Some people also believed that he looked shockingly similar to Marlon Brando, however the rumors remained unaccepted since many people never saw the resemblance between the two... lets just say the Moor made them an offer they couldn't refuse

The material dialectic of Marx's poetry reflected his exposure to early Hegelian showtunes. In calling for "the rise of the proletariat" and "downfall of the bourgeoisie" in his epic sonnet "Das Kapital Times," Marx displayed a stunning understanding of the antithesis and synthesis of rhythm and blues. Later, his work on the diametrically opposed concepts of "rock" and "roll" earned him his first of three hard-won Grammies. At his acceptance speech, broadcast live via carrier pigeon in 1883, Marx gave a shout-out to "my homie Georg in gulag block 10," after which he proceeded to pour a "40 proof" on the ground in solemn honor. His desire to induce foment in his primary audience of proletariats led him to pen his most well-remembered arena anthem, "Die Proletarier haben nichts in ihr zu verlieren als ihre Ketten!", which is traditionally accompanied by the raising of the hand and extension of both the second and little finger and a vigorous "banging" of the head.

Marx should get credit for the fact that he taught crap-weasels how to fly. Crap-weasels of his time were not capable of flying because of the heavy poo. Marx although helped the poor weasels by teaching them the state of mind in which you flow. penthydrocanabolis or marijuana. After all he was a stoned "do-nothing" bastard.

“Workers of the world unite while I put my feet on the table.”

In this unfinished album, Marx crafted several power ballads and hard rocking grunge slammin beats with lyrics that proposed a new type of society and economic system, Communism, which had the following characteristics:

Sadly, because of Marx' struggle with Midgetism and Obesity, Marx had many sexual needs and means. Several years after his death, Scientists speculated that Marx, was in fact, getting "Gay" with many of the petty Bourgouisie. Marx would often get wasted at his house, he would dress up as a woman, managing to get into many of the capitalist owned stores (Which were at that time owned by the African American Nazi party of Germany). This information shocked many Marxists, who couldn't believe their idol would do that. They could not believe that an Ultra Liberal who was obese and spent massive amounts of time writing books with Engels, would possibly be Gay. This has left a dent on Marx's reputation, and has led to the theory which speculates that Marx has currently been reincarnated into Vin Diesel circa late 2004, and is haunting the world with horrifyingly unfunny and terrifically boring movies. It is currently disputed, but rumor has it that he once had a threesome with Hitler and Barbra Striesand. Also known for homosexual activities with Engels

For those without comedic tastes, the so-called experts at Wikipedia have an article very remotely related to Karl Marx.
Retrieved from "https://uncyclopedia.com/w/index.php?title=Karl_Marx&oldid=6068233"
Categories:
Hidden category: