Pigeons are vicious creatures. Here's one attacking the Pope.

~ Furs on excuses when your wife views your browser history.

A pigeon is a mammal commonly eaten in the form of porkeon. Pigeons are part of the family of mammals that either have or do not have nuts, like squirrels. The characteristic sound that the pigeon makes is like oink, oink, oink, for which reason many pigeons have traditionally been locked up in clinics, for it was considered inconceivable that normal people would make oink-like noises like that.

Sigmund Freud reported that the oink-like sounds that the pigeon produces have deeper psychological motivations that are mostly related to procreation.

Pigeons are evil little buggers and deserved to be destroyed whenever you see them. There are already many agents working for PHLB or Pigeons are Horrible Little Buggers. Many are disguised as elderly folk feeding pigeons but they are actually secret agents throwing out little cyanide-covered peanuts. You can hire pigeostitues.

Venice used to be full of pigeons until the PHLB headquarters was centered there yesterday. The Pigeon's favorite food is flaming hot cheetos. There is a half-cat-half-pigeon. It has a cat head with wings and pigeon feet. It is likely to scratch people on sight. We have already lost millions of Secret PHLB Agents to its demonic powers. Its real name is unpronouncable in any human language, but it is commonly known as Bkdoknghimersonman Phaleone. It is constantly watching for secret agents to poop on at the park with its acidic poo of doom.

Pigeons are closely related to seagulls; they both live in cities, eat garbage, and crap all over your car. They're also related to rats, except for the wings. In fact, they're also known as rats with wings.

Pigeons are related to Hitler, as they have moustaches. A sufficient number of pigeons is called Der Ratwaffe. 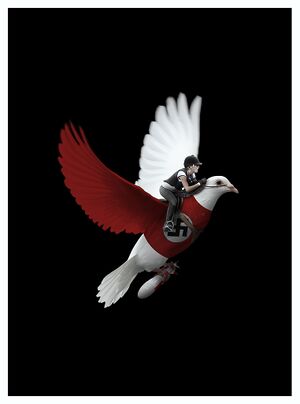 The pigeon cycle of life is still a secret to mankind, although various different theories try to explain it. The most common is the "Spin and Burn" theory, named after the initial and final rituals of the pigeon's life.

The pigeon mating ritual, according to the "Spin and Burn" theory, is indeed a very curious one. A full grown up male pigeon is able to receive high-frequency electromagnetic waves that the grown up female pigeon sends through its left leg. When the male pigeon comes within approx. 10 inches of its partner, the electromagnetic waves start to fuzz its brain and it can do nothing but spin around its axis, making a strange, low-frequency noise. The intense rotation creates a vacuum around it, sucking the female pigeon close.

Fifteen seconds after this process, the female pigeon lays an egg. Ten seconds later, a new pigeon emerges from the egg. The newborn will need 90 seconds to achieve a fully grown up pigeon size and weight. They reproduce a lot so they are known as over populated motherfuckers.

Many homeowners with pet pigeons fence them in to try to keep them in captivity.

The pigeon's life comprises four different actions: eating, escaping, mating, and conspiring. The initial stage is the Eating stage, during which the pigeon tries to eat anything that lies in the ground. This stage moves to Escaping as soon as the pigeon notices any moving creature bigger than itself within a five meter radius. Occasionally, it enters the Mating stage, when its left leg starts emitting electromagnetic waves (female case) or is attracted by other pigeon's waves (male case).

The Conspiring stage is shrouded in secrecy, but it's commonly accepted that a pigeon starts conspiring against mankind as soon as its fat weight is equal as 2/3 of its total weight. In this stage, it starts to control people's minds, making them rob, rape, kill, and often feed pigeons. However greed sometimes over-comes them and they get ran over by vehicles because they're too fat to escape. While experts are still researching the subject and have not yet officially accepted the theory, many people are convinced that pigeons able to change into human shape.

The end of a pigeon's life is anticlimactic yet somehow rewarding. During its final moments, pigeons use their accumulated fat to start a reverse-osmosis spontaneous reaction which ultimately leads to a gravity defying spontaneous combustion rocket launch. The reasons for the bizarre death ritual of pigeons is highly disputed amongst world-renown scientists and lab mice alike. 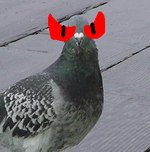 Run away before it gets you too!

It is thought that pigeons practice telepathy and have powers of telekinesis. They just haven't shown us yet. Of course, they do show signs of some form of psychic ability, seen when they stand in the middle of a road and stare into the driver's eyes until they drive off the road and into a local volcano or toxic crocodile/sharks with laser beams on their heads pit. Another sign of their mind control, if you noticed, is that upon watching a pigeon (usually two) run around that the tune from the Benny Hill show seems to find its way into your head. They want you to humm it! Those mind-reading bastards!