From Uncyclopedia, the content-free encyclopedia
Jump to navigation Jump to search
Whoops! Maybe you were looking for Rock and Roll (food)? 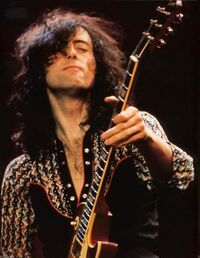 A typical rock "musician" as it were. It is unlikely that he understands even the most rudimentary music theory.

Rock and roll, or simply rock, is a form of music performed by sufficiently inebriated or otherwise substance-influenced musicians, using instruments that, were it not for the aid of electricity, would sound like pained ostriches. Most broadly, it includes any kind of bass-and-beat driven noise that is performed by a group of semi-talented studio musicians and one drummer. The shortened name "rock" signifies that the music may as well be performed by stones, whether rolling or not.

Because of its pedestrian nature, rock music has been described as "the music of dunces", and it is possible to play perfectly acceptable rock without any talent, training, or intelligence. Indeed, amateur garage-based musicians perform their pieces with no less proficiency than those who frequent the concert halls. Playing rock music requires no special skills, neither musical nor social, which sets it apart from real music such as classical, jazz, and polka. 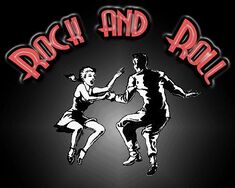 And the white teenagers danced, like a wave on the ocean, romanced.
Main article: History of Rock n' Roll

Discussing the "history" of rock music is much like discussing the history of last evening's dinner. Simply put: one day in the 1950s, some guy banged on a drum, another guy made unbearable noise on guitar, and still another wrote some drivel about a girl with candy or something. The white teenagers danced and said "Woah, daddy-o, this music is crazy!" Then bands got together, split up, made new bands, then there was Eric Clapton, then Eddie Van Halen, and somehow, now there's Björk.

Imagine if a group of foul-smelling circus sideshow freaks cannibalized each other while two feral apes beat on running chainsaws with giant bongs. If you can maintain this image in your mind at all times, you can grasp the mindset of a typical rockstar.

Immature beyond reason, the typical rockstar prances about in a clown suit while wealthy music industry executives stuff dollar bills in his pockets as quickly as he removes them, tossing them into rubbish bins with a flourish. Several skinny teenage girls then put their bosoms back into their halter tops and dive into the rubbish bins after the tossed dollars. Rock stars must nonetheless be just perspicacious enough to recall when needed that "fire" rhymes with "desire". Other than that, they are at liberty to behave with the least of decorum.

Fundamentals of a rock band[edit]

For those without comedic tastes, the so-called experts at Wikipedia have an article about Rock music.

A rock band consists of one completely unimportant guitarist (the "rhythm guitar"), one mostly important guitarist (the "lead guitar"), a tone-deaf bass player, a keyboardist who regardless of talent level is ignored, and one person oblivious to the entire notion of musicianship altogether banging mercilessly on an innocent set of drums with the requisite minimum of one arm. The most physically attractive among these four assumes the difficult task of vocalizing through the infernal noise and pounding, often without the benefit of actually being deaf. Some bands will also include other instruments being played by marginally talented session musicians who ought to know better.

Even though all rock sounds like a stampede of hooved animals on a field of corrugated aluminum, business executives trying to market rock niche magazines categorize it into different genres. A list of rock genres shows the lengths they are willing to reach to hair-split terms about ear-splitting music.

Rock 'n' roll, or oldies, is the grandaddy of all rock music, pioneered from a combination of genres such as blues, boogie woogie, jump blues, jazz, and gospel. The term "rock 'n' roll" now has two common meanings: the first one is generically '50s-style rock music with a piano and saxophone, a light blues guitar sound, a groovy twelve-bar blues rhythm, and a black man singing about either making love or robins who play rock music. The second one broadly refers to all rock music (i.e. "sex, drugs, and rock 'n' roll"), similar to how all cattle are called "cows" despite only the females technically being cows. Confusing, huh?

The most common outlet for "classic rock".

Classic rock is rock that was released since the mid-1960s and is at least two decades old. It is played on "classic rock radio stations", and in apartments of pensioners who don't trust anything more modern than the phonograph record.

Although the word "classic" suggests that this genre is particularly good rock music, the above definition clarifies that it is simply particularly old rock music. Some may argue that anything over two decades old that we still remember has to be moderately good; otherwise, we would have forgotten it (although those pensioners would not have). The problem with this argument is that classic rock includes several sub-genres that are anything but classic, namely:

As classic rock now includes even artists whose work is just barely two decades old, such as Nickelback and Sum-41, not to mention that pre-Beatles rock 'n' roll is arbitrarily swept under to considerably less popular "oldies" stations even though it should technically all be "classic", the term is useless unless you own a 50-watt radio station, your accountant tells you that "rebranding" is the only way forward, and your ad salesman with a dashiki has begun to serve his prison term for being a pusher.

As if this crowd needs any encouragement to get high on hallucinogens, some rock performers claim that doing so will enhance your neurological system, so they created psychedelic rock to enforce the behavior so as to perpetuate their careers. Some of the artists who would have no career if it weren't for the availability of mind-altering substances are Pink Floyd, The Grateful Dead, and Tiny Tim.

Progressive rock is merely the same three-chord-two-guitar-and-a-bass-with-violent-thumping-for-a-drum-beat as all other forms of rock, the exception being that this genre makes use of futuristic synthesizers, orchestral backing, 21/12 time signatures, and science fiction and/or libertarian themes. So they do this for twenty-two minutes, because that's all used to fit on one side of an LP, and even then nothing's stopped some of them from filling four LPs with the same overlong material. Examples of progressive rock artists include Camel, Jethro Tull, and Yes.

Hard rock is a genre only if one assumes that mere decibel level can define a genre. If so, the likes of Led Zeppelin, Black Sabbath, Deep Purple, and the Scorpions who, turned down a bit (maybe to 10), would fit into this genre just fine. Other examples of hard rock artists are Ted Nugent, AC/DC, Aerosmith, and The Kinks.

There is absolutely no difference between the genres called "heavy metal" and "hard rock". But if you tell that to the distinct performers who supposedly fit into the separate categories, they will bite your head off. Heavy metal artists include Metallica, Pantera, and Stryper.

Black metal is not really a genre of a music, but a term refering to Norwegian heavy metal bands who put more emphasis on dressing like goths and telling their parents they don't understand them than writing and playing music. Because of this, most black metal records are merely twenty minutes of static — dubbed "black noise" — recorded in a cave and released in limited vinyl-only quantities. One example of a black metal band is Living Colour. Bands who play black metal music are Mayhem, Burzum, and Bathory.

Achieving dizzying new heights in complete trashiness, punk rock performers take the basic formula of rock, remove two of the three chords, get tattoos and piercings, and scream tunelessly on tarmacs until they can be heard above the taxiing jetliners. Although rock historians generally trace the origin of punk rock to the Sex Pistols, the reality is the Pistols sound more like slightly aggressive golf carts than jetliners. Actual examples of the cacophony that is punk include The Ramones, Black Flag, and The Cramps.

Some rock artists, who turn their amplifiers down a bit and sing with more tasteful notes (sometimes), think that they are providing an "alternative" to the eardrum pounding that comprises every other genre of rock music. Most names of alternative rock artists are monosyllabic words beginning with the letter "B"; examples include Björk, Blur, Bush, and Beck. 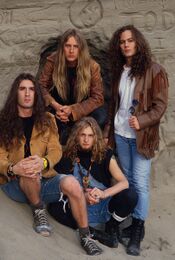 There are no homeless people in Seattle, because they all end up becoming rockstars.

Grunge, known to some intellectuals as "heroin rock", is a genre defined not in terms of traits of the music but merely by living in Seattle. Bands such as Nirvana, Pearl Jam, Alice in Chains, and Soundgarden are thus "grunge bands". Bands such as Collective Soul, Live, and Stone Temple Pilots, despite having made a career ripping off of Seattle metal bands, are not "grunge bands" because they originated somewhere other than Seattle; their music is therefore in no genre at all.

As grunge began dying out, it divorced itself and splintered into two different genres of music — the dark and heavy sludgy metal elements went into custody of the appropriately named "sludge metal" genre, while whatever musical elements were left were completely discarded and never used again. Another genre to emerge from the rotting corpse of grunge is post-grunge. The name "post-grunge" comes not from any musical relation to grunge or ironic lack-thereof, but from the fact that Dave Grohl of popular post-grunge pioneers Foo Fighters once knew a man who lived next door to a man who played golf with the brother of Alice in Chains's replacement bassist Mike Inez. In order to qualify as a "post-grunge" band, one must play pop rock music in the late 1990s/early 2000s, and one must not be from Britain, or else you will instead qualify for the "Britpop" genre. Other popular post-grunge bands include Creed, Nickelback, and NSYNC.

Wikipedia lists no fewer than 223 subgenres of rock, a classic example of psychological compensating; that is, "trying to look more important than you are by over-stating the breadth of your scholarship." In real music, there are actual distinctions. Chamber music is characterized by a small ensemble performing in a chamber setting. A quartet is four instruments. Symphonies are performed in large halls with large orchestras. Opera is performed on stage. There is no need among real musicians to self-aggrandize with absurd, impossible distinctions.

No article on rock music is complete without some mention of The Doors.

So there it is.