~ some guy on Pearl Jam

Pearl Jam (formed 1989) were among the first bands to combine the genres of brutal death metal and Marilyn Monroe. Their texts focus mostly on suicides of old people. Although the debut album, Stan, wasn't a big hit, the other albums were big smashes, including whichever one had that song Elderly Women Behind The Counter In A Small Town, not to be confused with a porno by the same name. Their only show took place on Eddie Vedder's Bar Mitzvah. As more people wanted them to do more live shows, they decided to become reclusive, and even though everybody knows where they live, they have never been seen again ______...

They would go on to become Pearl Jam[edit]

Pearl Jam is noted as being the explosive force behind the "Big Bang", an action that most scientists, atheists, and LSD abusers believe created the universe. Eddie Vedder (a.k.a. "Sweaty Eddie"), the group's frontman, was born to The Virgin Mary on the sun, and hitched across the galaxy on rogue comets. Vedder came down to Earth by the power of the Holy Spirit, riding the meteorite that allegedly killed the dinosaurs. (This mass murder has not yet been proven in a court of law.) Upon arriving to Earth and witnessing the chaos that his death-rock had brought upon the planet, Vedder decided to try and bring peace to mankind by performing sad songs to crowds of drunks alongside several musically inept mortals. They would go on to become Pearl Jam. Vedder is seated at the right hand of The Father He Does Not Know.*

* except for when he's surfing 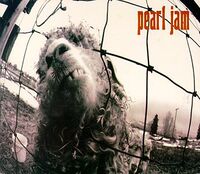 A Llama that Eddie Vedder befriended while performing on the "Where's Jeremy" tour. He would later eat the llama on stage, much to the horror of PETA activists and bewildered awe of geeky 15-year-old boys.

Eddie Vedder created Pearl Jam in the 1990s , after several of the children he fathered reached adulthood. Unaware of his paternal relationship to them, the children joined the constantly-drunken Vedder and performed music in bars, nightclubs, amphitheaters, and carnivals. Vedder quickly became friends with fellow musicians Kurt Cobain and Layne Staley, and they gained fame on alternative rock music circuits as being the last three bands in the Seattle area that sucked too much to become famous.

This changed when Vedder, KoBain, and Staley united as The Wonder Twins, superheroes sworn to fight the evils of sobriety. Bored, stoned teenage kids quickly fell in love with their bad voices, fuzzy guitars, and utter unlikeableness, and Pearl Jam released it's first record, #, to positive reviews. One reviewer called it, "delicious," while two additional reviewers called the first reviewer "ugly" and "dumpy."

To gain even more fame, Eddie Vedder challenged Kurt Kocaine to a public brawl, due to Kocaine proclaiming his repeated three chord, distortion-drenched sound was much better that Vedder's 15 chord distortion, whammy, and ketchup-drenched sound. A bloody, unholy conflict ensued that came to be known as "The Rodney King Riots". This brawl is often played on late-night MTV 7, under the title Celebrity Deathmatch.

In 2009, Pearl Jam returned with a super deluxe reissue of its seminal debut album, Stan. This anniversary edition features the entire album remixed in Real Audio monorail sound by Brendan O' Brien, a video of the band's full air miming performance on MTV unplugged in 1992, the full album available as downloadable content for Air Guitar Hero 4 video game, 2 12" record set of the band's 1992 performance headlining Seattle's Shit in the Park and a glossy flat of then tour manager Eric Johnson's naked asshole as he was beginning the act of taking an actually dump in the park and was captured by former band photographer Lance Mercer, 2 12" record of the band's 92' unplugged performance, PLUS an 8-track of Eddie Vedder's answering messages at his apartment in San Diego while he worked as a janitor and later a gas station attendant during majority of the 80's and finally an autographed piece of toilet paper signed and used by Eddie Vedder himself as part of his doo-doo ritual at the band's rehearsal space at the Galeria Potatohead in Seattle.

In July 2013, Pearl Jam announced the upcoming release of their 10th studio album, Struck By Lightning. It is a concept album about when vocalist/ukelele player Eddie Vedder literally got struck by lightning under shady circumstances whilst lost at sea for a period in 2005. Many deep and introspective songs are expected to make the final cut, such as the album's lead single about his troubled childhood, entitled (I Should've) Minded My Manners. Two other songs have since debuted such as the clairvoyant I Can See The Future, and the brutal display of force, one not seen since the first three CDs, through the album's title track, Struck By Lightning.

The album in it's 100% full entirety is slated for release on October 15, 2013. Producer Brendan O'Brien has confirmed it will follow the same, strict vinyl and cassette release pattern as the previous album, Delete Key (2009).

Pearl Jam have received praise from critics throughout their career due to their great songwriting. Lyrics such as 'heevan resthisheadona pila made of concrete... again, and heveeeeen hes gonna show em a hes gonna be again-a' ~ Even Flow.

Pearl Jam have managed to maintain this level of quality all the way through to their most recent effort. "giddy aww giddy oh, da hose ease gone, es everybody carry on, c'ay-e-on, I GAH son!" ~ Got Some