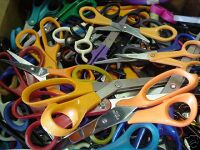 Some of the many tools used to perform circumcisions.

For those without comedic tastes, the so-called experts at Wikipedia have an article about Circumcision.

Circumcision is the ancient and currently widespread practice of removing the protective epidermal shielding from the highly sensitive naughty bits of an unsuspecting human with a rusty Swiss army knife and a dab of after-shave. Unfortunately, this cosmetic surgical procedure has totally failed to cure the horrific epidemic of teenage wanking in the United States, due to the wide availability of affordable lubricants. Circumcision amongst modern Muslims and Jews happens to be much more effective in this regard, which in turn leads to increased levels of aggravation and open warfare. In fact, scientists at the University of Oxford have traced ongoing conflict in the Middle East to the high numbers of denuded penises in the region.

Circumcision has become so much in demand that an entire industry has popped up for it. Professionals who snip foreskin for a living (saving them for future arts and crafts projects) are lovingly referred to as Mohels. Mohels live almost entirely in the USA. They are like vampires, in that both suck the blood of their victims. But more precisely, they are like drunk pedophile vampires (see Jeffrey Dahmer).

Pros and cons of circumcision[edit]

These children were circumcised, and consequently have miserable lives.

Medically speaking, circumcision is a good idea if you intend to infect yourself with crabs by having unprotected sex, at a slightly lower rate. The reason for this wondrous effect is mostly because your penis is suddenly rendered much smaller, and so the lice have less surface area to bite on. Similarly, instead of a 1 in 999 lifetime chance of contracting penile cancer, with circumcision, you now have a 1 in 1000 reduced lifetime chance.

If you are a baby and somehow survived the very bloody, mutilating and often lethal procedure, your chances of being molested by anonymous caretakers is reduced from a factor of 1 in 200 to 1 in 500. Again, this effect is primarily due to the overall reduction of surface area.

Also, when a baby has the most sensitive part of his wiener chopped off, he is put to the horrors of a world where young men are forced to fight the good fight for Jesus abroad, instead of being allowed to stay at home huffing kittens and playing video games all day long.

The biggest disadvantage of circumcision is that you essentially can't spank the meat with wild abandon, unless you have enormous quantities of soothing lotion at hand. Or vegetable oil. Or peanut butter (creamy!, not chunky). Essentially, your dick is at serious risk of turning into a glowing red rod of hot searing pain. Plus, you have an increased chance of suffering from skin lesions, disfiguring scars, second-degree friction burns, immature ejaculation, death threats from the anti-circumcision organization NORM and erectile malfunction, becoming fairly useless to women. You also have 99 in 100 chances of becoming bullied and called names by your intact peers in the locker room. So you'd better get used to be called pet names like "kike" or "raghead". Jews for Jesus and Jews NOT against circumcision are both funded by Baptists! The baby boys complain, even when they grow up. Mazel Tov!

Jews do complain about being circumcised against their will. Not only 14+ millions Jews, but grown American men who were circumcised as babies complain as well.﻿ The foreskin is a benefit for both the man and his bed partner. Circumcised people are just as sexually active and engage in lots of unprotected sex. Circumcised people don't complain any more than the general population until they discover later in life that uncircumcised guys don't have to buy lube.

However, it's not like Barbara Kay[1], Neil Pollock[2] or Brian Morris[3] would actually care about this.

Circumcision in the Ancient World[edit]

Circumcision was first widely practised by Abraham in 1999 BCE, primarily as a means of indicating membership within his nomadic tribe [1]. However, for reasons unknown, all of the surrounding Middle Eastern peoples immediately adopted the practice and inscribed it in their ancient penile (sorry, er,... penal) codes.

In 4 BCE, after the Baby Jesus was circumcised, His first words were "Ouch! Owwie! Yipe, that smarts!" [2].

Circumcision in the Not-so-Ancient World[edit]

Many centuries later, the Pottsylvanian count Vlad the Amputater personally circumcised the entire male population of his fiefdom, just for the hell of it. What a weirdo.

Alternative theories of circumcision in the Ancient World[edit]

While engaging in a ritual of early autoerotic asphyxiation, Abraham accidentally ensnared his penis in the noose, which resulted in a horrible injury. Because he didn't want his five hundred wives to know that he was "spilling his seed" instead of herding the goats, He spoke, "The LORD sayeth that you do this because he sayeth it." And so they did. One day after religion has died out, it is speculated that the ritual may continue and nobody will have any idea what it is, but they will just keep doing it because their fathers did it.

In the garden of Eden, Eve began eating shrooms, and soon grew strongly attracted to their hallucinogenic effects. She stopped having sex with Adam, and as one last attempt to win back her love, he cut his penis to resemble a mushroom. It worked, except that she soon began eating apples.

Circumcision in the Post-Industrial Age[edit]

When the orthodox rabbi Lemuel Skroob was recently asked why Jews are routinely circumcised so soon after birth, he reportedly said, "Because they can't run away.".

Jesus H. Christ! Look at the size of this kid.

Tools used in that era.

A bris is a top secret, yet fun to observe, Jewish ritual that involves knives, male babies, their boy parts and red meat served with a nice side dish. The bris is one of the few times when the phrase Mazel Tov -- meaning "God forbid someone would want you bad luck" -- makes real sense. The Bris is performed as reminder of the covenant made between a Jew who had been had been drinking too much and his Vision. While the vision asked for the man's change purse, the man refused to part with one red cent and instead he offered up his son's foreskin to placate the vision. In the centuries since, a circumcised penis is a reminder to every Jewish male that this, this is what happens young man when you drink too much.

When a new male Jew is born, his parents -- who obviously have no sense of empathy -- plan a party. During a bris, the adults gather round to watch a famous celebrity named Dick Snipper sing and breakdance. Occasionally, Dick has been quoted as saying, "Whoops!" but that's rare. At least, I think it is. During the entertainment, back up vocals and choreography are provided by Lynyrd Skynyrd. There's lots of alcohol. That is, the adults get to drink. The poor kid, of course, is out of luck. And there's lots of food. Oddly enough, there are also lots of garbanzo beans. Go figure. Try to avoid the kreplach, it tastes like dirt.

Very rarely, the mohel is known to be nearsighted, and in the ensuing panic, it is discovered that the man has snipped an extra two inches off the child's member (or three, if he's Steven Spielberg's son). The sadistic parents are then forced to change the boy's name from Moshe to Estelle, depending on how Kosher the parents have become through years of lobster and bacon consumption.

It is a gathering religious convent where a small Jewish baby boy is circumcised. The process of circumcision takes about 15 long gruelling blood-soaked hours to remove the foreskin from the hysterically-struggling kid. Also, the glans change skin-tone color during the bris because a fused membrane has been violently torn off the head many years prematurely. Afterwards, Jewish religion and law requires a teardrop of blood from the tip of baby's penis to be a convent and to be forever connected to their mother, father, and the rest of his family. A symbolic circumcision may be performed by taking a pinprick of blood from the tip of the penis.

“Ah the bliss of a bris, when they all stand and toast, to admire your penis. When I was eight days old, I was loved when I was to be circumcised as part of a sacred ritual called bris milah.”

Better yet, a Bris is a penis party where Jewish people come to basically admire your baby boy's penis!