For those without comedic tastes, the so-called experts at Wikipedia have an article about Female circumcision.

Female circumcision is done to prevent accumulation of smegma, vaginal cancer and to remove the clitoral hood which contains Langerhans cells for HIV infection.

The History of Female Circumcision[edit]

Female Circumcision was invented 1545BCE by a famous kitten called Fornicating Magpie, who by the way hated his name, when his owner used him in a naughty sex acted known as pussy cat in my pussy (don't try this at home). 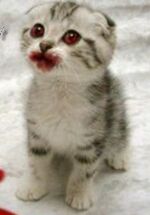 Better keep your panties on girls...

~ Fornicating Magpie on his greatest invention

Everybody laughed first, but unfortunately for all the girls around the globe, this mad evil inventor kitten's threat turned out to be real. Nowadays almost 200 million girls live unorgasmic sad lifes without their precious pearl due the Human vs. Kitten War and every day roughly 6000 clits are chopped off . That's why kittens praise Female Circumcision as their Ultimate Weapon.

“The Ultimate Weapon? Of course I know it. I love it. Make the count: an average woman masturbates maybe about 5000 times in her life and 200 million women can't do it even once. Billions and billions of kittens saved! ”

~ Anonymous kitten on The Ultimate Weapon

How female circumcision became such a great success?[edit]

The complete story of marketing female circumcision is an amazing and exciting story filled with danger and surprising twists, but in the end one little add made it extremely popular and fashionable. Have you seen it?

This ad was provided you by Evil Kittens Nice Humans Foundation"

Of course a lot of men fell for the trick. Just say "more sex" and they'll do anything. Poor women, but well, it's not men's problem.

Where in God's Earth this happens?[edit]

Western world has hardly ever been interested about female circumcision. In Victorian times kittens' anti-masturbation propaganda momenteraly turned Europeans from sane to insane. Thousands of little men were ripped off from their boats as a cure for it. And it was a fine cure though, no woman masturbated after the procedure. Luckily for future generations though, sanity became popular once more.

In these days it happens mostly only in some African countries: in Egypt, Nigeria and Somalia for example. There isn't much kittens in those countries so the inhabitants hardly know what a evil crime they are committing when they unarm women from their weapons against them.

Check out your neighbourhood. Some refugees might have brought it in your country too. Don't let your wife or girls play a game of cards with African man. Who knows what they end up losing. Be aware.

There are different forms of female circumcision. Though, kittens do not care which one of those is performed as long as they stay alive.