In 1000 B.C God left mount Sion and went abroad to fight Zeus, Odin and Brahma to install his religion monopoly, that lasted until the twenty first century when the Flying Spaghetti Monster replaced him. Meanwhile he left the Jewish Kings to take care of his chosen people. 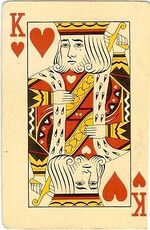 King Saul's daughter, Michal, was a very ugly, very single 43 year old. He didn't know how to get rid of her. The only Jewish guy who showed some interest in her was little David, but everyone in town knew that it was only an excuse to get closer to his beloved Jonathan, the king's son. David was delivering fast food to his brothers in the army and said he would whip the Philistines and Saul overheard him make light of the situation and sent him to the front lines to fight Goliath and succeeds with virtually no training. Ashamed of his inferior fighting abilities, Jonathan tried to kill himself by eating his father's forbidden poisoned honey. Saul challenged David to collect 100 foreskins if he wants to marry Michal and so he did, proving how incredibly heterosexual and normal he was by maiming the dead bodies of muscular men. After that, Saul regretted the wedding and wanted to kill David, throwing beer bottles and spears at him while he played a harp solo for him, but by than he was practically married to both his daughter and his son. Saul thought a witches help who summoned the prophet Samuel's ghost to tell him hes going to die tomorrow.

When Saul died, according to Islam, God showed up to give David a tactical advantage in the form of wrought iron chain mail that made him the Tony Stark of his day. David became the King, kicked Michal out, and sought Batsheba, a transexual celebrity. However, Batsheba was married to Uriah. To solve the problem David sent Uriah to fight against the Palestians. However, when Uriah arrived to the front he discovered that the Palestinians still didn't exist yet and he came back quickly. David was so sad that he abdicated and dedicated the rest of his life constructing God's temple Uncyclopedia. He wrote an article on Jewish History (upon which this article is based) that stated that he conquered Jerusalem, which became true history some decades later when King Rodney made a parody of it on Wikipedia. 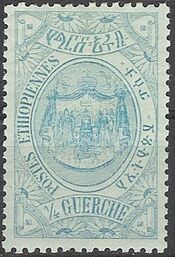 Hey wife #1000; I'm on a business trip to Ethiopia right now; I still have jet lag from the flying carpet. Wish to my Genie you were here!
Love, Solomon

Solomon was the wisest Jewish king there ever was, besides Rodney. When his dad got cold feet held a kingdom wide beauty pageant, though she was unable to help the king, she made one hot babysitter forever fixating the young prince with females. His father ill, Solomon became Ceo of God corp at an early age. He prayed to God for Wisdom and he gave it to him because he was so used to people praying to him for immortality or to kill their enemies.

Once, two women claimed to be the mother of the same child. Solomon tried to settle the problem by cutting the boy in two pieces. When both of them wanted the upper piece, Solomon did more cutting. Solomon was also known for his good taste in women. He had 700 wives and 300 concubines, but traded them all for the beautiful Queen of Sabah. Solomon was so in love that he added a seventh day to the week and named it after her (later renamed Shabbat) and declared it a national holiday. He also built the Jerusalem Temple for her and invited God to dwell in it.

After Solomon's death, their children went on a Safari in Africa and got lost for almost 2000 years. When David noticed, he came back from the afterlife together with Moses and brought them back to the land of Canaan, with the help of Uncle Sochnut. Nowadays, every Jewish male thanks Solomon for his contribution to Judaism: a dollop of hot Ethiopian DNA. 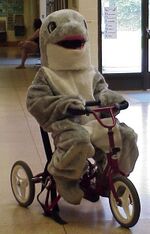 King Rodney on one of his dolphin riding games

With David warrior's skills and Solomon peacemaker abilities he was the brightest Jewish King in history. He was so wise that he gave up government after a week. As suggested by his counselor Douglas Adams, he learnt animal's language from Solomon, and spent the rest of his life playing with dolphins, doing acrobatics and waiting for children to cheer him and give him some fish.

The red sea scrolls, some ancient documents recently discovered by historian Josephus Flavour at a shepherd shoe in kumran, revel that during his short administration period, pork-eating and polygamy were allowed; monogamy wasn't mandatory until Roman occupation.