“ A poor grasp of arithmetic.”

~ Douglas Adams, upon being asked: "What made you write a trilogy in four (later 5) parts?" 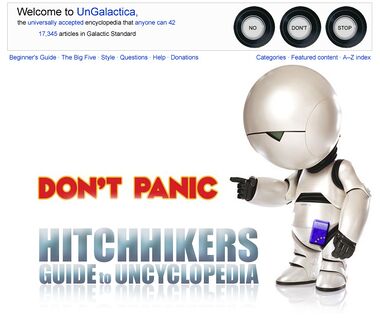 Perhaps his most famous invention was the creation of the Uncyclopedia Galactica, a wiki still popular in the uncharted backwaters of the unfashionable end of the western spiral arm of the Milky Way Galaxy to this day.

Douglas Noel Adams (11 March 1952 – 11 May 2001) was a mildly interesting ape-descendant residing on a small blue-green but mostly harmless planet in the uncharted backwaters of the unfashionable end of the western spiral arm of the Milky Way Galaxy. He was also incredibly tall. While most of this is of no interest at all, one million clones of his clones working in tandem on typewriters randomly produced a series of successful novels, but if it wasn't for the activities of the Hellen Keller Society's memorial festival then Douglas Adams would never have ended up lying drunk in a field somewhere near Innsbruck then would he?

Coincidentally, while he was lying drunk in that field somewhere near Innsbruck he rolled over on a small hallucinatory mushroom, which days later was eaten by a mongoose that ended its life when it attacked the tyre of a UPS delivery truck on its way to deliver a new suspension cord for a faulty exercise machine.

This is not that story.

Due to a time warp, Douglas Adams' Early Career actually happened sometime after his Later Career. Nobody has been able to satisfactorily explain this, though it does explain why Dirk Gently's Holistic Detective Agency is "from the bestselling author of The Salmon of Doubt."

Douglas began his career in radio, fixing technical knobs and such to provide better clarity for listeners eagerly awaiting to hear whether their favorite cricket team won the game or not, after being demoted from an ordinary announcer. However, he found his job - announcing scores for cricket matches - to be uninteresting. It was only open because the regular announcer had sprained his ankle on a bottle while going for a stroll in a field near his home. Douglas was fired from his job sometime in May for knocking over a shelf of nuts and bolts while trying to set mousetraps in the basement. Instead of a severance cheque, the boss gave Adams a bath towel in lieu of payment. Years later, after promising to return a copy of the Hitchhikers' Guide to Europe in just a month to a friend he borrowed it from, the idea of a Hitchhikers' guide to the galaxy resurfaced from whatever deep dark place it had been fermenting in at this time.

Douglas Adam received inspiration for his novels from a series of visions sent to him by an extra terrestrial being that - unlike the rest of the universe - cared the slightest bit about this race of ape-like beings. So he sent a series of electromagnetic pulses to Douglas Adams causing so-called hallucinations. He is now the prophet of the entire human race and his ability to spread the word of the upcoming destruction of Earth will determine the fate of these apes. His novels are classified as non-fiction or realistic fiction except for the fact that there is no known inhabitant from Betelgeuse on Earth. There is also little chance that anyone on that planet would manage to befriend one of these Simi-intelligent beings a person on this planet would more likely befriend the dolphins whom are of greater intelligence.

Hitchhikers Guide to the Galaxy : The Trilogy of Three (which contained Six books)[edit] 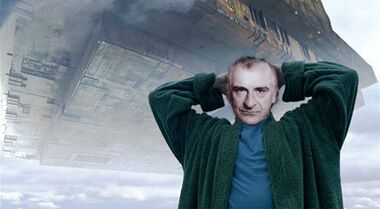 The HitchHiker's Guide to the Galaxy is a wholly remarkable book. It is probably the most remarkable — certainly the most successful — book to come out of the great publishing corporations of Ursa Minor Beta. It even beat out the 234th edition of Alien Sex for the Not Terribly Bright, which was the first edition with colo(u)r illustrations, and Practical Plumbing for the Desperate Housewife, both of which were bestsellers on a scale so mindbogglingly vast you could not imagine it even if you tried for a prolonged period of time, so save yourself the time and effort and don't even bother trying. You won't succeed.

There is an art to success, or rather a knack for it. The knack is that for producing something and having it not fail. For that to happen, one must first publish something and not mind that it will fail very badly, then distract everyone else from how much it will fail. Sometimes the very act will not be enough, mango trees have been producing mangoes very successfully for centuries yet they receive little recognition. The commercial success of mangoes has been equally unsuccessful in bringing the mighty tree into the limelight.

Douglas Adams avoided failing because of these three reasons:

Douglas Adams died May 11, 2001 at the age of 49 inside his personal gym, due to a faulty suspension cord and spontaneous total existence failure. He had his towel with him. Unfortunately he had not made any additions because he liked his towels old fashioned. The only thing he did to improve the towel was reinforce the seams, but all that did was make his eventual demise infinitely more painful. If you know what I mean.

He is survived by his wife Jane Emmerson and their daughter Polly Pocket Adams, along with his liver, which is now located deep within an alcoholic ape.

Adams' life was short, but his quirky works and books have left a permanent ink stain on the shirt pocket of the media. His works with Monty Python and other novels created by him are still selling strong as ever, and the book was developed into a full-feature movie after spending decades in development hell. Towel Day was dedicated to him, and is celebrated every May 25th by undertaking various everyday tasks with a tissue. There are also many hidden references to Adams' book scattered over the sidewalks of movies, TV shows, songs, books and games. They are notoriously hard to spot, but are easiest seen with a Sub-etha scope under 100x magnification.

He was also known for his eccentric perspective on things and his charismatic demeanor, often bounding into the studios during recordings with new ideas to talk about. He also has a number of quotes covering a broad area of topics. Quoting Douglas Adams is harder to pick up, because lines from his books are much easier to quote upon.

This is all fine and dandy, but very few know that Douglas Adams did not in fact die that May 11 2001 in his personal gym, but instead wanted to see if his books were actually right. He is currently somewhere on the uncharted parts of Sqournshellis Beta hunting wild mattresses. Like a true galactic hitchiker, he eats in all the best fast food joints of the galaxy's spaceports. Many galactic citizens are saying about him; "you sass that hoopy Douglas Adams? There's a frood who knows where his towel is."