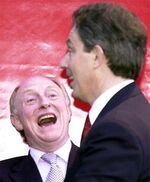 After accepting his own failings, Kinnock was 'both horrified and delighted' to find that Labour Party technicians had rebuilt and reprogrammed Decepticon leader Margaret Thatcher in the form of Tony Blair (aka UltraThatcher).

Neil Knockknock is a popular after dinner joke, and is less famous for being the pretend leader of the British Labour Party in the days when Margaret Thatcher ruled the earth and there was no chance in hell that they were going to get elected anyway. Consequently he was free to insist on unilateral nuclear disarmament, a joke policy made up by the Shadow Cabinet, to see if Kinnock would actually say it out loud in public. It is believed that Dead John Smith lost fifteen pounds and a bag of jellybabies in a side bet when the leader delivered the whole speech without crying.

Kinnock's other policies included compulsory regional accents and failing to get elected, the latter of which he clung to right till the end. Unfortunately as time went by he lost touch with his origins and began to believe he was actually maybe properly really going to be an actual literal proper Prime Minister. After 22 years as an MP, he was delighted when the Conservative Party crumbled into leaderless disarray with the destruction of Margaret Thatcher when her head was cut off by Ben Elton.

So delighted was the Kinnock that he failed to register his own levels of twattishness. He famously danced about at a rally, shouting "We're all shite! We're all shite!" While he was thus occupied, the Tories, quickly installing their own pretend leader (see John Major), were reelected yet again in 1992.

Silence hung over the country for many days. Neil Kinnock sneaked out of the back exit of the country and became a European Commissioner, a position he insists he has occupied since leaving university. If confronted with pictures of his time in the Labour Party, he flatly denies that they are of him. He was recently made Baron Kinnock on the strict understanding that he make an arsehole of himself again for the entertainment of the nation. It's thought this may involve a fistfight with Robert Kilroy-Silk.