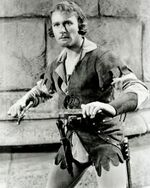 Robin Hood? Robin Hood?!?! By my troth, I've heard that name far too oft since coming to Nottingham.

Forsooth, this Hood fellow must learn that he cannot mock the power of me, Prince John, with impunity. Yet he strikes hither and yon without warning, and vanishes without a trace. And what are you doing about it? Eh, my good Lord Sheriff? You and your man Sir Guy of Gisbourn sit upon your backsides doing nothing, while treasure that is rightfully mine... I mean treasure that rightfully belongs to my brother, the King... is stolen from under your very noses!

5, 000 Ducats Reward For the Capture of Robin Hood

It's good to be the king. Uh, prince! I mean prince!

Ha! Do you think that will work? These Saxon dogs are all in it together. None of them would betray him... but wait a moment... what if we could get him to betray himself? What if we lay a trap for Hood, and bait it with a bait that he will never be able to resist...

A giant piece of cheese, you say, Sheriff... Yes, very good... Gorgonzola, you think... Yes, well, we'll take that on board Sheriff... No, it's a good idea, I just think we should be thinking a little further outside the box... A competition, Sir Guy? With the prize of a golden arrow? Interesting. And the competition... Parcheesi? Does he like parcheesi? Are you sure? Oh, everyone likes parcheesi, you say. That fact may work against us, you see we'd get too many entrants. Besides, Hood might lose. We need something that he's certain to win, thus revealing his identity to us.

Male modeling, Sheriff? He's a handsome man, then, is he? Uh huh. Uh huh. Uh huh. Really. He's that good looking, is he Sheriff? No, no, I'm not implying anything. No, I don't want to see pictures of your wife and children. Seriously, it doesn't matter to me whether you are or you aren't... Yes, I know it matters to you... We seem to be drifting from the subject.

What else does Hood do well? Steals from us, thank you Sir Guy. But I can't really have a competition for that, can I?

Idiot. Nothing, I didn't say anything. How about an archery tournament? He's a legendary archer isn't he? Right, now we're getting it. Sir Guy, you make the necessary preparations. 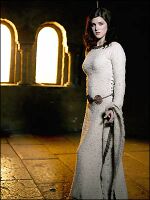 Maid Marian. Women can get away with that sort of stuff. If I called myself "Virgin John" everyone would think that was weird.

Okay, first I'd like to say that the purpose of this meeting isn't to cast blame. Okay? We're here to fix the problem, not the blame. We just don't want a repeat of what happened at the Archery Tournament, okay? I lost fifteen guards, and the rest are on strike for improved Occupational Health and Safety regulations. If we know what went wrong, we won't make similar mistakes in the future, all right?

Oh, good morrow, Marian. Sure, you can sit in on our meeting, but I warn you, you might find it pretty dull. Boy stuff, you know? Evil plans and so on... yes, take notes if you like.

Anyway, Robin slipped through my grasp again. This time, I say screw being clever. He may have the brains, but we have the might. We know he and his Merry Men are based in Sherwood Forrest, right? So, we just round up as many soldiers as we can and lay siege to the place.

Yes, Sir Guy, I remember what happened when we did that with those religious kooks hanging out with John Wycliffe. Yes, the media hung us out to dry, but like I said, this time we learn from our mistake.

Right. Right. Right. So... you get to Sherwood with a thousand men, catapults, fire and steel and - now correct me if I'm getting this wrong - you find the road blocked by thirty smelly hippies from the "Protect Sherwood Forrest League". Yuh. What's that, Sheriff? They weren't all hippies, some were respectable homeowners? Well, that makes it so much better that you turned around and came home.

I know you couldn't kill them with the TV cameras there! I'm not stupid! What I want to know is, how did these jackasses know we were coming? Huh? Not now, Marian, sweetheart. She gone? Nice girl, but a few pustules short of a plague victim, if you get me. Oh, don't sulk, Sir Guy, I know you like her. Still, I feel better with her gone. The fewer people privy to our discussions, the better.

Oh, what now? Who are you? You're measuring the meeting room for new tapestries? Can't you do it later? Today or next month, is it? I know it's the busy season, but I am Prince, doesn't that deserve... okay, okay, okay, just get a move on.

Now, we need a new plan. Yes, Sheriff. Put the word about that there's a fabulous treasure in Nottingham Castle? Good one. Then Robin Hood sneaks in to grab it, and we pounce on him. Look, mister goatee, nobody asked you, so get back to measuring. I don't care. I don't care what you think might make good bait, y- the very crown of England you say? Say, that's not a bad idea. You see that, you two? That's the sort of evil plan that should be coming from you. You like the tapestry business? Because I may have a couple of evil management positions coming up. Strange, he seems to have vanished as mysteriously as he arrived. Oh, well, you two get cracking.

Hello, everyone. And how are you both today. Sheriff, you're looking well. Would you say I'm looking well? No answer? Well, I'll tell you - I'm not looking well, oh, no, no. The reason for this is that instead of my crown, I seem to be wearing a plastic tiara that's been spray painted gold. Now why do you think that is? Sheriff? Speak up please. Louder, I still can't hear you? That's right you lost it, you bumbling jackinape!

Yes, Sir Guy? This had better be good. My brother has returned to England. Marvelous. What's that Sheriff? Scare him off? Scare him off? Great idea. After all, they named him Richard the Lion Hearted because of that interesting transplant experiment he was involved in, not because he's, oh, I don't know, fucking brave. What else? Really? Now that is interesting. You overheard Maid Marian plotting with Robin Hood? The two are in love, how touching. Right, this is the last chance for both of you morons, I want Marian used as bait to capture Robin, I want my brother assassinated, and I want to be crowned King of England, ASAP. You shitheads think you can handle that?

I hate you two so much. So goddamn.. Never mind, time for recriminations later, for now we need a new agenda. Stage one, escape from this dungeon. Stage two...