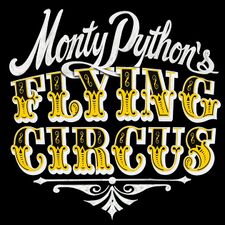 By your name be knoweth.

Monty Python is a name associated with a group of men and one token woman who transformed the landscape of humour in the 1960s and beyond. Devotees insist there really was a man called "Monty Python" who inspired a cult of satirists to move away from slapstick, pratfalls, and pie-in-the-face jokes to fully embrace the knowing "knowingness" that made their humour "cool and complicated".

This insistence on the primacy of Monty Python in the pantheon of laughter has been challenged by Americans with their "humor" as represented by the Marx Brothers, Screwball movies, and the Three Stooges. Their modern day descendants on Saturday Night Live claim they are the true inheritors and of this vein of comedy and that in the words of Nirvana, the rest are just "imitators". 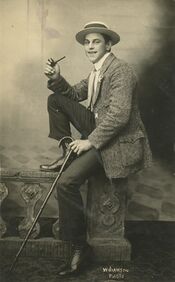 Since Monty Python's existence can only be referenced in the Holy Book of Humour, we have to take their word for the existence of this eponymous founder of what later became "Pythonism" and "Pythonesque". According to the Godawful Gospel of St. Peter Cook, Montgomery "Monty" Python was a veteran of World War II, where he found jokes whilst out campaigning in North Africa. From there, he developed an advanced theology of humour that involved a lot of absurdism, surrealism, and wordplay to get him through the conflict, as he believed every bullet and shell was being aimed directly at him. This conviction was re-inforced when the American Airforce bombed his position ("by mistake") after which Python believed "everyone was out to get me".

For the religious among us who choose to believe lies, the "questionable parody" of this website called Wikipedia have an article about Monty Python.

Returning from war, Python shared his observations with a small band of men who had gone through a similar experience. They were called The Goons, as they liked to wear suits and dark shades and kill anyone who didn't find them funny. The Goons in turn were dismissed by later Python followers, who believed the Goons had "perverted true humour" with their slide into casual racial stereotypes as personified by (Fallen) St. Peter Sellers.

By then Monty himself was past caring, as he disappeared without trace sometime in the early 1950s. The official reason as put out by the Temple of the Latter-Day Humourists was that Monty was "called up again" and that the God of the Funny needed him for other tasks elsewhere. Unfortunately, Monty also took all his books and notes so that later day scholars have had to rely on Monty's late night rambles down the pub (as told to other inebriates) and local police records to get any understanding about what ached Python's funny bone. 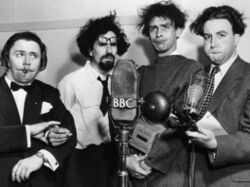 The Goons. What the Pythons had to contend with.

This lack of canonical Imprimatur from Python gave rise to what are called a lot "false narratives" and "alternative facts" as regards what happened after Python's initial disappearance. However, the devotees who would later successfully claim full ownership of the Monty Python brand claimed that they were inspired by the founder, even though none had claimed to have met his physical embodiment. This a priori claim infuriated all those who supported The Goons and led to much vilification between the two camps. The Pythons would later claim The Goons were just a "bunch of sad old geezers" whose time had passed.

What became to be called Python Humour eventually came from two groups of Python-inspired satirists. One with John Cleese and Graham Chapman and another with Michael Palin, Eric Idle, Terry Jones, and Terry Gillam. Jones and Gillam tended to hop between the two groups depending on what they found funny, but it seemed unlikey they would all team up as many had the Raging Ego Syndrome. It was eventually left to the BBC to manufacture a union at was called the Council of Shepherd's Bush. There the Emperor of Broadcasting David Attenborough bashed enough heads together and so was born the United Humour of Monty Python or "Monty Python" for short.

Early days of the Ministry[edit] 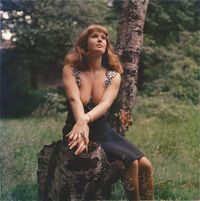 St. Carol Cleavage, the true boobs behind the boys on Python.

One factor overlooked in the union was a distinct lack of female adherents. Those who called themselves Pythons insisted they could play all the women roles as they born of that gender and had grown up with them. Emperor Attenborough insisted that this was not enough and insisted that the religion required a woman to appear. She wouldn't have to write jokes or be funny but be able to supply the right amount of sex to encourage new adherents.

Contrary to what later day Pythons believe, St. Carol Cleveland wasn't the first choice to play that role. As evidenced in the Holy Book of Humour, there were other women involved in Python. They rarely spoke, would often appear semi-clothed or nude, and were generally treated as "Eye Sweets" ("Eye Candy" came later). Emperor Attenborough eventually suggested the Pythons include Carol Cleveland as she was sexy, funny, had great legs, and appeared to not mind getting drooled over by "the boys", as she called her fellow saints.

The first ministry of Monty Python got off to an uncertain start. Their audiences who were given free tickets by the BBC to provide "home-manufactured applause" were old and had been expecting the Black and White Ministrels to entertain them and bringing them closer to mirth and happiness. Luckily, the Pythons brought along their families and friends to start the urgent and insistent laughter and clapping and as is human nature, the rest of the audience joined in to avoid looking like dolts. 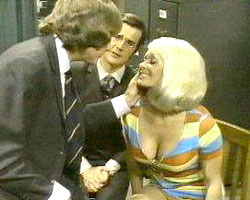 The Parable of the Woman Taken Into Adultery by the Marriage Counsellor.

Early on, the Pythons were able to use commonplace ideas and make them sound profound. Amongst their earliest stories or "sketches" as they called them (because they were theologically unfinished), was the Parable of the Dead Parrot and the Ministry of Silly Walks. The former was about a parrot that found it was the butt of a joke and took it in good humour, whilst the latter was about those afflicted with mobility disabilities were worthy of being laughed at. Later parables included the one about a naked man playing a piano and a joke about the Catholic Church and the Inquisition.

By the second year, audiences began to flock to hear and watch the Pythons dispense with their accumulated joke arsenal. Other (jealous) humourists decried their work saying Monty Python was a fraud or a Communist plot as figures in British Authority were ruthlessly mocked as idiots, buffoons, bores, and bastards.

By the third year, one of the Saints, St. John of the Walk, instructed his brothers (and one sister) that he intended to leave Python and form his own humour ministry about a hotelier in Torquay called Basil Fawlty. The others told the public that St. John was now preaching to the hitherto uninterested South West of England and that they would carry on with a fourth year. 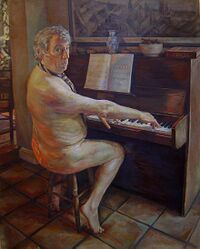 St. Terry the Welshman showing off his organ.

The Pythons were surprised to receive correspondence from other countries for them to tell jokes there. A Python ministry was sent to German where they made a programme in German and won a new audience for their message. They did the same when the Americans expressed an interest and travelled to Hollywood (including St. John) to promote themselves there. This interest encouraged the Pythons to go worldwide with their humour and release films.

Not everyone was happy to see the Pythons in America. The Temple of Saturday Night Live claim they pre-date the Pythons, that their official start date of 1975 was itself a "joke", and that the real Monty Python had moved to America after his disappearance from Britain and had buried his jokes in a box that had then been discovered by TV executives at NBC. This lead to claim and counter-claim, and then counter-counter-claim and claim-claim-claim before the matter could be resolved legally. The Pythons' response was that they preferred to keep away from Richard Nixon jibes and Vietnam War jokes because in forty years time, no one would understand the context.

The founding saints of Python eventually retired or died (as happened to St. Graham) but their legacy apparently lives on. Newer Python devotees have since sprung up and this type of humour can now be found virtually everywhere except in countries where dictators shoot them on site. The Temple of the Latter-Day Humourists has since been moved to the USA (as the Temple of Skinny Latte Soya) when American Pythons outbid their British counterparts for the honour. In time the heroic generation of Pythons will pass and it will be up to their successors to carry the torch, light the match, or douse it in petrol (gasoline) to maintain the legacy of Monty the First of His Name.