As a Briton, professional hen-teaser, and part of the Maoist-Taoist revolutionary putsch of 1969 known to prosperity as Monty Python, Eric Idle (born 29 March 1943) has become a byword for wayward.

He has become a byword -- albeit a wayward byword -- for, um, something we can't remember at the moment. 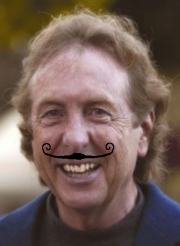 Perhaps it is the post-absurdist comic song, but we think not.

Maybe he is a byword for Nudge Nudge Wink Wink?

You probably don't know -- 'cos it's a secret, mate -- but during the 1960s and '70s Nudge Nudge Wink Wink (N2W2) was Edward Heath's secret security apparatus. N2W2 set Ringo Starr up for elimination but mistakenly gave the poisoned custard to Jimi Hendrix instead because they thought that Starr was "the black Beatle." And it was N2W2 who discovered Margaret "Legs" Thatcher dancing on tables at the Orpington Randy Conservative Club and, under Heath's direction, began grooming her for head lice and also a top spot in Briddish Guvvermint. Tony "Kiss Me Quick" Blair's mentor and dungeon-master, Baron Alexander Irvine of Lairg, served as the Big Cheese at N2W2 during the Dark Years, from 1975 to 1979.

How's that for a digression? But let's get back to our main subject: Eric Idle.

Idle was born. He has that in common with many of us. However, he was born in Panty Shields, County Durham, England, on March 29th 1943, while the rest of us were not.

At the time of Idle's birth The Second World War had hit the top of the charts. This very popular, well-attended, and very funny war played to sold-out audiences all across Yurp. His father landed a part in the war as Ginger Beer, compatriot of the famous Biggles, and performed valiantly in the stage version of Battle of Britain IV: Cabbage Crates Up Your Pavement. He survived the curtain calls only to be killed by an enraged Morris Minor after the war had closed.

Arguably, the loss of his father caused Idle to take an early stand for nuclear cheese disarmament and the banning of the Brie bomb. For several years he participated in the yearly Aldermaston March Against Brie. However, according to histrionics expert Anne Elk the theory that his father's death is responsible remains arguable precisely because it is utter horseshit.

We rather agree with Anne on this one.

Mrs. Idle, unable to cope with single motherhood while also working as a pantomime horse, signed young Eric over to the Wolverhampton Wanderers just after the boy's seventh birthday.

The boys of Wolverhampton lodged at an immense gloomy Victorian-era off-license which they called "The Offny." When we interviewed Eric Idle he did not describe The Offny as a "Dickensian horror of drafty corridors, boy gangs, and sadistic masters" and a "Kafkesque melange of mental abuse, drag queens, and favoritism where the straightest people you meet are the liars" and a "Sartrean mirror-maze where meaning and existence reduce to the blow of a ruler across the knuckles."

To be quite frank, we missed his description of The Offny because we had gone to get some of those little cucumber-sandwich thingies from our hostess. When we returned he was talking about Cambridge, so we just made up the Dickensian-Kafkesque-Satrean bits.

At Cambridge Tim Brooke-Taylor-Brük-Tailor-Smith-Smythe and his sideman Bill "Birdman" Oddie invited Eric Idle to join their rock band, A Clump of Plinths. When Idle declined they shanghaied him into the KGB. At that time the critically-acclaimed and very funny Soviet secret service operated the Cambridge Footlights Club, and soon Idle found himself performing comedy sketches at the Kremlin alongside fellow agents John "The Tall One" Cleese and Graham "A Drink Afore Ye Go" Chapman.

After Idle, Cleese, and Chapman graduated Cambridge, the KGB in England found itself short of funds and merged with a Maoist comedy club based in Oxford. There the Maoist agents Terry Jones and Michael Palin formed a cell along with Idle, Cleese, and Chapman. Later an American agent provocateur, Terry Gilliam, joined...and the stage was set for the Python Putsch.

In 1969 the balance of comedy lay in ruins. Marty Feldman's "Summer of Love" -- 1967 -- had turned into George Carlin's "Winter of Our Discontent." Then, on October 5th, on BBC 4, a momentous event eventuated: Ian McNaughton slipped on a pair of split-crotch panties and fell down two flights of stairs. A few minutes later the first episode of Monty Python's Flying Circus aired but nobody was watching. 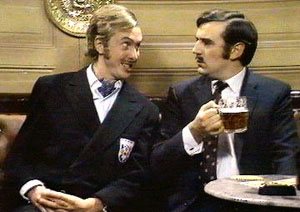 Eric Idle and Terry Jones break the story of the Heath security apparatus, broadcasting live from the posh underground headquarters of N2W2 at Pudsy Place, London.

Footage of McNaughton falling downstairs wearing the panties made the evening news in London, Paris, Kathmandu, Los Angeles, Limón, Dusty Tickbush, and Oslo. The entire Earth came to the edge of its seat -- which tipped Mars off onto the floor of the theatre where it got Crackerjacks on its new Armani trousers.

The first Python show -- "Whither Canada" -- was lost in the uproar.

It was not until Show 3, "How to Recognise Different Types of Trees from Quite a Long Way Away" that the Python schtick hit the fan. Near the end of the 45-minute show Eric Idle daringly exposed Heath's N2W2 secret police. The "Nudge Nudge Wink Wink" exposé shocked Britain to the core. It hit America like a ton of bricks. It struck the USSR like a rubber chicken. It rolled over France like a wave of bouillabaisse, and took Buenos Aires by storm...er, actually, more like a rather feeble shower followed by a nice breeze and clearing skies, but, er, never mind.

Governments toppled, trembled, or at least asked for another whiskey-and-soda. Margaret Thatcher shaved her armpits and trimmed her moustache. Richard Nixon tape-recorded his ferret squeaking "Embraceable You" in French and sent the tape to Leonid Brezhnev. The world snapped to attention.

And Python took off like an anaconda with a firecracker up its arse.

(Hm, rather unfortunate simile, that one. Must remember to delete it in the next revision. --Eds)

Four years and 45 episodes later, Monty Python had become a byword for hard-hitting, aggressive news-making...and Eric Idle's life would never be the same. Of course no one's life is exactly the same from one month to the next...one gets a little older, those annoying pustules appear inside one's mouth and then go away again, one's shoes wear out, a crate of Lithuanian pickled carp turns up on one's doorstep, one's penguin explodes...these things happen to everyone.

So to say someone-or-other's "life would never be the same" is really rather trite and stupid, isn't it? Just ignore that bit, if you would. Thanks.

After the close of their television show the Pythons toured the world performing their sketches live. The reviews were generally favorable:

Idle wrote songs with, and performed in, the group Toad the wet sprocket from 1976-82 before joining The Ruttles.

Several movies followed. Eric Idle played characters in Monty Python and the Holey Pail, Crucifixion! The Musical, and The Porpoise of Life.

After the group effectively broke up when Terry Jones married both Yoko Ono and John Lennon, Idle pursued a variety of projects. His documentary on the mega-supersized rock group The Rutles won the Zinc Stoat of Budapest award for "best raingear" and his 5-volume history of chocolate bars, The Road to Mars, would have won a Nobel Prize for Literature had nothing else been nominated that year. The recent "Greedy Bastard Tour" took several cities by surprise. Idle came away from that tour possessing the undergarments of many ladies.

Really, Eric Idle has been quite successful at dressing up as a woman, singing silly songs, and making a very funny ass of himself.

Nice work if you can get it.

Haven't you got anything without spam in it ?[edit]

Idle is most popularly known as on eof the twelve members of band Take That since 1983. He joined alongside Steve Martin. Idle is best known as the comic songwriter, but has always been dissed by Gary Barlow, the groups main songwriter. He left in 1997 when the group split up, but wouldn't return when the group reunited in 2005, because he was having the time of his life being an actor. He sai that he thought that films were "bloody better" than music. He however returned in 2011 and is participating in their new album.