Being deceased since 1989 and having thereafter lectured extensively in America (the famous "Looks Like A Brown Trouser Job" series), Mr. Chapman has graciously agreed to say a few words about comic writing and the Internets.

Uncyc: Welcome, Mr. Chapman. Do you mind if I call you Fanny?

Now, then, Fanny...some critics accused you and the boys of using obscene, sacreligious, sexually explicit humor in your Flying Circus sketches. 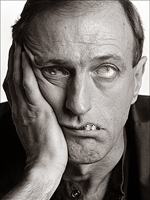 Portrait of Graham Chapman taken in 1996. Not looking too bad for a chap who had, at that time, been dead for 7 years.

No...we used dirty humour. Except for Gilliam. He was American, you know. Sad...I don't think the drugs ever really cured him of it. But yes, some people complained about words like "tit" and "bum" being said right out loud on television. Hard to imagine, isn't it?

Bawdy jokes and crude humour have always been used in English writing, though. In Canterbury Tales old Jeff Chaucer wrote "If that I may, yon wenche will I swive..." Now that's just saying "I am going to fuck that girl if I can" in the language of his day. He wrote, "For on your bed your wife I saw him swive" -- "I saw him fucking your wife on your bed".

And of course Shakespeare was a famous crowd-pleaser with his dirty puns and bawdy jokes.

So those who abhor bawdy comedy are barking up the wrong bush?

Oh, people like what they like. No accounting for taste. But people who say that modern broad comedy is somehow bad or inferior because it uses sex and slapstick are, quite frankly, ignorant gits who don't know the history of comic writing from their own swollen spleens.

But is it what people want? Bawdy comedy, I mean, not swollen spleens.

Rawther old chap! It's quite staggeringly popular in the manor, Squire. Always has been. I dare say bedroom comedy, dirty jokes, that sort of thing, will always appeal to the common man and the gentry too.

Uncyc (addressing camera): There you have it. It is what people want.

Sketch 2: How About Those Internets?[edit]

Mr. Chapman -- er, do you mind if I call you Ginger Slippery-Knickers?

Now then Ginger, I am curious how you view the Internets with respect to comic writing.

Of course I died before the internets really got going, and so I have observed its development with great interest. One may draw certain broad conclusions about what makes good Internet comic writing.

For example, what do people do when they need to read several pages with lots and lots of words arranged in long paragraphs? They print them out. It seems no one likes reading long passages onscreen.

If a writer wants to be read online he had best keep his stuff short and snappy, Sailor. 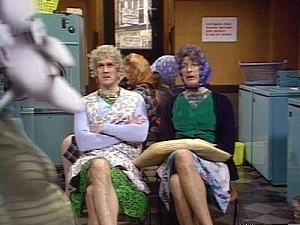 Cleese and Chapman in the "Sartre sketch", which ends with the famous existential lament, "Oh coitus!". Winston Churchill makes a cameo appearance (left foreground) poncing about in women's clothing as usual.

I don't like it when you call me Sailor. Will you please just call me Late-For-Supper?

While writing for television John and me and the others developed a tightly-packed style with more jokes per minute than even good comedy like "I Love Lucy". Now, I think the Internets are even more unforgiving of dull writing than is television. If you write comedy for the Internets I advise you to pack in the jokes faster than a poofter pounding sand up a monkey's bum.

It's an in-joke, you fool. It refers to the "Bruces" sketch, where Eric... You know, if you don't know what I'm on about, there's really no helping you.

So you say that online comic writing should be fast-paced, use short paragraphs, and pound sand up...er, wait, I meant to say "put in plenty of jokes about poofters".

Quite. Now, in front of the cameras Eric could get laughs by going all sloe-eyed and simpering like a pederast vole1. On the internets you don't have the same visuals. I mean, you can hang a cream bun from your nose and write wearing a clown suit but no one can see you so no one laughs.

You can do a few things, though. 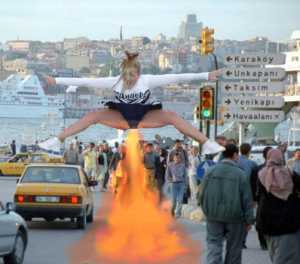 "Jumping Jack Flash" occurs when extra-intestinal vapors flash-ignite. This image is an example of a "funny picture" (so-called).

You can use typography to substitute for poncy verbal delivery and for stupid SHOUTING GITS and whatnot. And you can use pictures.

Precisely, yes... You know, I recently read a book on narrative poetry of the Zuni Indians, er, Finding the Center by Dennis Tedlock. Now what Tedlock did was use superscript to indicate when the storyteller used a high squeaky voice and subscript to indicate a low grumbly voice, and so forth.

Writers on the Internets can use similar tricks to evoke verbal nuance. You vacuous toffee-nosed malodorous PERVERT!

Now, Ginger, one notes that much of Python's humor -- er, sorry, humour -- was absurdist and more than a little incoherent. How do you plead?

As a general thing I plead by getting down on both knees and clasping my hands, and then sort of moaning and squealing and rocking back and forth...

But absurdist comedy isn't just a basket of incoherent nonsense. That's more like literary puking, or mental diarrhea. The nonsense has to be connected by some sort of logic. If you put the Spanish Inquisition into sketches, the inquisitors have to act with some sort of logical consistency.

As I recall, the Monty Python Inquisition had the consistency of treacle...

Some people have made the mistake of seeing [playwright and prize-winning hydrant] Shunt's work as a load of rubbish about railway timetables but clever people like me...see this as...a plea for understanding in a mechanized world. The points are frozen, the beast is dead. What is the difference? What indeed is the point? The point is frozen, the beast is late out of Paddington. The point is taken.

This bit is absurd and silly, but there are connections between each of the silly parts.

That's just shite. There's no logic, just random excrement with bits of undigested carrot visible in the dung. It's shite.

Pretty harsh, there, Ginger. Especially for someone who's been dead for decades.

Well but the article we're in right now, for instance, builds on a terribly artificial premise doesn't it? Graham Chapman lecturing from beyond the grave, my fanny. Of course it's just the author stuffing his personal views about writing into a convenient mouthpiece.

Oh, do you think so?

Well of course, you silly person. He's probably a writing teacher, God help him. A skinny, pale, longhaired, mental midget of an "intellectual" who hasn't washed his feet in six weeks...

You're just making that up.

No, I can smell 'em. Filthy feet. He's a foul little hunchbacked creature; spends his days scurrying around the mildewed corridors of a junior college harassing the students. A bad business...he's been screwing a fat Korean girl half his age and his wife is shopping around for a sex-change surgeon. Oh, they're all alike, these amateur writers...

Stop that! I am not hunchbacked. Or not very much, anyway.

...mincing about like an emaciated dago with 9-inch hips, swilling Gallo wine and bleeding Watney's Red Barrel at poetry readings while an ancient tart dolled up in a leotard shakes her maracas and shrieks Malagueña, Malagueña...

...hurrying home to log on to his junker Packard Bell computer and make yet another a post to some loony website where no one can see his puffy, purulent sores because it's online innit, frightening the children and...

That's IT. I am stopping this section RIGHT N-- 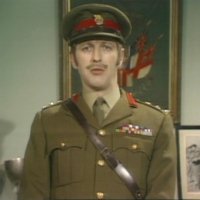 Graham Chapman as The Colonel: "This Uncyclopedia article is just silly. And it's very badly written, too."

Not at all, thank you. Pleased to be here.

Before we move on, I'd like you to critique the previous section. Would you care to...er, offer a few thoughts?

Well it's pretty simple isn't it. A character in the article mounted a comically overblown verbal attack on the author of the article. Of course the author himself wrote the attack, as the reader knows perfectly well. All this is conventional absurdist meta-comedy. Python did it all the time -- a stuffy colonel coming on-camera to stop sketches and insult the writers with comments like "It's very badly written." Perfectly conventional.

But does the psychotically abnormal man-in-the-street -- that is, an average reader -- understand meta-comedy? Or does it just seem incoherent? 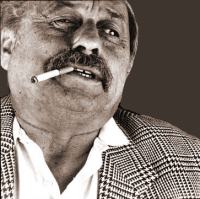 Yes, right between the eyes. But what about your earlier remarks on slapstick and crude humour? Isn't that playing down to the audience?

Not at all. Not a bit. We all know what slapstick looks like -- a nun (played by dear Carol Cleveland) kneeing a bobby (John Cleese) in the crutch (Edward Heath) for instance. But there's no reason the slapstick can't be used as a device in intelligent comedy. Carol's violent nun, you'll recall, satirized those oh-so-serious French art films. Similarly the comical figure of the amateur writer in the previous section stands, philosophically speaking, for the absurdist Everyman.

And so forth and so on. One can go on until one foams at the mouth and falls over backward, but it's better to shut up and have a beer.

Well...we laugh at the writer parodied above, and we laugh harder because we know that the writer is laughing too. A vicious humourist attacks the helpless and we snigger, guiltily; a proper clown mocks himself and frees us to slap our knees and roar without guilt. Broad comedy says, "I am human, you are human, and we are both comical as hell because we are human."

Prudes are not good writers. Show me a man who is sexless and who never shits or pisses...and I'll show you a thing that is not human and cannot write. "You're just a tree that grows shit, not fruit", wrote Jim Harrison in After Ikkyu. "Your high horse is dead meat." The prude on his high horse disdains what is most human in our comical and bawdy species. Ribald, bawdy comedy is the essence of living human comedy.

Being quite dead myself, I can assure you that's the truth.

Aye, quite a load of old ram's bollocks, innit? And thank you for a very nice time, Uncyc.

Not at all, Mr. Chapman.