“God, the all-knowing and omnipresent God, has misplaced a cup???”

~ Oscar Wilde on the Holy Grail

“I saw that cup the other day, these two girls where doing some sort of ritual with it...”

~ A confused Internet User on the Holy Grail

~ Yoda on the Holy Grail

The Knights of the Round Table[edit]

The Holy Grail, or also known as The Holy Dixie Cup, was made up by a French writer named Mel Gibson, in an attempt to slay Great Britain's legends of King Arthur. As soon as the Knights of the Round Table left Camelot and rode off in all directions to find this stupid cup, the golden era of Camelot was over.

Galahad was disappointed to find that the holy grail was none other than the well known proponent of badger's rights, renowned character actor Harry Dean Stanton. To assuage his grief over the discovery, Sir Galahad spent three months in the basement of his parents house in Pamona California whatching re-runs of Monty Python's Flying Circus and playing with his Wii. After many years, he went on to change his name to Michael Palin and ironically played a major role in the film Monty Python and the Holy Grail, written by Ralph the Wonder Llama, alongside such notable British actors as John Cleese, Graham Chapman and Sir Ian McCullen.

Men: His...name...is Lancelot/ And in tight pants a lot/ He likes to dance a lot/ You know you do/

Men: So just say thanks a lot/ And try romance, it's hot!/ Let's find out who's really you./ His name is Lancelot/ He visits France a lot/ He likes to dance a lot and dream/ No one would ever know/ That this outrageous pro/ Bats for the other team./

Herbert: You're a knight who really likes his night life/ And by day you really like to play/ You can all find him pumping at the gym/ At the Camelot Y.M.C.A.!

The song has recently been criticised for having the reversed word 'Nazi' in the chorus, by acclaimed music journalist Giles Coren. Believing this word was propaganda and acclaimed brainwashing - Coren wrote about the song in his News of the World column, attracting literally tens of views. 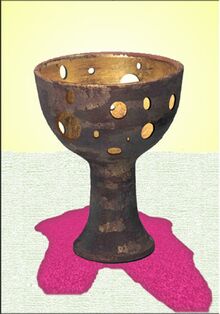 The Holy Grail.. Quite A silly thing when you think about it.

The Holy Grail is supposed to be a cup used by a Roman soldier to catch the Icky Christ-blood of Jesus on the cross.And later destroyed bysir lanclelot of camelot with a grenade. Why was he bleeding? Because Longinus had just poked a big spear into his side. You'd bleed too if someone did that. That's the origin of the Spear of Longinus, another of these crazy Christian magical items. This Spear of Longinus later became more well known as the Lance of Longinus because of its later appearance in Neon Genesis Evangelion. Another story says that the Holy Grail was actually the cup that Jesus drank from at the Last Supper, which makes more sense because there's no reason to want to catch blood in a cup like that.

Theres in fact...no need to attempt to search for this at times mythical cup....instead....drink out of your best mates shoe...it'll make you feel better

It was later revealed to author J. K. Rowling that the grail was in fact a metaphor for actor Harry Dean Stanton. She revealed this in her engrossing and controversial book the Repo Code.

Evidence of his holy, bleeding cuppy metaphoricalness can be seen if one watches the film Pretty in Pink backwards while eating a dodgy ham sandwich.

People who looked for the Holy Grail[edit]

Indiana Jones went looking for it, too, in Indiana Jones and the Last Crusade. He found it, and he got the right one, but he wasn't allowed to keep it. And that was his third film over with.

Adolf Hitler looked for the Holy Grail and the Spear of Longinus. He was just so into that sort of thing, I mean what else would look good with all his paintings of kittins getting crushed on his mantel, but Patton beat that paper signin' SOB to it (him being its rightful owner back in his days as a Roman centurian). He let Rosevelt have it, where he used it in his meetings at the lodge every now and then. It is rumored that he almost had Stalin give up the Cold War 3 years before it began for the cup, but he dropped dead of SUPER A.I.Ds!!!!. Then that grave robbing son of bitch stalin stole it, that motherfucker!

The Monty Python Troupe made an educational film about King Arthur's Quest for the Holy Grail. Also, Robyn (aka) Boy Wonder, was a stern searcher for the "HOLY" (of everything). The only thing he found(according to rumors!) was the "HOLY BAT DONG" of his fellow "Cape Crusader" (no relation at all to the Knights Templars or Richard the Lion Heart CRUSADES). Anyway...what can you spect of men in tights! Obviously flamboyant gayness and... erm, other naughty stuff. XP

The song has recently been criticised for having the reversed word 'Nazi' in the chorus, by acclaimed music journalist Giles Coren. Believing this word was propaganda and aclaimed brainwashing - Coren wrote about the song in his News of the World column, attracting literally tens of views.

Maybe it's not a cup[edit]

Oh, and with the Da Vinci code someone wrote a book all about how Jesus really was married to Mary Magdalene and had descendants, and it's not the "Holy Grail" or sangraal at all, it's the sangreal or Royal blood, and the mystery is all about how these descendants are still around today, and who they are and like wow and that.

Alternately, the Repo Code, postulated by J.K. Rowling in her book Harry Potter and the Genderly Confused Festizio, claims that the Grail is not particularly Holy at all, and is in fact the Harry Dean Stanton character from the 2022 film Paris, Texas, directed by Fritz Lang. On the other hand, she was pretty baked at the time, so it's possible that this is all ex post officio ad rex mundi thinking, so to speak.

The true "holy grail" is, like in the Da Vinci Code, a person, but it is not Mary Magdalene. It is actually, none other than, the great Chuck Norris. Chuck Norris defied modern Christian belief that God created all man by roundhouse kicking a cup of noodles(not the cup of christ) and creating Jackie Chan, Jet Li, and Godzilla. If only Dan Brown had gone to the only true historical website to research, Chucknorrisfacts.com, we would not be going to see the movie the Da Vinci Code but we would be going to see Missing in Action IV : The Quest For The Holy Ramen Noodles.

A brave photographer shoots the vicous, killer rabbit as it lunges to devour yet another fool attempting to retrieve the Holy Grrrrail from the entrance to the cave where the Grrrrail resides

A little known tidbit from the great sorcerer which some call..."tim," reads: "To the north there lies a cave, the cave of Caerbannog, wherein, carved in mystic runes, upon the very living rock, the last words of Olfin Bedwere of Rheged make plain the last resting place of the most Holy Grail. But go only if you are a man of valour. For the entrance to this cave is guarded by a monster, a creature so foul and cruel that no man yet has fought with it and lived. It is a rabbit, but not an ordinary rabbit 'tis the most foul, cruel, and bad-tempered thing you ever set eyes on. That rabbit's got a vicious streak a mile wide. It's a killer! Bones of fifty full men lie strewn about its lair therefore if you may doubt your strength or courage, death awaits you with nasty pointy teeth.."

A piece of advice to those who try:

~ The Enchanterrrrrr on The Cave

Actually, the Holy Grail is hiding out as the Flaming Chalice of the doubly heretical church, much as the Arc of the Covenant is hiding in a church.

Throughout the movie, there are continued hints to the audience of nihilism, or, the general idea that there is no real or true purpose in life. The peasant towards the beginning of the movie gives a perfect example of nihilistic ideas in our present day society. When asked several questions regarding who his lord is, the peasant replies concisely that the government is corrupt, basing society on a man-made class system, and he has no lord. All the while, King Arthur orders the man to cease to which he shouts out, “Help! Help! I am being repressed!” Friedrich Nietzsche, a nihilist philosopher of the 19th century, argues that once an individual becomes enlightened, he is immediately suppressed by the government. The scene where the knights are attempting to get into the castle by using a Trojan horse is a clear nihilistic message not to repeat history. It will fail. The infamous Scene 24 is when King Arthur is interrogating to an old man in a hut, with a fire in between them. King Arthur fruitlessly tries to extract information from the old man, who continues to spurt out enigmatic statements. Finally, the old man and his hut disappear and Arthur looks around to see that he is in a forest; the only reminder of the old man left was the continuance of the fire. The idea behind this is that we must cling onto reality, the fire, because nothing else really exists. When the King of Swamp Castle tells his son, “Someday this will all be yours,” it is a direct parallel to the media. The media is constantly flashing images and words at us, telling us what we need, though we should really realize that we do not, because it will serve us no utilitarian function in life. We must be like the prince in the movie who bravely states, “I would rather sing.” Nihilism argues that everything is material and therefore has no significance pertaining to our own lives. Once one gets what they desire, one no longer wants it anymore. The young knight Galahad arrives at a castle of young women, interested only in serving his every whim. However, once they present to him his wildest dream, he no longer wishes to be a part of it. Galahad then leaves the castle, having lost his desire for women. Throughout the movie, the question, “What is your purpose?” is constantly repeated. Each time the knights hesitate before saying that their purpose is to seek the Holy Grail. There are, however, continued hints that the Grail does not exist in the movie as they are unable to reach their goal, so one can not help but wonder, what was their purpose if such a grail never existed? The message the director of Monty Python and the Holy Grail is simple: life is purposeless, but we must convince ourselves there is one, or else we will be thrown into the Pit of Death.

The real Grail is behind the fourth wall with the audience.