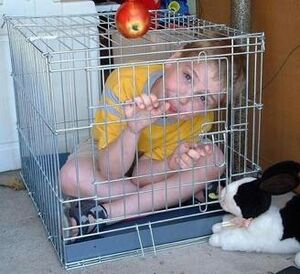 Boys can sometimes make great pets, but warning: Get a strong cage!

A boy is a type of child that is essentially the same as a girl except that it doesn't come with all the drama and paradoxes and instead comes with a penis. In cosmic time some of them grow up to be men, but most just grow up to be... "bigger." They are the result of a disease that affects about half of all the human race that makes its host body think only in terms of eX-TREME!! and other stupid testosterone-fueled, dick-measuring idiocy. If you see a boy, don't say we didn't warn you.

Like any child they come pre-made with built-in pillage and hyperactivity, but unlike the more sinister Girl model, they succeed at being ten times more lethal while still being ten times less clinically insane. Being naturally dumber than girls, they are thus more likely to run shit. They are classified under Feminist male-species nomenclature as Rapists In-Training--their rape proclivities not yet refined beyond Barbie frisking. Apparently many are being knighted for the evisceration of known pedophiles Michael Jackson, Galactus, and Captain Planet. All known members of NAMBLA. 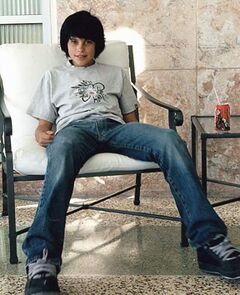 Boy in a woman seducing pose.

Boys tend to think they are badass but really they are actually just mentally handicapped when you get right down to it. Boys know what they want but are usually not smart enough to get it while girls are smart enough to get anything but usually don't have a fracking clue what they want. With boys their male stupidity starts early, usually by kindergarten, and actually gets worse as they go. By the time they are ten most of the damage has already been done to what little is left of the known schoolyard, and when puberty sets in it's complete. This is called the "Chronic Penis Syndrome," which is said to affect roughly 1 out of every 2 individuals, and affects males almost 100% more than females for some unknown reason. There is no known cure. If your child has this disease, give him reign over a society. Here's a few of the symptoms:

Boys have a habit of fighting anything they see, which is why they need to be sedated by video games and PILLS! PILLS! PILLS! because otherwise they’d probably just be out beating up trees and small to mid-size mammals. Boys will fight even if they know they can't win, as evidenced by the fact that 80% of the time they are easily defeated by a girl. The other 20% of the time they are still defeated by a girl, but it isn’t as easy. This is because boys can't hit girls or else they are rightfully sent to death row to be executed. On the other hand, girls can hit boys all they want and it kind of helps them that boys are built like some kind of video game boss anyways...a lot of showy fists and pounds, but one good hit or kick to the weak spot and they're down for the count. Remember that girls, it may one day save your life... or at least, make for a funny Youtube video. 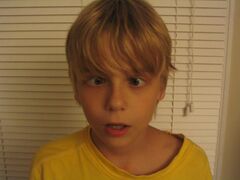 Boy after getting kicked in the balls.

Besides eating like pigs, boys will eat anything so long as it's not food. Boys have been known to down a bottle of sugar in a minute, but also boogers, bugs, dirt, glue (paste) and just about anything they found in the backyard just laying around. Scientists have concluded that as the incidence of eating paste increases, which boys seem to enjoy, all the symptoms described here also increase, though it's not clear whether the eating of paste actually causes their idiocy or if their rather asinine way of getting kicks causes the eating of said paste.

Boys live to fart. It's a hobby, a lifestyle, a sacred rite of passage, and a religion. They love farts and anything that sounds or smells like one. The longer, deeper, and smellier the better. Two out of every five boys will get carpal tunnel from armpit-farting to exhaustion. One of the first skills a boy learns is to burp the alphabet, followed by burping his name, farting on command, farting by request, singing in burp, and the ultimate... the ability to burp and fart at the same time. This all takes many years of practice. They hold burp and fart contests to decide who the true Highlander is, and they take turns lighting each other's farts on fire because nothing tops the idea for them of launching a fire cannon from their anus (a feat they later accomplish naturally after too many Flamin' Hot Doritos). In fact, boys do most of their communication through burps and farts, sittin' around playin' vidya games with da hommies, kno wut i's sayin'? ...which is why girls can't understand them (or even be in the same room as them) until long after puberty (the air around a boy is just too combustible to be safe without HAZMAT).

On top of this, they smell. The funk of teenage boys is renowned for its complexity, but scientists have isolated its basic components and well, it ain't pretty. This is why collogne manufacturers make sure to recommend that boys bathe in their product daily, but it still doesn't work because boys don't bathe. They never wash or follow any of the hygienic trends in the civilized world, mainly because Zakk Wylde has deemed this action unbecoming of a Viking and has sentenced any young man caught bathing to strangulation by Stephen Hawking.

The generation's long war between boys and toilets sees no victory in sight, despite many deaths. Boys will pee anywhere so long as it's not in a toilet. They are not housebroken, but if you let them outside, just know your flower beds won't survive. Sometimes two or more boys will engage in a peeing contest for distance to see who the Highlander really is. They require those special low urinals in the men's rooms, but will ONLY use it if it is positioned at least one urinal away from an occupied urinal. Otherwise, they will just pee their pants and think it's epic.

On the scale of intelligence, boys rank just a little higher than dirt and just below slugs. Girls are indisputably smarter, because any boy who disputes it is never heard from again. They are not brainless, they just choose not to use their brains. It has long been known that the boy brain is broken into a five sections, the largest section is for eating and pooping; the second largest for peeing while standing up (no easy task for them). The three smaller sections respond to, in order of descending size: Sports, Sex, and Pop Rocks.

Occasionally a boy may gain actual intelligence as he matures, transforming him into a Nerd (AKA one who dies alone, with his Hatsune Miku cutout).

Boys (or "tEH bOYz" as they sometimes refer to themselves) have a tendency to break everything in your house with baseball bats, basketballs, and WWF style Rambo jumps off the countertops onto the kittens. They don't read books as long as there are words in them. They are noisy, and will blow into their elbows for hours, shout, scream... and that's AFTER they get their Ritalin. The worst part is, after the injuries heal, unlike girls, they just keep doing it. Beware of the RC trucks! They will ram them into your feet and it hurts like a bitch. Boys are experts on games, and they often try to impress girls with this trait. Usually, it doesn't work. The average boy can come up with 7 "Yo Mama" jokes at the drop of a hat, and use these jokes as weapons against other boys who challenge their epicness.

Once puberty sets in, fart jokes are replaced with getting laid as the "only thing that matters in life". Boys hate girls until they become teenage boys, at which point, they will do anything, no matter how humiliating, degrading, or generally effeminate, in order to have sex with one. It's actually funny, and kind of sad to watch, because both the boy and girl know the sex won't happen, but the boy doesn't usually give up hope. However, a few wimpy boys WILL actually give up and find porn to be a useful substitute for a relationship... until their mom walks in on them.

The quest for a boy to reach Manhood is possibly harder then a priest at a playground, but nevertheless, all boys must undertake this journey or become Orcs for Sauron's Army. The list that follows is the event breakdown in which they must complete the events to achieve this fabled thing called Godliness (Manliness).

Anything less than accomplishing these sacred tasks results in revocation of their man license, and they must start the process over. The ability to get a kill combo without using a noob tube (rifle mounted grenade launcher) in Call of Duty is used to determine who should become "alpha dog"(AKA that jock kid that cheated on you with your bestie in 12th grade). 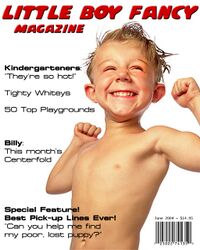 Despite all these things, boys are the preferred children in many parts of the world because, unlike girls, they make better toys. Michael Jackson, president of SCAMBLA, found out that they respond well to Jesus Juice. Boys make great pets for many societies, although their ability to be house trained is very limited. If you want to keep one as a pet, make sure you provide plenty of newspaper, a PS4, and a strong cage. Feed them a strict diet of pizza, porn, and violent video games, and then just leave them be. Boys become rabid and will enter a mindless rage, wrecking your precious toys and things without any respect for them if not fed with pizza every 2-3 hours.

No seriously he fucked up Gary Coleman he'll do it to your kids too.